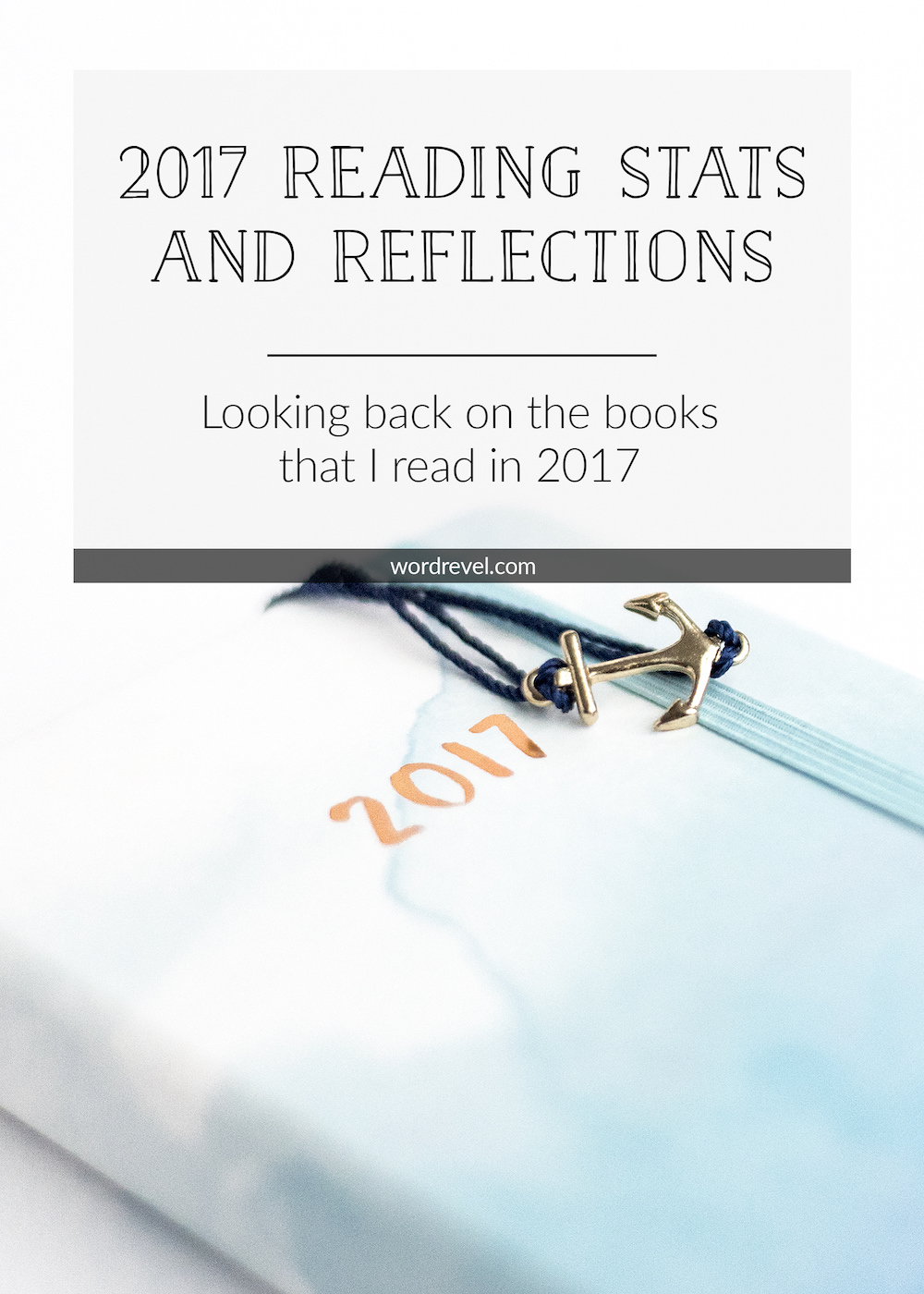 Last year, my goal was to read at least a hundred books. That’s been my goal every year since 2014. In the end, I exceeded it a fair bit with 129 books — 127, if I exclude the re-reads of two books that I read twice within the year.

On average, I read 10.8 books, 2047 pages, and listened to 40:35 hours of audiobooks per month. I wasn’t consistent throughout the year, though. In the extreme cases, I managed to read as much as 16 books in a month and then only 4 books during another.

Number of Books I Read Each Month 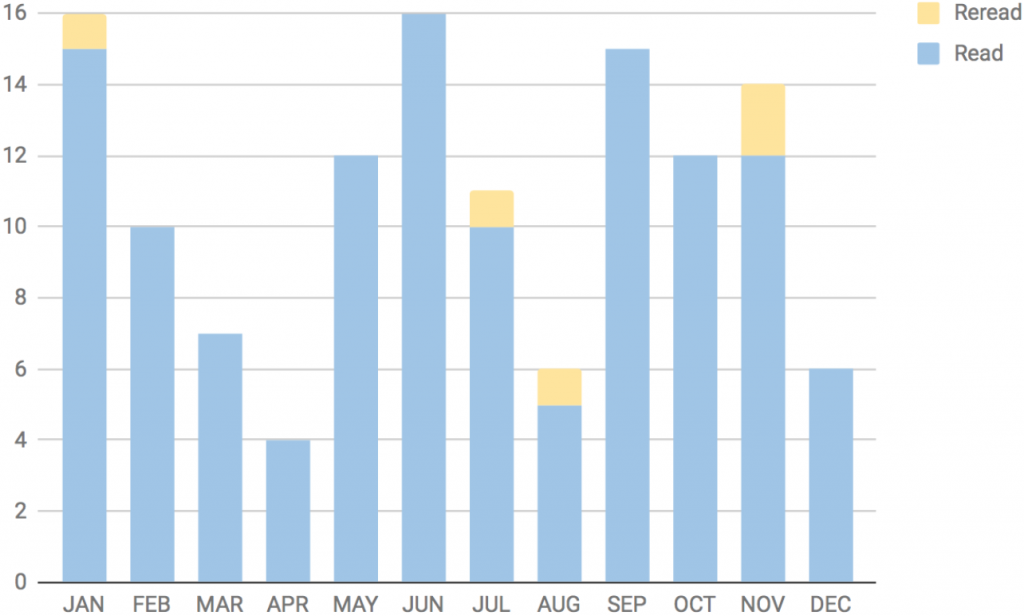 Rereading books rarely is on my agenda. That I even got to five was unexpected. Occasionally, I do like to revisit books I read when I was younger but on the whole, I’ve preferred to discover new books. I expect the same will be true in 2018, although I’ve come to appreciate the merits of rereading a little more.

Amount I Read and Listened Each Month 2017 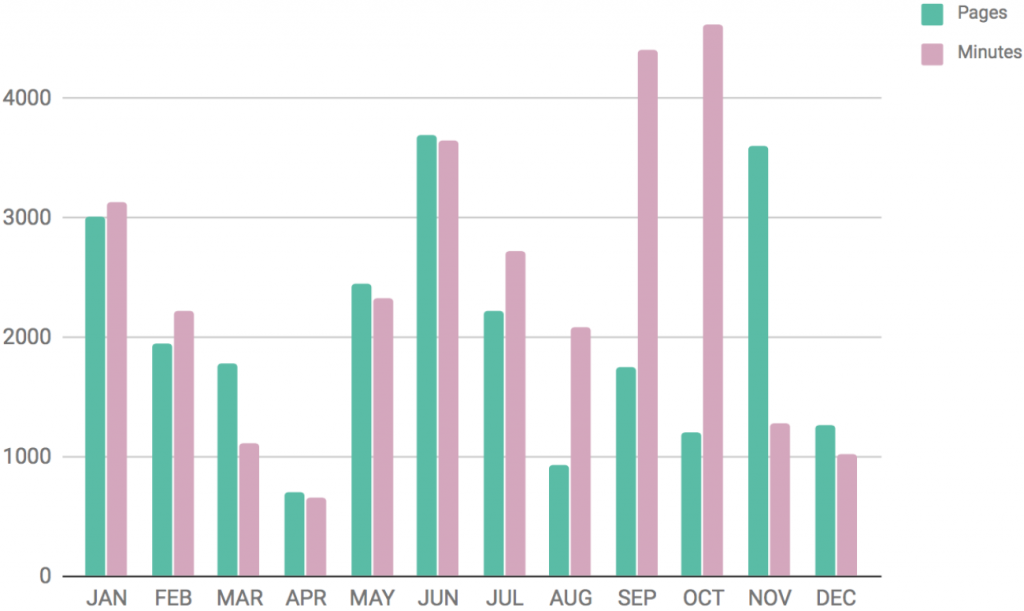 Considering the number of pages I read and the amount of audio I listened to, most months things were fairly equal. There’s no month during which I read less books but a whole lot more pages. I think that’s because half of the books I read had 300 to 500 pages. Only six books exceeded 500. Same with audiobooks — majority ranged from 7 to 15 hours.

September and October, though, were a little unusual. I got through 15 and 12 books respectively but that’s really all thanks to audiobooks. Seeing how busy I was during those months, I’m not surprised. I had to reach to audiobooks if I wanted get any reading done. That’s why I hardly listened to music during my free time, opting for audiobooks instead. 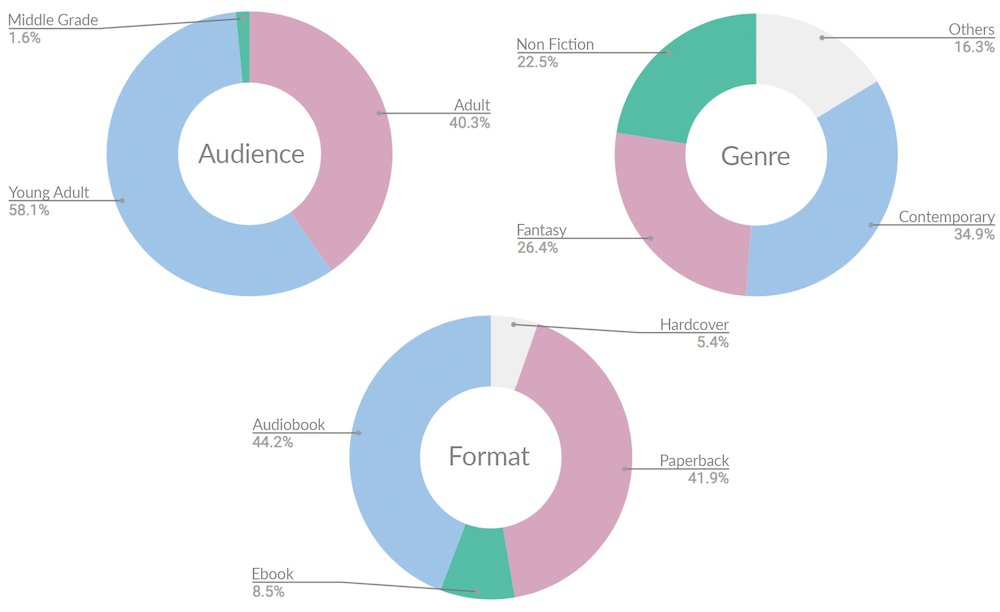 Speaking of audiobooks, they just about came out top among the formats of books I finished in 2017. Paperbacks followed very closely.

Paperbacks beat out hardcovers by so much for two reasons:

You’d think I’d have read more ebooks as a result. That didn’t happen because save for audiobooks, I tried to focus more on the books on my shelves.

Last year, adult books constituted 40% of the books I read. In part, that’s because I read a great deal more non-fiction. Although, I also reached for more novels targeted at adults. I think this trend will continue. While I don’t see myself giving up YA books in the foreseeable future, their proportion’ll probably go down.

For as long as I can remember, contemporary fiction has been my preferred genre. Since I started blogging in 2013, I’ve read across many more genres but contemporary still remains on top.

I’m actually surprised at the proportion of books that were fantasy. Somehow, I had the impression that for speculative fiction, it’d be more evenly split with science fiction. Looks like the SF in SFF isn’t all that significant to me after all.

Looking at my rating distribution chart (click on it above to enlarge), I’ve had a pretty good year. There were some disappointments but many got at least 3 stars out of 5 from me. In fact, my overall average was 3.593, which is decent. By the way, my ratings come with 3 figures after the decimal point because I always average out various criteria for my final ratings.

The only book that got a perfect 5.000 was The Hate U Give by Angie Thomas. Obviously, I highly recommend THUG.

The most disappointing book of the lot was The Chimes by Anna Small. I don’t like to abandon books, which is why I suffered through it. I mean, I rated it a grand 0.000, so let’s not go there. The only book I did not finish was Glass Sword by Victoria Aveyard. Nothing could redeem the boredom I felt with that one. 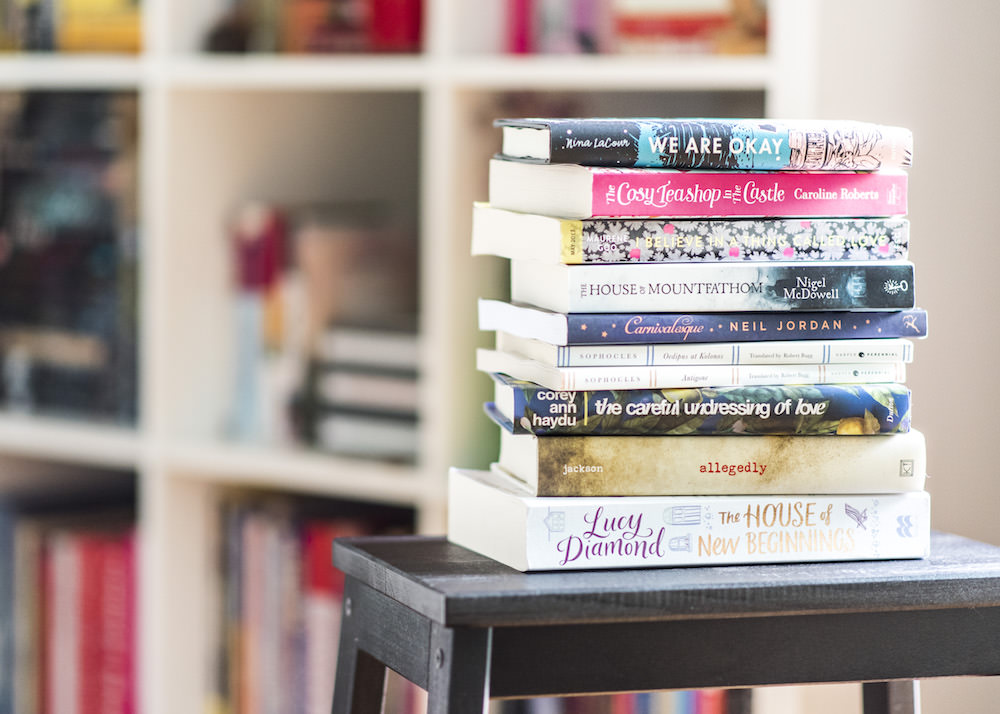 I hauled an estimated 130 books. I’m not sure how many exactly because I used Crini’s spreadsheet to track my book hauls. Every book you add is counted towards the TBR (to be read) pile, so I omitted recipe books, other reference books, and books that I had already read before. Altogether, I added 94 books to my TBR pile. Of those, I read 44 books.

All in all, 69 of the 127 titles I read were books that I owned. The rest I had borrowed. After unhauling a bunch more books, my TBR pile went up 11 books, so I ended the year with 400 books on my TBR pile.

People often ask me how I manage to read so many books. Personally, I don’t feel it’s all too much. If I were to cut down on mindlessly scrolling on my laptop and tapping around on my phone, I’d surely get more reading done. On the other hand, I should sleep more to reach the 8-hour nightly average.

In the end, it comes down to what we prioritise. I deleted game apps from my phone a couple of years back. I don’t watch many TV shows or movies either. Then again, I would probably watch more if Netflix had a wider selection for Singapore. So yeah, I just spend more of my downtime reading.

As for the towering TBR pile? I plan to buy only books I absolutely want to read and most likely will keep as well. Books I’m unsure of, I will borrow but my priority is my bookshelf. 400 is a massive number, which I want to reduce to the lower ends of 300+ by the end of 2018. This also means I will be very selective about the books I request and/or accept for review.

What are some observations you made about yourself, books and reading last year?