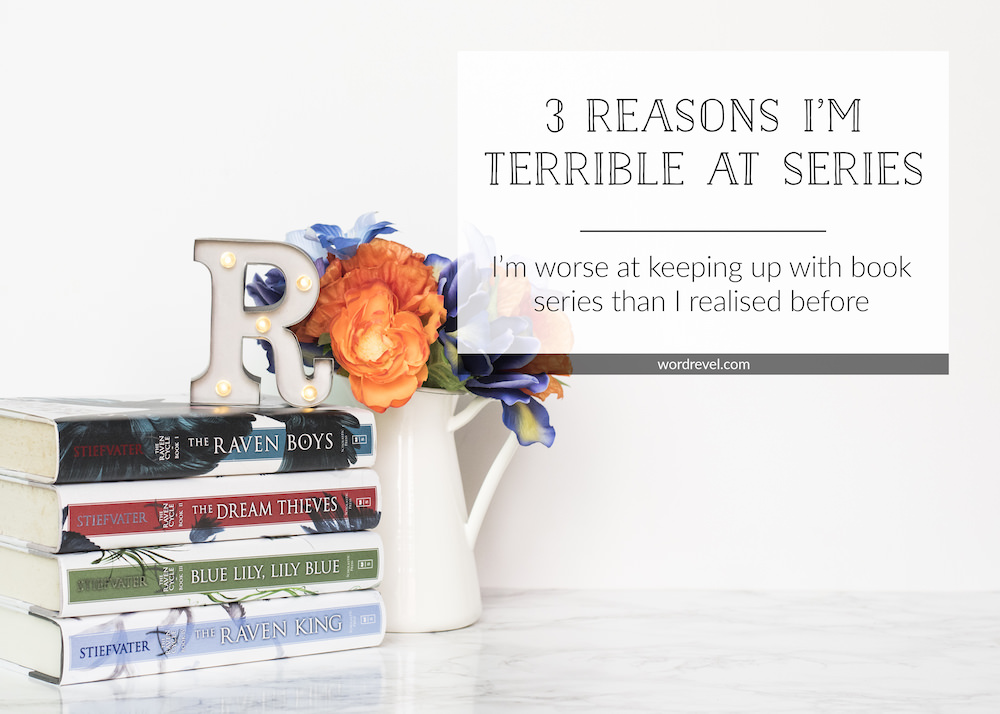 Series, Statistics, and I

Hi, I’m a bibliophile, and I’m terrible at keeping up with series. I confess that even though I like The Raven Cycle, I have yet to read The Raven King. Please don’t look at me like that! I got distracted… *mumbles*

Thanks to Crini’s book series spreadsheet, I knew that I’ve only finished five series that I own — that’s 4.9%. I abandoned double of those series. Despite these terrible statistics, I didn’t think too much of it. I used to read more library books per year than books I actually owned, so I pegged it to that. This year, I thought, would be different. I’m much more determined read my own shelf.

Recently, however, I found out just how much I really struggled with book series. I decided to pull together all series I’ve started over the past seven years, or so. I figured I’d have a much better tally if I factored in books I borrowed in the past. Oh, the naïvety! The statistics are, in fact, worse.

Well, I did finish 12 series. That’s not too bad. Now, how many did I decide not to ever finish? 38. Hahaha. Apparently, I’m in the midst of 46 series right now. If manage to finish them, then I’ll overtake the series I marked as DNF. But if I’m honest with myself, odds are against me.

Why Are Series Such a Struggle?

After realising just how perilous my relationship with book series is, I asked myself, why do I struggle so much with reading series? Here are thee reasons:

When it comes to series, time elapses before sequels are published. Often that means waiting one to two years before we can continue a story. Lots of things can happen in a year. Memories fade, so I forget details from the previous book. That can easily be remedied by rereading a book before reading the newly released sequel. Not everyone’s into rereading books, though. I don’t reread all that much.

Sometimes I forget I started a series, so the sequel passes me by. In the span of a year or two, reading tastes can change. When I was younger, I loved reading romance in YA books. Nowadays, I often prefer there to be less to no romance. While waiting for a sequel, I also tend to find other books that distract me or excite me more.

Series span more than one book, which means there are many more pages to read. It’s one thing to slog through a 320-page standalone that I’m not enjoying. Stakes are higher when it’s a trilogy because suddenly I have to work through 960 pages. I have a hard time casting aside books I’ve started reading. Over the past five-and-a-half years, I started 529 books. 520 I read to the end. I only marked nine books as DNF. Two of them I abandoned because I hated the audiobook narrators, so I might retry them as ebooks.

Series are different. When I finish a book, I consider if I either loved it, or was intrigued by a particular aspect. Should neither apply, I cast the series aside because I’m not willing to invest more time into something I know will feel like a waste of time. Yes, there are series I’ve continued, even though I rated the initial book 1 or 2 stars but there was something that made me hope for redemption of the series. Conversely, there are books I rated 4 stars, but then gave the sequels a pass because the series weren’t memorable enough for me.

Books that are introspective and relish the moment tend to make my heart sing. Some of my favourite books are those in which nothing seems to happen. They are, however, standalone books. For series, I expect things to happen. The story needs to be justified in its extended length.

I despise trilogies where protagonists are on the run for the entire second book. That means a third of the series is a black hole. I get that in books between the first and the last need to be bridges but if there’s nothing new to be gained, I’m out.

Do you struggle with series as much as I do? How do you deal with this struggle?