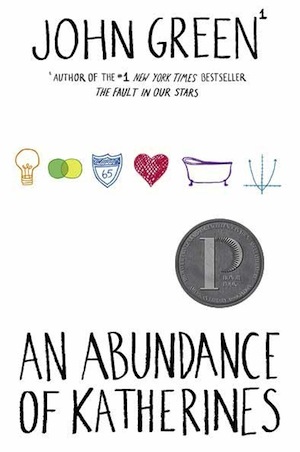 When it comes to relationships, Colin Singleton's type happens to be girls named Katherine. And when it comes to girls named Katherine, Colin is always getting dumped. Nineteen times, to be exact. He's also a washed-up child prodigy with ten thousand dollars in his pocket, a passion for anagrams, and an overweight, Judge Judy-obsessed best friend. Colin's on a mission to prove The Theorem of Underlying Katherine Predictability, which will predict the future of all relationships, transform him from a fading prodigy into a true genius, and finally win him the girl.

Things I detested more than anything after I was done reading An Abundance of Katherines:

Looking at that list, I disliked practically everything in that book. There were only a few things that I did appreciate. That Colin’s best friend, Hassan, is Muslim, so diversity is definite score. But even that didn’t win me over because Hassan is such a hypocrite. Sure, everyone makes mistakes. The problem with Hassan is that he professes that he is Muslim, acknowledges all his sins but couldn’t care less to atone for them or to lead a life befitting his faith. Plus he constantly refers to Colin as kafir, and jokingly keeps telling Colin that he should convert instead of trying to find his worth in yet another Katherine.

As much as The Fault in Our Stars has been on my radar, I think I’ll wait a few more months before picking it up, so I can have a go at it without a clouded mind.

The style of writing in An Abundance of Katherines did not amuse me in the least, yet for some reason others have referred to it as a humorous read. I didn’t even come close to smirking a single time. I was bored by the time I reached the fourth chapter. Had I read a printed copy of it, instead of on my Kindle, I might’ve torn the book to shreds in frustration. It was 3 a.m. after all when I finished reading and realized I didn’t gain anything out of reading this book. Even the entertainment value wasn’t there for me at all.

I can’t help myself but leave everyone with this quote:

“I figured something out,” he said aloud. “The future is unpredictable.”