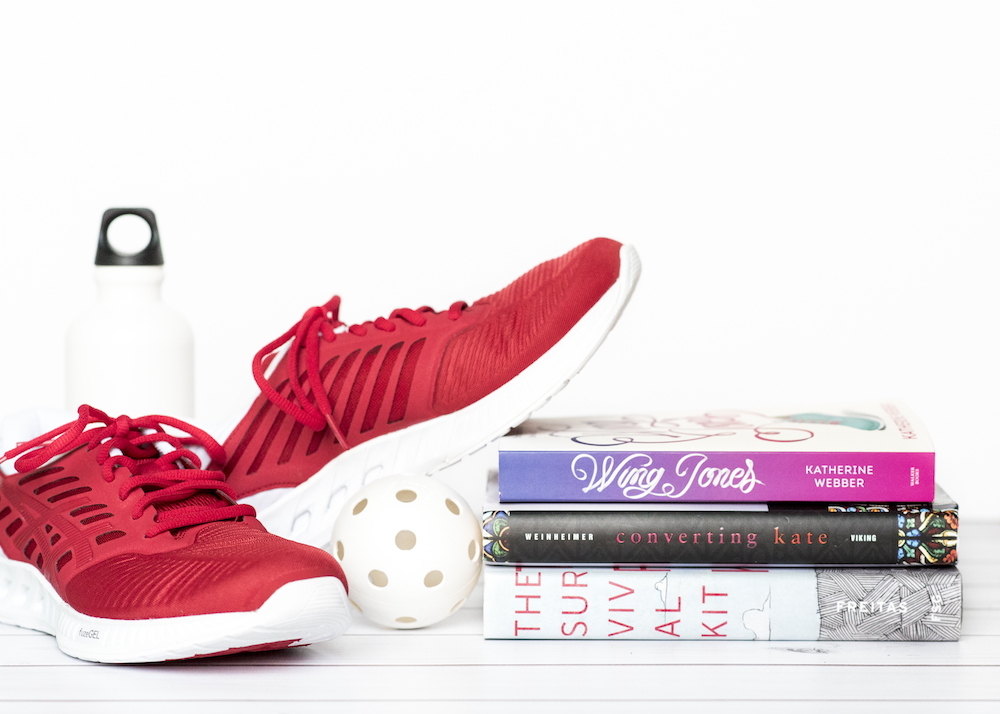 The point of the Love-A-Thon Mini-challenge #2 is to mash up non-bookish interests with our bookish lives. How we do that is up to us. Of course, I chose photography as my medium At first I wanted to feature book photography but that would’ve been too straightforward. Haha. So, I chose sports: what it means to me, plus my thoughts on sports in books.

Always Been into Sports

Both books and sports have been with me practically all my life. My parents used to read to my sister and me all the time when we were little. Then when I could read by myself, I carried on. Same with sports. My parents ran a gym when I was younger, so that’s where I spent a lot of my time after school. When I was done with my homework, I’d crash whatever classes I felt like that day.

In third grade I joined volleyball but my family moved the year after, so I ended up joining handball for a while. Then I changed schools, where I joined basketball. And then we moved again. At my new school only table tennis still had vacancies. I played and competed for six years before I changed to floorball in eleventh grade because I wanted to join a team sport. I’ve been playing it competitively ever since.

End of eleventh grade my teachers persuaded me to join the cross-country team, and so by default I was also registered to run for track. In university I picked up field hockey, which I continued to play for two seasons with a local club after graduating. Recently I’ve gotten into trying lacrosse for fun.

Sad State of Sports in Books

As you can see, sports has always been a huge deal for me. I’ve been on school and varsity teams for the most part, and joined clubs when I could. Reading about athletes in books therefore means a lot to me. Sadly, I’ve not found all too many that I’ve enjoyed. I came across one for the first time in sixth grade. Even though I borrowed it from the library, it remains erected in my mind — Break Point by Rosie Rushton. It was about a young tennis player whose coach encouraged her to work towards going pro.

It took years before I discovered more novels involving sports. Being Sloane by Lauren Morrill was a cute contemporary book focused on ice hockey and figure skating. I thought the plot wasn’t all too realistic but I took that in my stride just because of the sports camps that the characters were at. I know there’s the Hundred Oaks series by Miranda Kenneally but I found the first two that I read too heavy on the romance. For all the supposed focus on sports, the actual sports aspects were severely lacking.

Wing Jones by Katherine Webber is the most recent book involving sports that I read. It was marvellous! I loved reading about how Wing got into running and the effort that she put into bettering herself. There were also instances that made light of her thoughts and goals, which added more depth to her athleticism.

Another book I really liked was The Running Dream by Wendelin Van Draanen. This one’s about Jessica who was shattered that she couldn’t run anymore after losing a leg in a car accident. You guys, injuries are absolute nightmares for athletes, especially when there’s no telling how long it’ll take to recover, if at all! To read a book that dealt with that was amazing.

If you still haven’t had enough of runners, I also enjoyed Converting Kate. While the book’s major theme was about grappling with religion, I was so happy to learn she was a cross-country runner. You could tell that she enjoyed it as she went for runs even by herself.

My last book recommendation is The Survival Kit by Donna Freitas. In this case, rather than the main character, it’s the love interest who is on the ice hockey team. Instead of leaving it at that, Freitas chose to include detailed descriptions of what went down during matches. I almost felt like I was in attendance myself.

How do you feel about sports in books? Are there any others that you enjoyed?