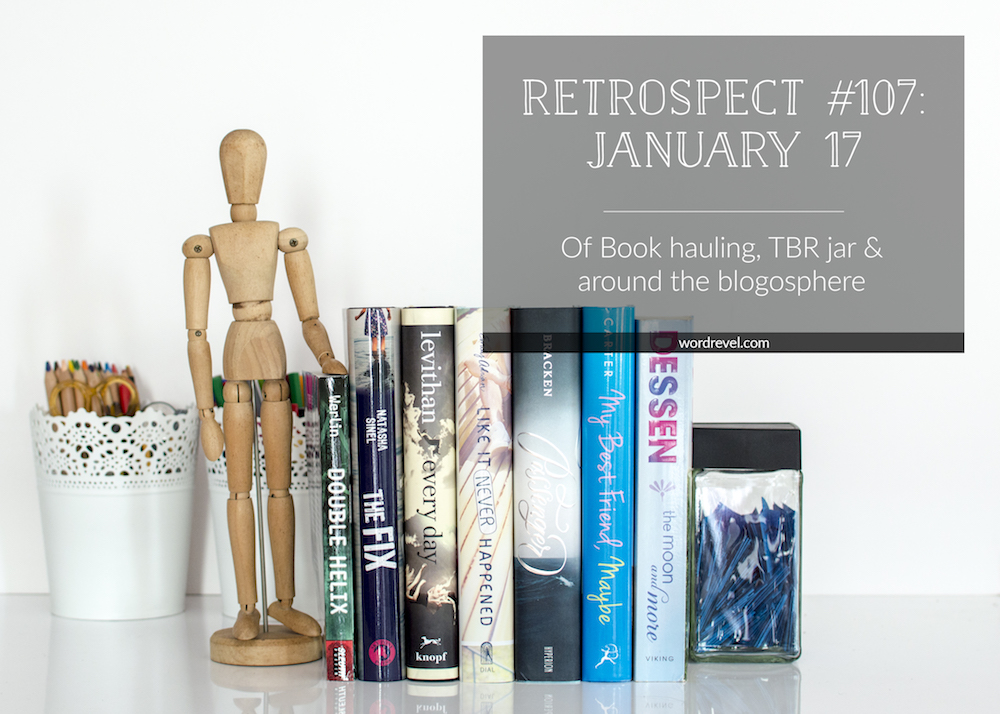 My camera’s wifi adapter broke this week, so that’s made me sad. I’ve become so dependent on it because it eliminates a lot of trial and error. It’s just so much quicker to accurately shift around items within my frame when I can simply glance at my iPhone screen. Now I have to keep moving to and fro between the frame and my camera’s screen or viewfinder to make sure my photos are composed the way I want them to be. I’m still deciding if I’m willing to fork over the money it costs to replace it.

I made a renewed attempt at a TBR (to be read) jar. You can see it in the photo above. Let me tell you, it was a feat stuffing all those folded sheets of paper into the jar. Jumbling them up is a futile exercise. Looks like I need to make a TBR box instead because I’ve only added the fiction titles I own. I still want to add the non-fiction titles and library ebooks I’ve bookmarked. They’re available 24/7, so totally made for TBR jars, unlike physical library books which would require me to actually make a trip to the library to borrow a title I pull from the jar. Not ideal TBR jar material.

Guest Post on Ethnicity at The Mile Long Bookshelf

What does this mean for me, not ever seeing myself reflected in books? That is the question I answered at The Mile Long Bookshelf. When Amber asked who would like to share about their personal experiences about mental illness, LGBTQ+, race, class, gender, etc, I knew I had to take her up on it. Being marginalised in literature is one thing. Being invisible means something else entirely. That is the reality for many who are of mixed ethnic descent.

My aim this year is to significantly reduce the TBR pile of books I already own. I tallied the books on my shelves, ebooks as well as (pre-orders) as of Dec 31, 2015. I arrived at a staggering 316. With that, this year I will only buy books I absolutely want to read on the spot, sequels to books I’ve already read or books that are an absolute steal. However, even when it comes to sales, I restrict myself to books already on my general TBR pile on Goodreads — no maybes for me.

That being sad, my orders of Double Helix by Nancy Werlin, Every Day by David Levithan and My Best Friend, Maybe by Caela Carter arrived for me to re-read. I also got The Fix by Natasha Sinel and Like it Never Happened by Emily Adrian because I want to read them soon, so I didn’t wait for paperbacks. Of course, I pre-ordered Passenger by Alexandra Bracken! It’s one of my most anticipated 2016-reads, so there was no way I was going to pass up on it. Lastly, I picked up The Moon and More by Sarah Dessen at a book sale that I randomly passed by. This was the only available copy, so I had to grab it very quickly and at 70% off, well, it was a really good deal!

You may have noticed the transition I’m making with the images I post on the blog. I’m adding text to the image headers, so these will be more shareable on social media. That’s something I wanna get better at this year, so I hope this experiment of mine will pay off. Plus, this does add a little more cohesion to the overall feel of my blog and I like that. This does mean though that I’ll be reformatting all my previous posts. I expect to take one to two months till I’m done.

This week I announced Bookstagram 101. I’ll be posting tutorials over the coming weeks to help newcomers to the bookish Instagram scene. At the same time, I hope to answer questions and address uncertainties that bookstagrammers might have. For example, how to deal with copyright, achieving consistency, etc. This series of posts will be separate from my photography tutorials which focus on the more technical aspects of photography.

I also reflected on re-reading books I loved before and am loving the thoughtful comments that others have been leaving behind. I’m also surprised that so many of them actually aren’t that much into re-reading books. This week’s Bookish Scene: Project 52 theme is Wanderlust. I had a lot of fun with this one because I love exploring new places, be it in real life or through books.

As usual, Hot off the Press went live, featuring the YA books that were released this week.

For drama geeks, you might wanna check out Cut the Lights by Karen Krossing. It definitely brought back memories of my own theatre days.

Who else has had trouble stuffing everything into a TBR jar? Raise your hands!