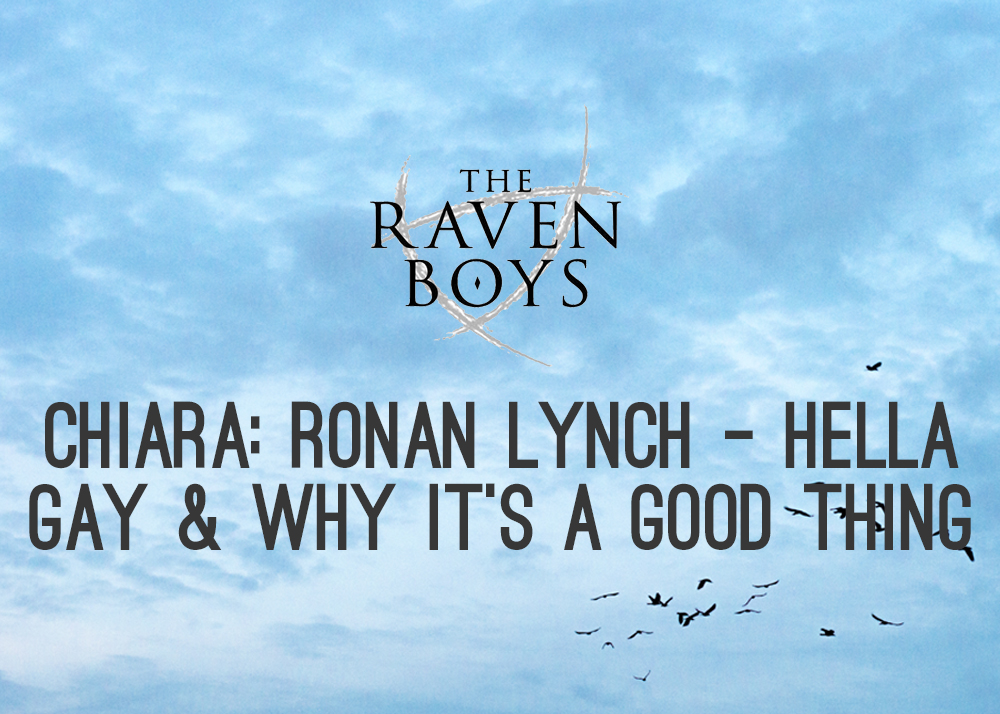 Where would books be without the fandom? For the uninitiated, Pynch is the backbone of The Raven Cycle fandom. Of course I had to invite Chiara from Books for a Delicate Eternity to talk about it. After all, she is pursuing her postgraduate studies to become an LGBTQ+ youth worker. She also writes LGBTQ+ fiction, of which you can find out more at her author website.

Amidst her pursuits of writing and becoming a youth worker, Chiara traverses Twitter on a daily basis and maintains a Goodreads shelf dedicated to LGBTQIA.

Hello, everybody! *inserts invisible Grover GIF* I’m Chiara from Books for a Delicate Eternity and today I’m INFILTRATING and DOMINATING the lovely Joséphine’s blog to talk about how Ronan Lynch from The Raven Cycle is hella gay, and why this is a good thing.

Ronan Lynch: Irish, bad boy, apathetic, swears like a sailor, would do anything for the people he loves (one of which is ADAM FREAKING PARRISH), and (amongst other things like tattooed and a dream thief and so on) gay.

Ronan Lynch is gay, and this is a very, very, very, very to the nth degree a good thing. Why? Well, read on my friend, because I am going to tell you why right now.

1. Anti-stereotype of the gay characters we often see in Young Adult literature

2. Gayness is not the defining feature of his character

Heck, unless your gaydar is on point, or someone has told you about the beauty that is Ronan Lynch and Adam Parrish (aka PYNCH), you’d be hard pressed to find anything about Ronan that would lead you to think he’s gay. Well, except his second secret, but hey that’s two books into the series.

3. Filtered into the story

Kind of a lead-in from number two, but as a reader, you don’t know Ronan is gay until he, as a character (and thanks to Maggie as a writer), deems it important enough for you to know. It’s filtered into the story so artfully and beautifully that by the time you do find out that Ronan is hella gay it’s like there is no chance he could have been anything BUT gay.

It’s the most precious thing in the entire world. Because there’s no flirting. There’s no swooning. There’s not even an admission of any kind on Ronan’s behalf (as of yet). That’s not to say that you as a reader will not swoon and fall head over heels with the beauty that is Pynch. In all reality, it will likely proceed to consume your life.

You’ll find yourself making playlists of songs that Maggie has tagged with only Ronan and Adam, you’ll write fanfic, and you’ll think about them practically every day. And trust me, that’s not just me I’m talking about. Pynch is introduced with the subtlety of a burglar in the night, and before you know it they’re your new OTP (one true pairing for those unenlightened).

5. He’s gay, and he’s not a side character in a worldwide bestselling series

Oh, yes. Cries of “But Alec and Magnus!” will probably be coming at me, but no. Did Alec did get a book entirely dedicated to him? Did Magnus? No, they did not. They got sections within books about heterosexual cisgendered white girl Clary Fray. Ronan Lynch is hella gay, and he’s a main character in an incredibly popular YA series that is read by almost every blogger I know. Hells. YEAH.

6. His relationship with Adam Parrish is not queer baiting

I’ve seen, in my travels of the world wide web, readers attacking our Queen Maggie about the fact that, three books into The Raven Cycle, we have no affirmation that Adam is attracted to Ronan (which of course is false because are these people not READING THE SAME BOOKS I AM?). Adam Parrish has (presumably) only been attracted to females thus far in his short life. At least, we as readers have only seen him attracted to one person, and that person is Blue (the one female protagonist in The Raven Cycle).

Adam struggles a lot with wanting to fit the mould of what he thinks society wants him to be. Rich, popular, independent, and of course: heterosexual. Over the course of these books we’ve seen him struggle with this on many occasions, especially regarding money. So if he’s THAT influenced by these ideas of “normality” that he has in his head, he’s probably not even going to admit to himself that he is attracted to Ronan, let alone admit it to the object of his attraction (i.e. Ronan).

The revolutions and evolutions that Adam goes through in the course of these books is one of the most wonderful aspects about it, and we, as readers, are not waiting for Maggie to drop the answer that YES, ADAM PARRISH IS QUEER, but rather for Adam to come to the realisation that yes, he is queer. (Of course I say this in the hopes that he does, and that he and Ronan live happily ever after in the cutest relationship in fictional history.)

So there you have it. Ronan Lynch is hella gay, and this is a really good thing. For breaking the stereotype, for representation, for not being pushed to the sidelines, and for bringing Pynch into this world. Keep on, Ronan Lynch. I salute you.