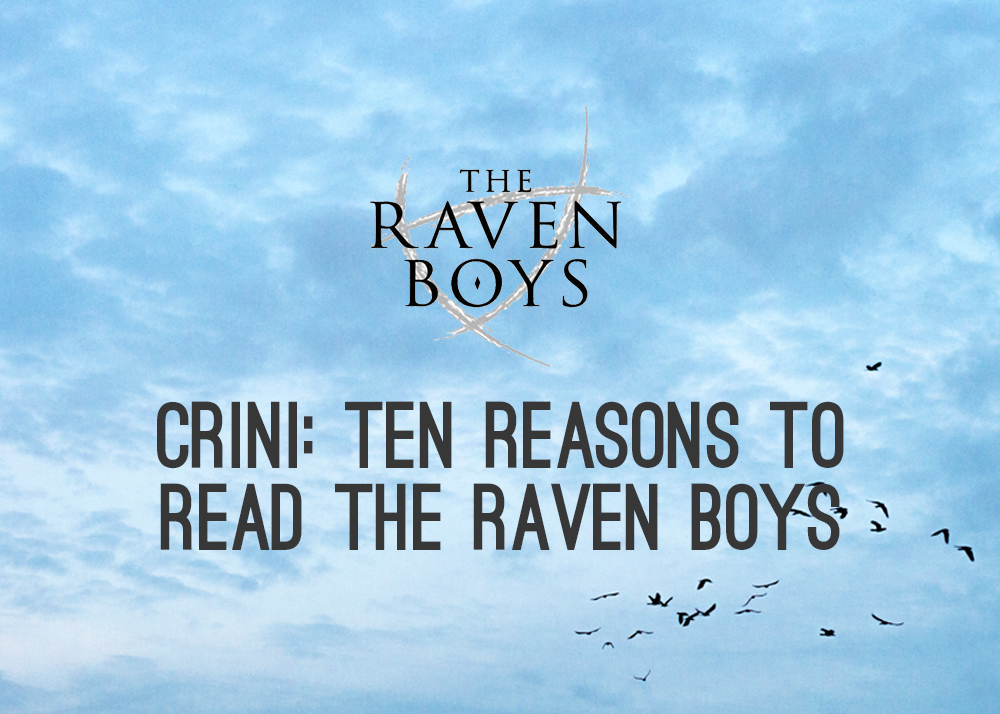 If there’s anyone who can convince you to read The Raven Cycle, it’s Crini from All the Books. If you follow her on Twitter, you’ll be familiar with #lynchdam. If not, you should, so she can supply your daily dose of Raven Boys. If that’s not enough, she’s also on Tumblr, where she’s all about Pynch.

Crini also has an amazing artistic talent as you can see on Instagram as well as her Etsy store, SkinnyHues, where she sells her colourful bookmarks.

This is what real life is like! There might be a lot of supernatural stuff going on but that’s really not the important part of this series. It’s more of a means to an end. The more important aspect are all those real life problems people everywhere have to deal with every day. All kinds of everyday challenges, both of the rather insignificant and the drastic kind, nothing overly dramatic though, that is just there for the shock effect, but real life situations.

2. Characters you will love as if they were your best friends

These characters are flawless in their creation but have so many flaws and you will love them for it. They can be hardheaded, stubborn, proud, cruel, prejudiced but that makes them real. What makes you love them is that they are also protective, trustworthy, selfless and loyal. These characters are so much more than just an idea of a person on paper.

3. It’ll break your heart but the characters’ sass will do its best to fix it

This series is equal parts heartbreak and fun. (That’s actually a lie. It’s more like 99 parts heartbreak and 1 part fun) If you let yourself get sucked into the lives of the characters and start caring about them you’re in for a roller coaster ride of emotions. Most of the time, you’ll feel like bawling your eyes out about the unfairness of life but the characters also come with a lot of sass and can be downright hilarious if they want to be.

4. Relationships to die for

When it comes down to it, The Raven Cycle is a series about friendship. The summary of the first book might want to tell you otherwise but that’s what it is. The complexity of the friendship between these characters is stunning and its development nothing but marvelous.

It’s not only this friendship that is oh so enviable and just perfect but other relationships are just as complex and realistic as well. Romantic relationships are as far away from insta love as it can get and include actual dating and parent-child relationships come in all its different variations, showing you what differences these kind of relationships can make.

In a lot of different ways, Maggie shows you what it can mean to be loved. There are quite a few characters who are the same but aren’t. When it comes down to it, the important difference between them is if they are loved or not. Seeing these kind of characters being thrown into the same situations is such a captivating thing. It’s interesting to get to know how they deal differently because of that.

6. It will make you feel stupid and you’ll love it for that

The Raven Cycle is a series that rewards you for rereading it. It’s cunning in a way that will mess with your head and heart. There are references everywhere, hints about what’s to come, hidden clues between the lines and ambiguities. All of them oh so subtle that it’s really hard to see them when you read the series for the first time. You might even miss them during a second read. When you do spot them though, it will make you feel stupid because they are actually totally obvious. It’s just Maggie’s ingenious way of hiding them in plain sight.

When people start discussing if a character is actually gay/lesbian/… it’s usually a good sign that the author did something right. They didn’t set their characters onto a stage and let them announce it to the whole world because that’s not just how it works. There has been a lot of discussion and confusion surrounding at least one of the characters of this series regarding this, which only shows you what a good job Maggie did.

8. A great mix of mythology, folklore and history

Have you ever read a book about Welsh kings before? The Raven Cycle has such a fresh and barely seen before background story in store and spins an epic adventure around a Welsh king, psychics, mystical places and other themes that will remind you of Gothic fiction.

The different books all come with different themes and Maggie’s take on these is like nothing you’ve ever read before. There is a lot more to secrets, dreams and mirrors than you think and this series opens up some new amazing perspectives on these.

On the one hand, The Raven Cycle is set in today’s modern Henrietta, Virginia but on the other it makes you feel like you’re reading one of those eery classics. This is only enhanced by the theme of the series, that time is circular. That leads to an atmosphere that perfectly fits this mystical adventure.

Do these reasons convince you to read the Raven Boys? If you’ve already read it, which other reasons can you think of?