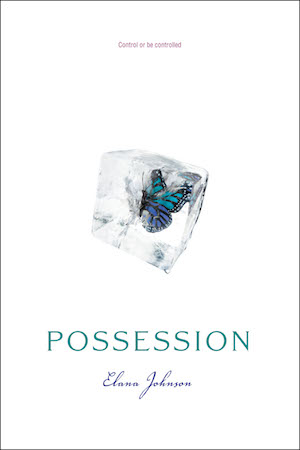 Vi knows the Rule: Girls don’t walk with boys, and they never even think about kissing them. But no one makes Vi want to break the Rules more than Zenn…and since the Thinkers have chosen him as Vi’s future match, how much trouble can one kiss cause? The Thinkers may have brainwashed the rest of the population, but Vi is determined to think for herself.

But the Thinkers are unusually persuasive, and they’re set on convincing Vi to become one of them…starting by brainwashing Zenn. Vi can’t leave Zenn in the Thinkers’ hands, but she’s wary of joining the rebellion, especially since that means teaming up with Jag. Jag is egotistical, charismatic, and dangerous–everything Zenn’s not. Vi can’t quite trust Jag and can’t quite resist him, but she also can’t give up on Zenn.

This is a game of control or be controlled. And Vi has no choice but to play.

I still am surprised that I made it past the first 100 pages and went on to complete Possession. The writing was mechanical and some parts made next to no sense. Sure, Vi’s world is not a world that we know, so things naturally are different. No matter how different and imaginative her world is though, it is possible to weave in explanations into the story without stilting the writing. Sadly, I was confused and and hated the stilted writing style.

What bothered me was the complete lack of clarity. The narrative was from Vi’s point of view, yet there were times it seemed to shift to Jag’s. There was no warning, no indication, no nothing. There was no header, change in font or in the very least a lead-in. It was only a couple of pages later that it turned out that Vi had invaded Jag’s dreams. Prior to that there was no indication that she even had that capability. It greatly annoyed me that the narration continued in first-person as though his thoughts were actually her thoughts. Perhaps that was supposed to be a literary device to show just how much her thoughts were consumed by his. I didn’t care for it. Yes, I appreciate it when authors believe in the readers’ intelligence but I highly doubt anyone would have been insulted if his dreams had been italicised in Possession

Then there was this whole Jag said this but in Jag talk it meant that. Once is fine. Twice is bearable. Thrice is too much. Repetition should be reserved for something significant. Who cares that Vi is so great at reading Jag and feels such a deep connection with him. There are more meaningful ways to show that. I did like Jag. Jag was interesting. I wanted to know what was hiding behind his smirks. But the portrayal of him didn’t do him all that much justice.

I Don’t Care for the Sequel

At first I wanted to hurl Possession into one corner, give it a single star rating, and then forget about it. But I managed to reach the 180th page with THE twist of the story and that made me finish reading the book just to know what would happen. I figured making me want to read more warrants a second star. But the ending made me wanna go into another fit of rage but this is the first book of a trilogy, so I suppose the not so desirable ending was necessary to give reason for the subsequent two books. I doubt I’ll stick around to find out what happens after this though.