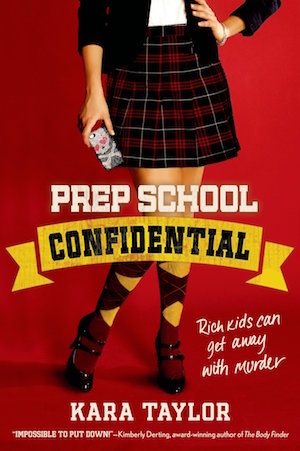 In this breathtaking debut that reads like Gossip Girl crossed with Twin Peaks, a Queen Bee at a blue-blooded New England prep school stumbles into a murder mystery.

Anne Dowling practically runs her exclusive academy on New York’s Upper East Side—that is, until she accidentally burns part of it down and gets sent to a prestigious boarding school outside of Boston. Determined to make it back to New York, Anne couldn't care less about making friends at the preppy Wheatley School. That is, until her roommate Isabella’s body is found in the woods behind the school.

When everyone else is oddly silent, Anne becomes determined to uncover the truth no matter how many rules she has to break to do it. With the help of Isabella’s twin brother Anthony, and a cute classmate named Brent, Anne discovers that Isabella wasn’t quite the innocent nerdy girl she pretended to be. But someone will do anything to stop Anne’s snooping in this fast-paced, unputdownable read—even if it means framing her for Isabella’s murder.

My Return to Mysteries

Prep School Confidential, I figured, would satisfy that nostalgic need for fluffy teen murder mysteries, after which I would just chuck it aside and move on. That is not the case. I am not moving on. I picked up the second book and plan to read it this month. All the clichés I remember from the murder mysteries I used to read can be found in Prep School Confidential but they were so much more than that. Taylor took all the good elements of a whodunnit novel and added layers of depth and developed the characters throughout the book, and so expanded on what I’ve come to expect from murder mysteries.

I’m Hooked to the Series

I was totally sucked into the book, although I was afraid at first that this book would be simply a cross between Gossip Girl and mystery or something; maybe thanks to the Upper East Side setting. The first couple of chapters featured spoilt rich kids, and I was all ready to bet against myself that I wouldn’t even finish the book. Turns out I not only finished reading the book, I finished liking it very much.

The characters were diverse, the protagonist’s voice was relatable, there were plot twists and yet it still managed to be the light book I was hoping for when I started reading. I wanted a quick read and I got it. Albeit not because it was fluffy but rather because I couldn’t put the book down and kept flipping the pages to see what would happen next.