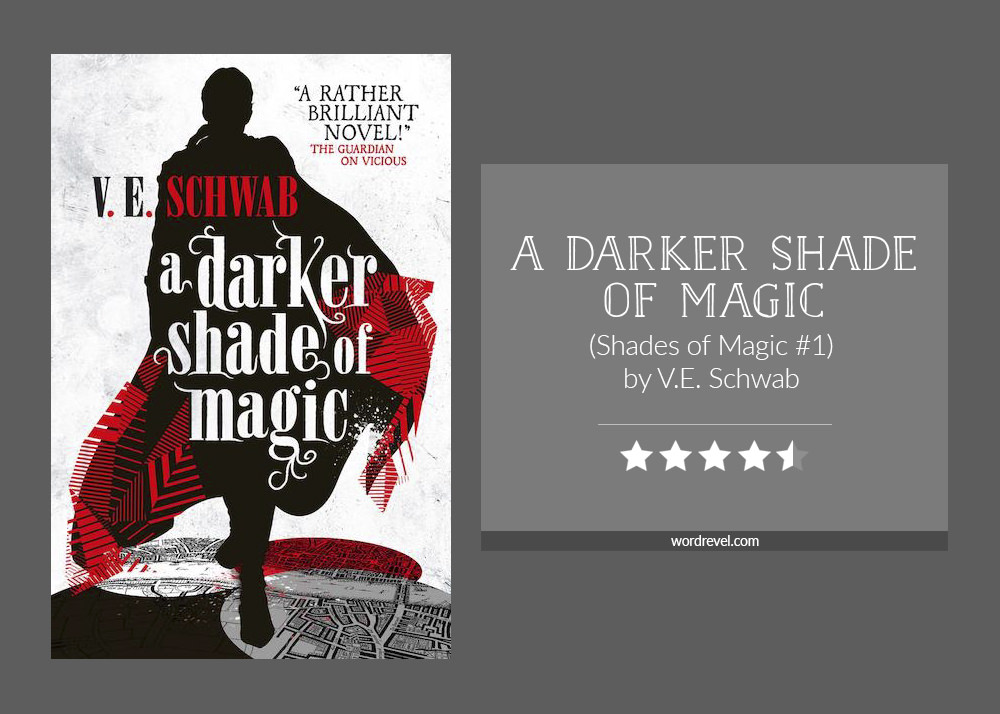 Kell is one of the last Travelers—magicians with a rare, coveted ability to travel between parallel universes—as such, he can choose where he lands.

There’s Grey London, dirty and boring, without any magic, ruled by a mad King George. Then there’s Red London, where life and magic are revered, and the Maresh Dynasty presides over a flourishing empire. White London, ruled by whoever has murdered their way to the throne—a place where people fight to control magic, and the magic fights back, draining the city to its very bones. And once upon a time, there was Black London…but no one speaks of that now.

Officially, Kell is the Red Traveler, personal ambassador and adopted Prince of Red London, carrying the monthly correspondences between the royals of each London.

Unofficially, Kell is a smuggler, servicing people willing to pay for even the smallest glimpses of a world they’ll never see—a dangerous hobby, and one that has set him up for accidental treason. Fleeing into Grey London, Kell runs afoul of Delilah Bard, a cut-purse with lofty aspirations, first robs him, then saves him from a dangerous enemy, and then forces him to spirit her to another world for a proper adventure.

But perilous magic is afoot, and treachery lurks at every turn. To save all of the worlds, Kell and Lila will first need to stay alive—and that is proving trickier than they hoped.

Before I read A Darker Shade of Magic, I was certain that I would enjoy it. I was also sure I wouldn’t be able to wait two years for the conclusion of the trilogy. So, I did what I tend to do — pre-order the first and second books, then park them on my bookshelf. With the release of A Conjuring of Light this year, it was finally time for me to read A Darker Shade of Magic. The anticipation was well worth it! V.E. Schwab wowed me once again.

The amount of wit Schwab is able to weave into the most dire of situations is remarkable. When she writes characters, it’s hard to believe they aren’t real. Even though the worlds she creates are clearly imaginings of fantasy, the suspension of disbelief comes naturally. A Darker Shade of Magic was no exception.

At first, things started off very slowly. This allowed me to ease myself into A Darker Shade of Magic, and get to know the parallel Londons, and how the magic system worked. The focus on world building during the initial chapters showed how the Londons differed and how they were connected. Even though this was important, it did make the pacing feel a little off-kilter to me. When the conflicts arose, I was completely taken in but they set in a little later than I would’ve liked. That’s why my mind kept wandering during the first third of the book.

Once the setting and the characters were established, however, A Darker Shade of Magic was a stellar read! I love my characters with a dash of snark, plots with some dark twists and worlds that are magical, yet seem familiar. Despite the “traditional” fantasy elements involving royalty and magic, good vs. evil, deceit, and so forth, A Darker Shade of Magic was wholly original. Coupled with Schwab’s talent for creating monsters, it was a wonderful start to the trilogy.