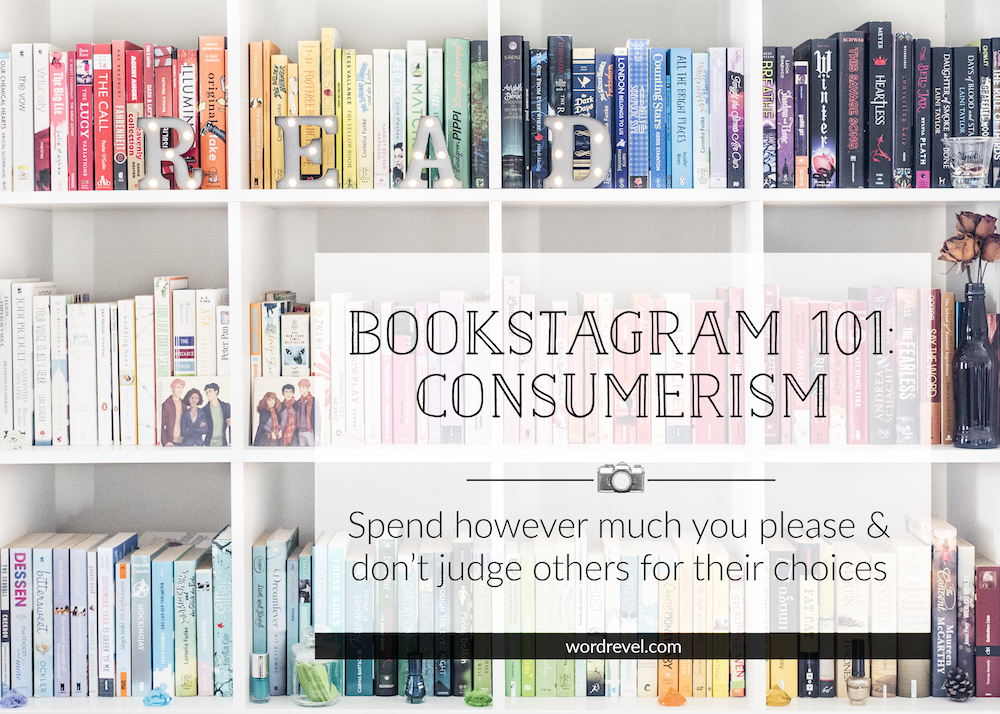 One aspect of bookstagram that cannot be ignored and that is rarely talked about is consumerism. For better or for worse, bookstagram promotes consumerist attitudes. I think this is something we need to acknowledge, and perhaps be wary of but not malign.

How a person chooses to spend their money is up to them. Those who aren’t interested in spending beyond books or those who can’t afford to shouldn’t be forced to the periphery of the community. At the same time, those who purchase and/or feature consumer products shouldn’t be given flak for it.

What we need to remember is that the focus of bookstagram is books. Books are a shared passion among bookstagrammers, and it is up to the individual to decide how they want to support that through their own Instagram accounts. What they post is up to them. If their content doesn’t agree with you but it’s not in any way insulting, suck it up or unfollow.

Beyond books, aesthetics are important to many bookstagrammers. This can be seen in elaborately staged photo ops. Even those who choose to share more of their day-to-day lives involving books still curate their Instagram feeds. This includes picking which books they do or don’t want to feature.

It’s not uncommon for bookstagrammers to admit that they choose editions of books to acquire based on the cover design. Some do this in a bid to elevate the style of their photos. As a result, physical books dominate the bookstagram sphere, often to the exclusion of library books. Ebooks and audiobooks hardly feature either, though their presence is steadily increasing.

Despite the widespread adoption of hardcovers, don’t let that be a barrier to joining bookstagram. Neither look down on someone who prefers well-thumbed paperbacks. Sure, it’s harder to produce clean photography but with practice, it can be done.

Whichever formats you choose, don’t feel coerced to buy something you don’t want to or can’t afford. Drill that into your head! Before buying a book, ask yourself, would you, independently of bookstagram, still buy this book? Would you buy this specific edition, even though it’s more expensive? If the answer is yes, great! If the answer is no, do you have a dedicated budget for bookstagram? If yes, calculate if it fits. If no, don’t buy the book.

Besides books, props also are integral to the style of many on bookstagram. Flowers, accessories, candles, watches, pouches, pillow cases, and so on have found their homes alongside books. Props raise the appeal of their photos. They can complement the books and add variety to the posts that appear in our feeds.

Furthermore, it’s natural that anyone would want to share the bookish products they’ve acquired. They’re excited. They want to share with their friends and followers who might be interested in these items too. If you couldn’t care less, why not simply appreciate their posts and photos for what they are? After all, it takes time, vision and effort to put these together.

Of course, not everyone is into the prolific Funko Pops that the bookstagram community has readily embraced. Personally, I’m not a fan. Sure, there are some that I kind of like but not enough to spend money on. I rather reserve mine for books. That’s my prerogative.

In fact, I don’t own a lot of props. I post relatively minimalistic photos. Nonetheless, I’ve found my place in the community. You can too. Don’t let the pressure to “fit in” weigh you down. If you’re not into something that everyone else seems to be, it really is no big deal. There’re enough Funko Pops to go around on bookstagram. Nobody expects me to add more. How much I engage in consumerism is up to me.

Then there are the privileged ones who are selected as reps or approached for brand collaborations. Don’t rain on their parade, commenting or subtweeting that they’re only in for the freebies. For the vast majority, that’s not the main driver of being a bookstagrammer.

Yes, not all can afford to purchase the items they promote but they are paying with their time. That time for some of the bigger bookstagrammers goes far back. Believe it or not, some have been around for three to four years! That’s a huge commitment.

Unlike fashion and tech influencers, bookstagrammers mostly don’t receive monetary reimbursements. And if they did, it would surely be for the better. Paying for services often increases the quality of content.

Now, I know many of us don’t appreciate being sold to 24/7. If you feel that any particular account is guilty of that, and you don’t like it, jump ship. If you prefer the “good ol’ days” where it was “less competitive” and only about sharing and talking about books, look for like-minded people. Nobody’s forcing you to follow anyone whose content you don’t like.

On the flip side, bookstagram is a treasure trove of beautiful products that accentuate the love for books. You can find amazing designs tailored to your favourites. Following brand accounts and sponsored bookstagrammers helps in discovering them.

What are your thoughts on consumerism and bookstagram? Sound out in the comments below!