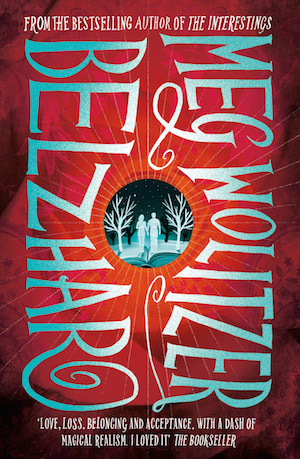 A group of emotionally fragile, highly intelligent teenagers gather at a therapeutic boarding school where they are mysteriously picked for 'Special Topics in English'. Here, they are tasked with studying Sylvia Plath's The Bell Jar and keeping a journal. Each time the teens write in their diaries they are transported to a miraculous other world called Belzhar, a world where they are no longer haunted by their trauma and grief – and each begins to tell their own story.

One of the books I most looked forward to in 2014 was Belzhar. When I first saw the US cover, I was taken in and when I read the short description, I was sold. I wanted to read the book. It didn’t matter to me that I had never read a word of Sylvia Plath because I had every intention to. (For the record, I read The Bell Jar before Belzhar in order to preempt spoilers. Hah.) The hook for me was the exploration of mental stability.

Later in the year I won Chiara’s review copy in a giveaway she hosted on her Facebook page. That’s how I got hold of the Australian/UK edition instead of the US one. I don’t like it as much but I think it does conveys the aspects magical realism better. Somehow that had completely passed me by before reading. See, I expected a full-on contemporary fiction book. That’s not what Belzhar is.

Magical realism needs to intrigue me. I want to believe in hope and fate and a dash of magic in the ordinary world when I read magical realism. Belzhar fell completely flat to me in that aspect. Usually I enjoy magical realism, so technically this should have been a pleasant discovery in Belzhar for me. Sadly, it wasn’t.

The magic supposedly lay in the journals that the students kept. As they wrote in those journals, they were transported to a reality that temporarily suppressed their traumatic experiences. There they could find reprieve from the grief that had engulfed them — the reasons they ended up at this therapeutic boarding school.

These discoveries however didn’t feel magical to me at all. Mostly that was due to the expository writing style. The experiences and emotions were hardly presented to the reader. As a result, these alternative realities sounded very unimaginative.

Mental illness is not something that can be concretely measured. It exists on a spectrum. It is intangible. But it is there. An effective way of conveying that in a book is the characters’ emotions. How they feel, think and respond to their surroundings gives readers much more insight than the mere statements of counselling and attending a special boarding school.

These emotions that would’ve lent credence to the characters’ plights were mostly lacking. Their stories were blandly recounted, which didn’t allow me to experience anything as a reader. I know the facts about these characters in Belzhar but that it is. That made some revelations extremely frustrating for me.

In the end, not only did I hate one of the main resolutions because I felt cheated by it but I also couldn’t grasp it. I didn’t come to understand why things happened the way they did and it made me feel even more indifferent about some of the characters.

While the writing style might not have been impressive and didn’t convey emotions all that well, it was to the point. No words were wasted. If you’re not into flowery writing, then Belzhar might be for you since it is the anti-thesis to that. Also, props to believable diversity among the characters.

On a personal level, I think Belzhar also got away with 2 stars because I had very recently read We Were Liars, which I disliked even more, oddly for similar reasons. Both books cheated the reader in me.