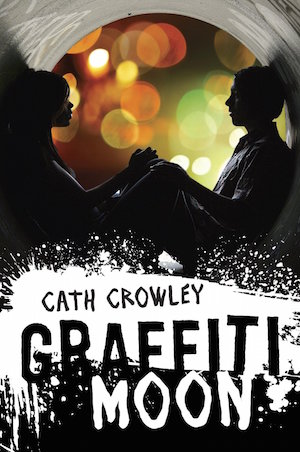 Senior year is over, and Lucy has the perfect way to celebrate: tonight, she's going to find Shadow, the mysterious graffiti artist whose work appears all over the city. He's out there somewhere — spraying color, spraying birds and blue sky on the night — and Lucy knows a guy who paints like Shadow is someone she could fall for. Really fall for. Instead, Lucy's stuck at a party with Ed, the guy she's managed to avoid since the most awkward date of her life. But when Ed tells her he knows where to find Shadow, they're suddenly on an all-night search around the city. And what Lucy can't see is the one thing that's right before her eyes.

One of Few YA Books About Graffiti

My favourite undergrad project was graffiti. I spent an entire semester studying the subculture of graffiti, which was a more than colourful endeavour. What I noticed then was the lack of representation of graffiti in YA literature. Perhaps it’s the deviant nature of it that precludes it from being written about so freely? Or maybe it’s also the difficulty of access, which could be limiting authors’ understanding of graffiti.

Whatever the reasons for this deficiency, I’m glad Hazel pushed me to read the final graffiti-related book that I had bought during my semester of pursuing subcultural theory. In a way, I held off reading it because I didn’t like the thought that there might not be a next book involving graffiti for me.

I was swept away by the lyricism of the book, which was set against the grittiness of staying underground and remaining anonymous. I knew that Cath Crowley was capable of such lyric prose because I read another book of hers, A Little Wanting Song, which I loved precisely for the same reason. I just didn’t expect her to inject that same style because A Little Wanting Song was so different and revolved around music.

Yet Graffiti Moon was interspersed with poems. These poems were also wonderful because they added even more layers to the book than it already had. While the chapters alternated between Lucy and Ed, the poems added a third point-of-view (that of Ed’s best friend).

Books that take place in a span of less than 24 hours appeal a lot to me because it feels almost like reading in real time. Graffiti Moon took place in the course of a single night. As a reader, it gave me the sense of watching the events unfold right before as I read. I could savour every moment because the story took place in such a short span of time.