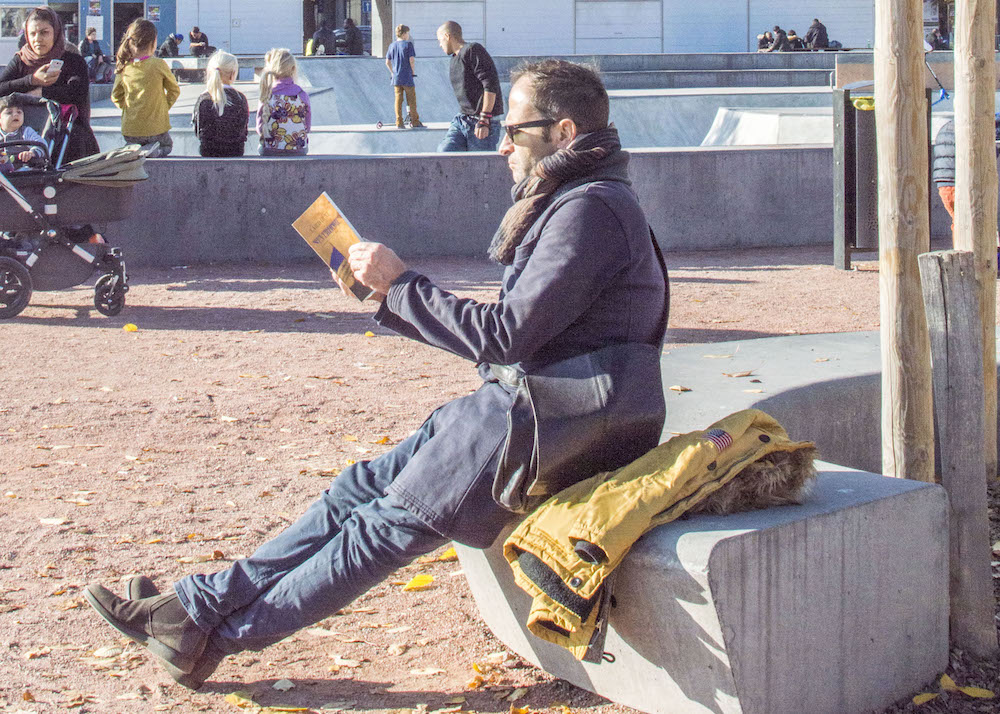 During my stay in Geneva a couple of weeks ago, I noticed something. There were more people reading in public than I ever see in Singapore. While waiting for buses and trams, more than a handful of people were reading at the stops. As I strolled through the weekend bric-à-brac at Plainpalais, I saw a few people basking in the sun with their books. This one man stood out to me as he sat beside the loud and active skatepark. He in contrast was the picture of serenity as he read and drank his coffee.

The other place where I saw people read in public, excluding the libraries, were the trains in both Germany and Switzerland. Even for short commutes, there’d be people reading. However, the proportion of commuters reading was small compared to what I remember from fifteen years ago. The rest of the commuters were mostly engaged with their phones, playing games, blasting music through their headphones, etc. That’s pretty much what the majority does in the subway in Singapore too — fiddle with their phones.

“Wait a minute!” You might protest. After all, couldn’t it be that people are reading ebooks on their devices? A few people might do that. Though regular music leaking on my left and moving people on the screen to my right suggest otherwise. Yes, of course, that person slinking in the corner with a Kindle is reading an ebook. Others with tablets and smartphones, most likely not.

I’m sure a lot of us suspect that mobile devices are to blame for the decline of reading books. The Atlantic‘s at least reported statistics proving that reading books has been on the decline. While correlation doesn’t necessitate causation, it’s good reason to take a closer look. Apparently in Hong Kong, smartphones do have a significant negative impact on publishing.

At the same time, there have been studies showing that at least youths nowadays are still reading books. But where are they? When I was younger, it wasn’t uncommon to see them reading in public. I remember when I was still in ninth grade, I’d see students at the bus terminal reading books for pleasure while waiting for their next bus. They would continue reading as they boarded their buses.

Perhaps that’s where I should start looking again: bus stops filled with students at 6.30 a.m. Alas, I can’t recall when I last stepped out of the house before sunrise.

The Culture of Reading in Public

Besides smartphones, I’m starting to think that priding oneself in constantly being busy also means reading less. The idea of filling commuting time with reading seems to stress people out when they have emails to send, reports to finish, calls to make and more. In the pursuit of who knows what, I’ve overheard so many boast and compete with each other about who’s the busiest.

“I only slept four hours last night.” “Don’t complain. I slept half of that time.” “How about my client called me at 2 a.m.! I was already in bed!” “Jokers. I didn’t sleep at all. I was busy doing work.” “I wanted to read on Sunday but then my boss emailed me to prepare for our Monday morning meeting.”

I’ve heard these diatribes over and over again. I believe that many do tell the truth. Others though, they embellish. To make their sorry plights believable, they must appear busy at all times. To read in public means to not be such a busy person. Where’s the pride in that?

Reading in Public: Going Against the Norm

Every now and then when I arrive early to meet friends, I end up reading. Doesn’t matter if I’m reading at the subway station or at a café. I’ve had people walk past me at the station, eyeing me weirdly. One friend called me a nerd before when he arrived at a café we had agreed to meet at. Another asked me what I was carrying a book around for.

Passing on the Public Reading Culture

My dad would read a book in the park while my sister and I played as children. He always bought me a book before an extended trip. My grandmother’s de facto gifts to me used to be books. She devoured books more so than TV shows. I read because they did so first.

Reading in public is one way to pass on the love. Children whose parents don’t read will see others read in trains, at the parks, on flights, at cafés and wonder what it is about books that you can’t put yours down. You took your book out in public and couldn’t part from it. That should invite intrigue for some.

Why I Think It’s Important

At the end of the day, I guess my concern isn’t so much about the apparent displacement of reading. To me what matters is celebrating the love for books. People reading in public is the greatest way to do just that because it is an outward expression that others witness as well. Geneva was proof that reading in public isn’t such a far-fetched call to action.

What are your thoughts on reading in public?