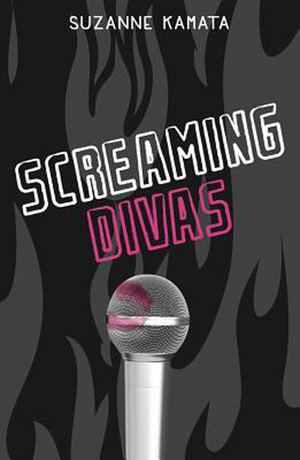 At sixteen, Trudy Baxter is tired of her debutante mom, her deadbeat dad, and her standing reservation at the juvenile detention center. Changing her name to Trudy Sin, she cranks up her major chops as a singer and starts a band, gathering around other girls ill at ease in their own lives.

The fourth member is Esther Shealy, who joins as a drummer in order to be close to Cassie—the long-time object of her unrequited love—and Harumi, her estranged childhood friend.

Together, they are Screaming Divas, and they're quickly swept up as a local sensation. Then, just as they are about to achieve their rock-girl dreams, a tragedy strikes.

Screaming Divas had a couple of elements that I particularly like: music, friendship and diversity.

Music effectively tied all four main characters together despite all their differences. Trudy, Harumi, Cassie and Esther had very different musical backgrounds, yet they came together to form a punk band. Each one of the girls had something to bring to the table, which also led to a lot of conflict. I think that is one thing I particularly appreciated. They didn’t always get along, which added a facet of realness that I often find lacking in books.

Diversity existed in several forms. The girls came from varying socioeconomic backgrounds, one of them was confused about her sexual orientation, and Harumi came from a strict Japanese family. Their dispositions were very well integrated into the plot of Screaming Divas, such that their backgrounds had an influence on their thoughts, choices and actions without undermining who they were as individuals.

The writing however, sometimes felt disjointed. I’m not sure if it was meant to be experimental to give a psychedelic feel to fit with the mood of Screaming Divas but I wasn’t really getting it. It didn’t help that there were four main characters among whom the plot kept jumping around in a bid to capture all their stories. Keeping the characters straight became a little difficult as a result and also led to characters that were less developed than they could have been.

Maybe the plot could’ve been drawn out a little more to allow readers more time with each of the characters. In fact, since the dramatic arc was somewhat stilted, Screaming Divas as a whole would’ve benefitted from being longer. A few more scenes needed to be written to fill in the gaps that especially led to the dramatic ending. The climax basically came out of nowhere and didn’t end with a complete resolution.

Screaming Divas Opened up a New Place to Me

Nonetheless, the characters intrigued me, and subcultural endeavours always make for fascinating reads because they transport me to people and places that I’ll otherwise never have access to.