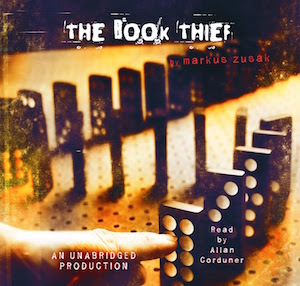 It is 1939. Nazi Germany. The country is holding its breath. Death has never been busier, and will become busier still.

Liesel Meminger is a foster girl living outside of Munich, who scratches out a meager existence for herself by stealing when she encounters something she can’t resist–books. With the help of her accordion-playing foster father, she learns to read and shares her stolen books with her neighbors during bombing raids as well as with the Jewish man hidden in her basement.

As many children left their families for foster parents during World War II, so did Liesel and her brother, except he did not survive. He never did reach the doorstep of Hans and Rosa Hubermann. The loss of her brother was Liesel’s first encounter with death. It was then too that Death started taking an interest in her. In fact, Death narrates her story in The Book Thief.

Readers are invited to adopt a different perspective as the events of Liesel’s time on Himmel street unfolds, from adopting to her life with her foster parents, to hiding a Jew in their basement, and to her friendship with Rudy Steiner. Of course, Liesel’s motivations for becoming a book thief are also revealed.

Instead of sticking to one format for this book, I alternated between the audiobook and the ebook. For the audiobook, I enjoyed listening to Allen Corduner. It somehow made the narrative form of The Book Thief more real for me. Though it is a good thing I read parts myself too because of the various illustrations.

First off, I liked that Death was the narrator. Some may think it’s morbid but I thought it was fitting. It added to the gloominess of World War II. It also allowed for thoughts on things humans otherwise take for granted.

In spite of rating this a 5 out of 5, I must admit that I could not read this in one sitting. It wasn’t so much that at 550 pages in print, it is a long book. It was more so because some parts felt somewhat long-drawn. Perhaps that was because the plot didn’t matter as much as the events themselves. There were parts that purposely went against the grain of building suspense before a climax, as plots conventionally are expected to be written. Instead, readers are challenged to think about various issues.

I think Markus Zusak did a splendid job in writing Liesel’s story. He captured her increasing awareness for the world around her very well as she matured and her cleverness added a timeless appeal. She stopped a lot to ponder upon things she knew little about and sought to find out more.

How words shape the way we act and think has always been an intriguing topic for me, so I very much enjoyed reading about Liesel learning to read and write and how that made a difference to the people around her. Liesel’s character was also an intriguing one as demonstrated in the very different concerns and relationships she had with Hans Hubermann as opposed to Rosa Hubermann, and with Rudy Steiner, her best friend, as opposed to Max Vandenburg, the Jew.

The writing style of The Book Thief is simple and clear. Still, even though this book has been targeted at older juvenile and young adult readers, it is so multi-faceted, it should appeal to the adult reader as well. I wouldn’t recommend it to those who are looking for a quick read but for those looking to be challenged, this is a great book.