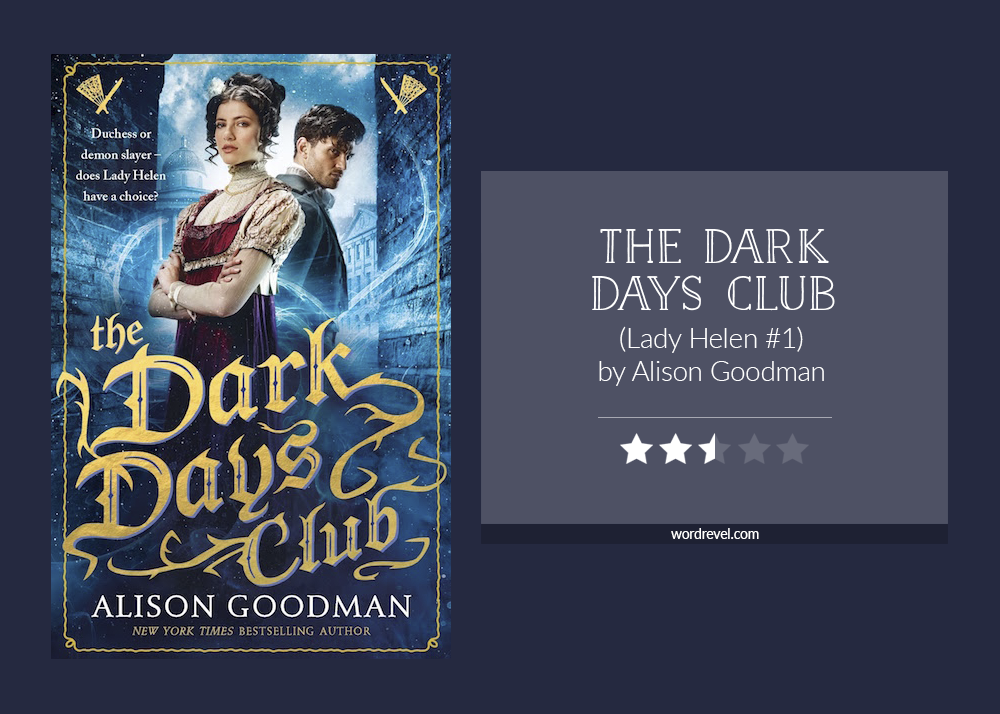 London, April 1812. Lady Helen Wrexhall is set to make her curtsey to Queen Charlotte and step into polite Regency Society. Unbeknownst to Helen, that step will also take her from the glittering ballroom of Almack's and the bright lights of Vauxhall Gardens into a shadowy world of demonic creatures, missing housemaids and deadly power. Standing between those two worlds is Lord Carlston, a man of dubious reputation and infuriating manners. He believes Helen is destined to protect humanity, but all he can offer is danger, savagery and the possibility of madness. Not the kind of destiny suitable for a young lady in her first London Season.

When I first heard of The Dark Days Club, I was intrigued. Though I hadn’t read Jane Austen novels nor any of the popular series of Cassandra Clare, I knew those names held promise. Yes, Alison Goodman is an author unto herself but sometimes it’s hard to discount influences. With that, I first picked up Pride & Prejudice. It took me more than a month to reach page 84 before I got too exasperated and put it on hold. I didn’t try City of Bones. I dove into The Dark Days Club, not wanting to postpone it too long.

The first few chapters were as dreary to me as Pride & Prejudice. The Dark Days Club prattled on without anything to catch my attention. The prose was quaint — I assume to reflect the language of the Regency period. Nonetheless, I persevered. I’d seen so much praise for it, I hoped I’d eventually be hooked too. Sad to say, I wasn’t. Although, the turn of events towards the end did make me want to pick up the sequel anyway. Now that the groundwork has been laid, I hope that the sequel will be packed with more action to grip me.

Sex was a thoroughly taboo topic during the 1800s. It wasn’t proper for a lady to talk about it in public. Even in private, the circumstances rarely, if ever allowed it. To peg evil to sexuality then, was fitting. However, the way these elements were implemented made me uncomfortable. View Spoiler »The monsters in question fed on the carnal desires of humans. They also killed using tentacles that they drove into their victims who had orgasms at those points. Those are images I’d much rather not have had to deal with. « Hide Spoiler

Romance bubbled below the surface

Unnecessary romance drives me mad. I’m glad to say that The Dark Days Club didn’t force it where it didn’t belong. Romantic tensions existed, so there’re ships to root for. Still, I appreciated the balance as the focus was much stronger on the imminent danger that the characters faced.

I was most impressed by the historical accuracy that the setting presented. Naturally, Alison Goodman took some creative liberties but she noted them in her acknowledgements. While she wove in a fair bit of fantasy, she ensured that she kept the backdrop of the Regency London period intact.