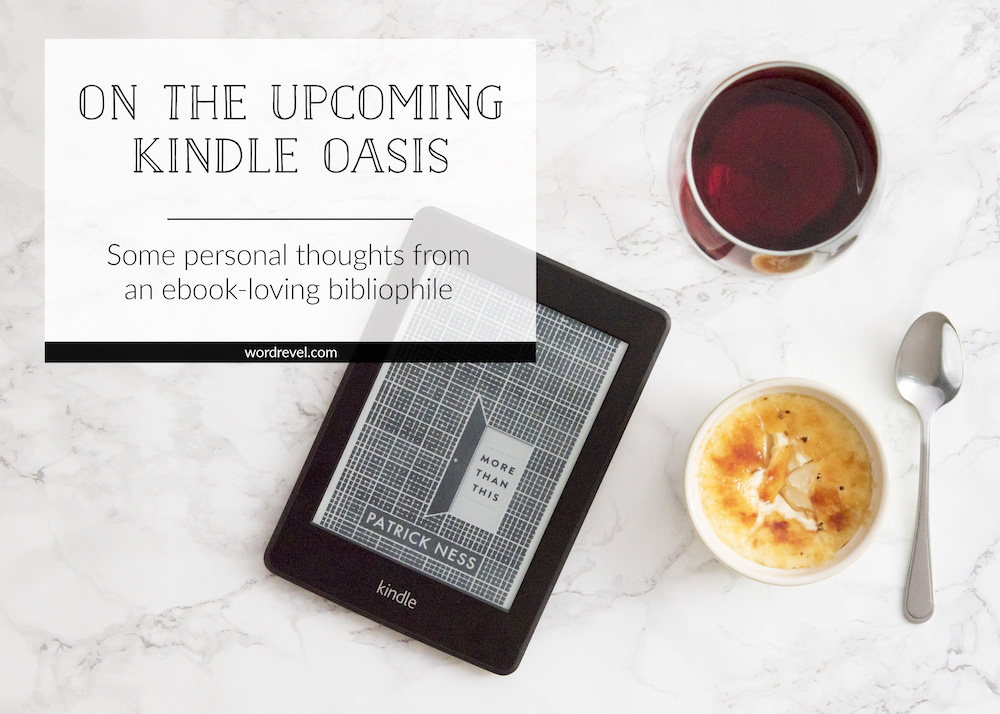 Waiting Over a Decade

I wanted an ebook reader since I was 9 years old. That was in 1999. Back then they didn’t exist in the market. Hardly any bibliophile even dreamt of one. I first learnt of its early developments through Medizini, a monthly poster magazine for children available at German apothecaries. They used to have a column predicting inventions of the near and distant future. None fascinated me more than a tablet for reading digital books.

Naturally, when Amazon announced its first Kindle in 2007, I was excited. It was completely out of budget for a high schooler but I knew the day I’d own one was nigh. I studied the specifications and reviews of each new Kindle device until the first generation Paperwhite was introduced in 2012. By then ebooks were readily available and the Paperwhite fulfilled a lot of personal requirements.

I Love My Paperwhite, But…

The biggest drawback of my Kindle Paperwhite is the pixel density. 212 ppi looks perfectly crisp to most people. Some though, are able to discern every other pixel. I’m one of them and it bothers me. I want to read, not count pixels. That’s why I welcomed the announcement of the Voyage. The 300 ppi screen tempted me. Sadly, the bezels were a deal breaker for me. The dots of the “PagePress” (haptic feedback region) are so distinct, I got cross eyed just looking at the Voyage. Evidently, I’m easily distracted by insignificant visual details.

Charms of the Kindle Oasis

This week Amazon announced the Kindle Oasis. In the days leading up to Wednesday, several pictures had been leaked. They confused me. I thought they were far fetched. In the end, they came true. After mulling over the design, it has grown on me. For one, an Oasis would be an upgrade for me. For another, I don’t like the bezel markings on the Voyage. Certainly, I must be in the minority — it’s a quirk, after all.

You’d think that with my need for every millimetre to be balanced, I wouldn’t like the design of the Kindle Oasis. The screen is off-centre! How does one wider vertical bezel not bother me? Well, I appreciate the raised back edge against the rest of the thin device. When I read on my current Kindle Paperwhite, I rest the bottom edge on my pinky finger. It’s the most comfortable grip, though It doesn’t allow me to hold it as long as a paperback. Ergonomically, I do expect to last longer with the funky new Kindle Oasis design. The other thing: the front no longer has a logo, which makes for a more unobtrusive reading experience.

Another welcome hardware spec is the addition of more LEDs to even out the lighting. On my Paperwhite I do perceive the faint light beams from their source points. That hasn’t been too big of an issue weighed against clip-on reading lamps. Still, an even white background makes it that much more pleasant to read on an e-ink display.

What I’m Actually Looking For

Needless to say, the design of the Kindle Oasis isn’t what I’ve been hoping for. Personally, I want a slightly bigger screen to mirror the page size of a standard paperback. That would push the screen size to about 6.7" which equals that of a Kobo Aura H2O. I’m also looking for finer font control. The font size increments aren’t as gradual as I’d like on my Paperwhite and font choices are very limited. Don’t get me started on line spacing.

Ideally, I also want an eReader with white bezels that blend more with the screen. While I’ve gotten used to the black frame around my Kindle’s screen, it’d still be better not have it there, constantly reminding me that I’m not reading on paper. At least an upgrade would mean a flush bezel and screen. That level surface is one more step away from the awkward framing.

Surely, at least 90% of the news reports on the Kindle Oasis maintained that the base price is madness. Who would buy an eReader for US$290? Never mind that Amazon positioned it as even more premium than its Kindle Voyage. So many decried Amazon (or rather Jeff Bezos) for losing touch with consumers. I disagree. Jason Perlow made some pertinent observations on ZDNet about why a luxury eReader has its place.

When you break down the cost, the Oasis doesn’t actually eclipse the Voyage. $90 might seem like a huge difference, particularly when that’s a 50% step up from the Voyage. However, there’s an important factor which surprisingly few have accounted for and that’s the case.

Buy the high-end Amazon leather case for your Voyage and you’ll be set back by $85. Essentially, a Voyage costs as much as the Oasis with the Amazon accessories. The Voyage leather case doesn’t even have an inbuilt battery to justify its price. Sure, nobody’s forced to buy the Amazon case for their Voyage. By way of comparison though, I think this shows that the Amazon price for the Oasis isn’t entirely off the rails.

After assessing the Kindle Oasis against my Kindle Paperwhite (2012), I might take the plunge for that upgrade. I’d just need to make even more use of my digital library subscriptions and read 25 ebooks. I can easily do that in less than half a year — I read more than a hundred books per year in 2014 and 2015 and I’m not slowing down in 2016. In any case, I’m waiting till the reviews come in after the Kindle Oasis releases end of April.

At the same time, I’m waiting for Kobo’s next move. A refreshed Kobo Aura H2O with higher pixel density might better meet my needs. If it doesn’t, I’ll simply cancel my Hulu subscription and splurge on the Kindle Oasis. Who needs TV shows anyway with a shiny new eReader in hand?

What’s your stand on the Kindle Oasis? What do you wish for in an eReader?