Disclosure: I received a finished copy of A Closed and Common Orbit from Pansing Books, a regional distributor, in exchange for an honest review. This does not affect my opinion of the book or the content of my review. 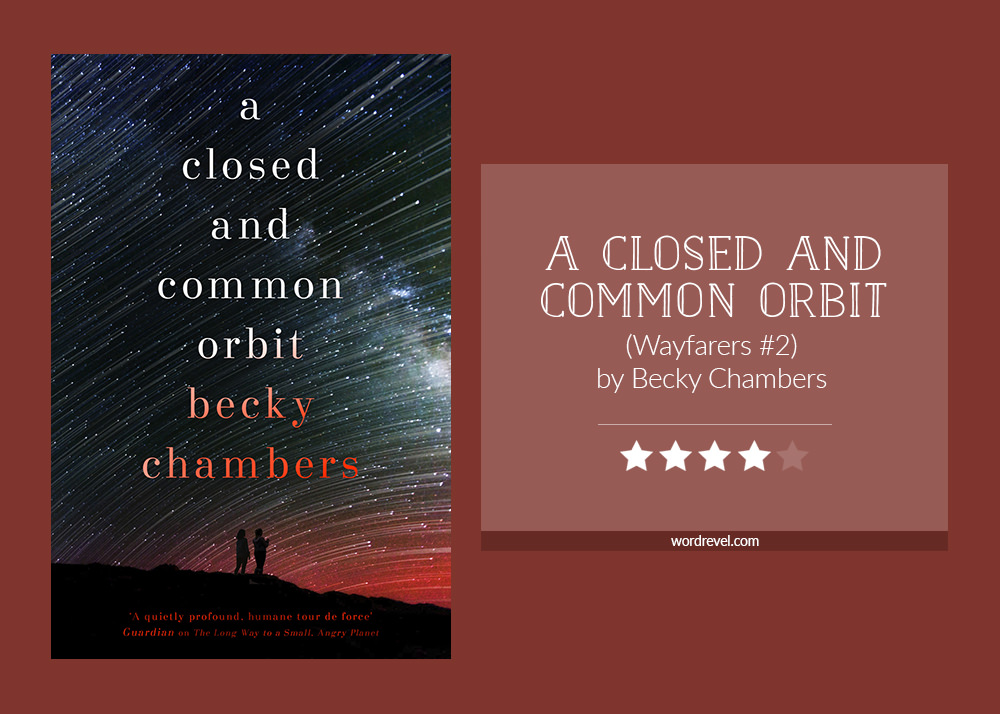 Once, Lovelace had eyes and ears everywhere. She was a ship's artificial intelligence system – possessing a personality and very human emotions. But when her ship was badly damaged, Lovelace was forced to reboot and reset. Now housed in an illegal synthetic body, she's never felt so isolated.

But Lovelace is not alone. Pepper, an engineer who risked her life to reinstall Lovelace's program, has remained by her side and is determined to help her.

Because Pepper knows a thing or two about starting over.

Pepper was born Jane 23, part of a slave class created by a rogue society of genetic engineers. At ten years old, she had never seen the sky. But when an industrial accident gave Jane 23 a chance to escape, she jumped at the opportunity to leave her captivity.

Now, recreated as Pepper, she makes it her mission to help Lovelace discover her own place in the world. Huge as the galaxy may be, it's anything but empty.

Remember how I thought The Long Way to a Small, Angry Planet was slow? A Closed and Common Orbit was even slower!

Going into A Closed and Common Orbit, I was surprised that there were two parallel running storylines. I had expected the focus to be on Lovelace and how as an AI, she would come to navigate the universe of sentient beings. That’s the part that made me excited about picking up this book.

The second storyline was that of Pepper in the past. Her backstory made me zone out every now and then because I wasn’t as interested about it, although I could see why the author made this creative choice.

The parallel storylines gave rise to interesting comparisons. Both Lovelace and Pepper had to build their lives from the ground up. They each had to learn how to live with and among others. In fact, they had to be socialised all over again. For Lovelace that was because she had taken on a new body that related differently to her surroundings. For Pepper it was because she had spent her first ten years in a controlled environment, separated from free society.

Reading about how they made sense of things also made me think about the potentially tenuous lines the separate humanity from machines.

One part I had looked forward to were the interactions among the various species. These aspects didn’t disappoint and were such a a joy to read, especially because of the underlying theme, acceptance despite differences. Seeing how they all adapted to one another was very engaging as well.

Overall, I liked A Closed and Common Orbit

In the end, the parts I liked about A Closed and Common Orbit outweighed my misgivings because they were so well thought out with great attention to the smallest details.