Word Revel. A blog that celebrates the written word, especially in the form of books. Although photography also features very heavily because y’know, pictures speak a thousand words.

I talk about books, review books and share my love for books in any and every way I see fit. This means I also use this space I have carved out to feature book photography, share my thoughts on publishing news and to interact with anyone who will celebrate books with me. 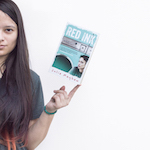 Joséphine. I am passionate about a great many things ranging from reading to baking to sports to photography and beyond. While Word Revel primarily focuses on books, I occasionally do sneak in other personal interests.

Here on Word Revel I chronicle the books I’ve read, discuss topics pertaining to books, reading and publishing. I mostly read in English, though once in a while I also read German books.

Thanks to the marvellous bookish community I have developed a particular fondness for #bookstagram, which offers up a wondrous platform to marry books and photography on Instagram.

Currently based on this island affectionately known as the Little Red Dot.