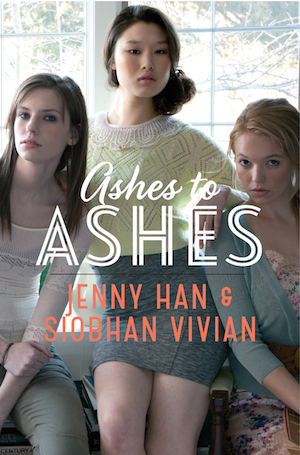 Think Mary, Kat, and Lillia have nothing left to lose? Think again. The fiery conclusion to the Burn for Burn trilogy from New York Times bestselling author Jenny Han and Siobhan Vivian.

They only meant to right the wrongs. It was about getting even. Burn for burn.

But the fire they lit kept raging… Reeve ended up hurt, then Rennie ended up dead.

Everything will turn to ash if they don’t stop what they started. But now that Mary knows the truth about what happened to her, will she want to?

Secrets drew Lillia, Kat, and Mary together. The truth might tear them apart.

Disclaimer: There are spoilers for the first two books in the series, Burn for Burn and Fire with Fire.

I did not see this coming. I thoroughly enjoyed Burn for Burn and Fire with Fire. Ashes to Ashes, however, left me cold. I was already 84% through the book and yet I couldn’t bring myself to finish it. That thought keeps nagging at me but reading the last few chapters would for me be a waste of time.

Burn for Burn and Fire with Fire were twisted. That’s for sure. But they read like contemporary books. Occasionally there were glimpses of paranormal elements but they didn’t establish themselves as such, leaving the reader guessing. That I until the end of Fire with Fire when Mary was revealed as a ghost who haunted Jar Islands.

Knowing that Mary was a ghost should’ve been a great enough deterrent for me to stop at the second book. But no, so liked the first two books so much, I was convinced I’d enjoy Ashes to Ashes as much. I didn’t.

The thing is, I generally don’t like stories that border on horror. I have no interest in reading about ghosts that haunt the living. Less so if a main character is a ghost. Basically, I felt like the first two books duped me into reading something I couldn’t enjoy.

Sure, the writing remained solid throughout the series. The characters became more complex in the last book, especially Reeve, at least to the point where I stopped reading. I had no desire to find out how everyone patches up, which relationships survived and which ones didn’t. When I realized where Ashes to Ashes was going, I just wanted to give up but because I enjoyed the first two books, I tried to give Ashes to Ashes a chance.

I guess what bothers me is that I feel like I got tricked into reading something I don’t like and would’ve stayed away from if I had been clearer about the elevated ghost elements. Seriously, ghosts accessing dreams, manipulating minds into killing themselves, driving people insane, etc? I don’t care the slightest bit about such stories. Everything we read, see and hear affects our sub-conscious minds. Horror isn’t good for my mind. It slowly eats away at it. Same reason I don’t watch horror movies. I don’t see the thrill in them and I can’t derive the slightest ounce of enjoyment.

In a lighter note, the song You Don’t Care About Me by Shakira perfectly conveys Mary’s feelings towards Reeve throughout the series since she couldn’t let go of her past with Reeve whom she blames for her death.