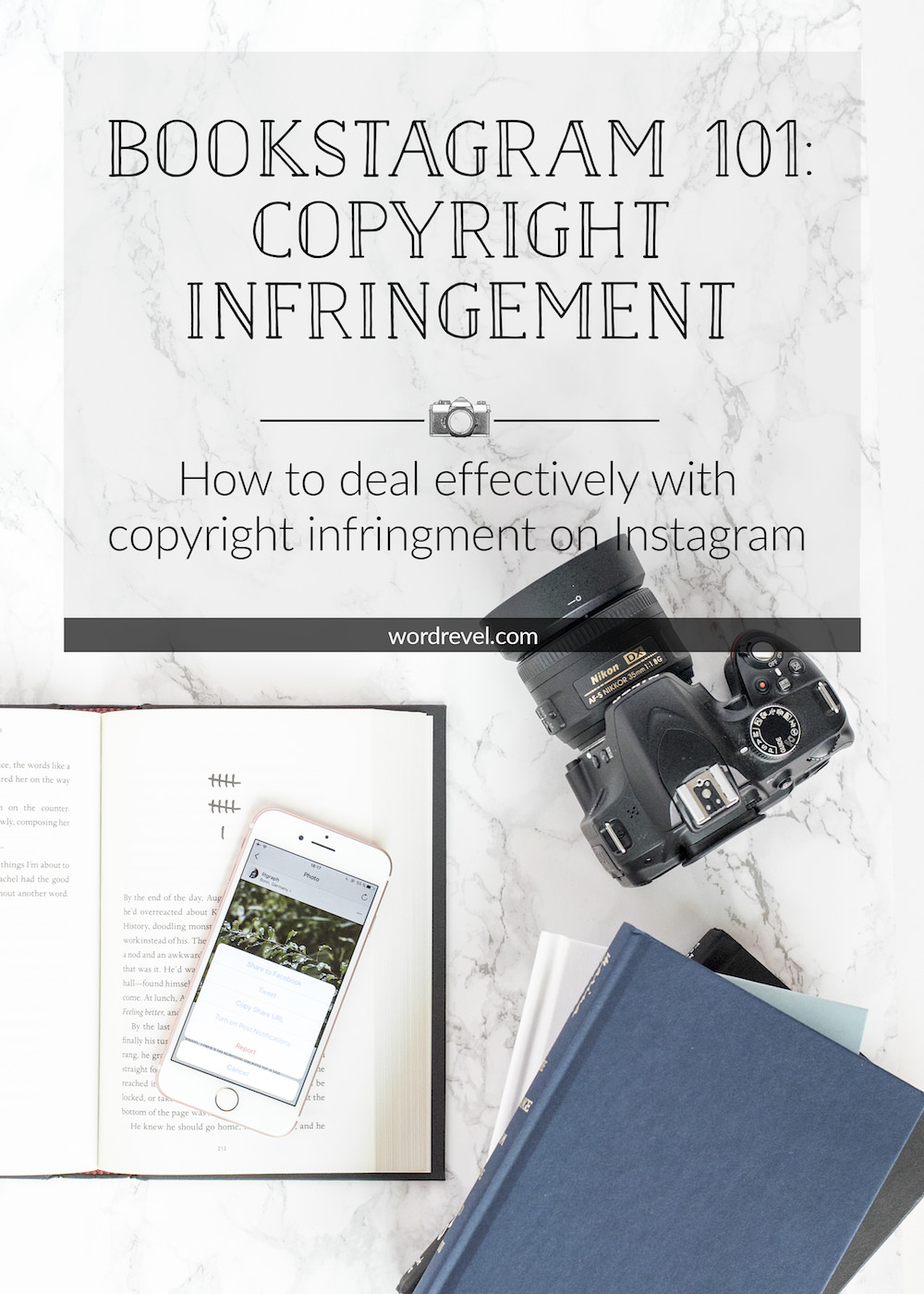 One frustrating thing about bookstagram is copyright infringement. This happens when someone else reposts an image without permission from the photographer or illustrator. To be clear, crediting the content producer doesn’t absolve anyone of violating copyright. The point of contention is permission.

Did the content producer post their image with a Creative Commons License, or explicitly state that others may repost and/or use it? If no, then it’s copyrighted and others have to seek permission from the copyright holder before using it.

With Credit but no Explicit Permission

For the majority of cases I’ve seen on bookstagram, copyright infringers don’t mean any harm. They add credits in the caption and tag the bookstagrammer whose photo they’re reposting. It’s clear that they’re not trying to pass off someone else’s photo as their own. Often they’ve seen others do this and so they assume it’s okay. It does seem that many bookstagrammers are alright with this, but that tends to stem from the lack of awareness that they have bigger rights. This is evident when they go on to thank others for reposting.

On the flip side, there are those people who create bookstagram accounts but leech off others’ content. They swipe photos that they like and post them as if they were their own. Just a few weeks ago, someone went as far as posting a photo with another bookstagrammer’s face, then claimed it as their own. That’s creepy and messed up, but there you have it — the main reason I felt the need to include a tutorial on copyright infringement in my Bookstagram 101 series.

How to Deal with Copyright Infringement

When you try to report copyright infringement via the Instagram app, you’ll find that you have to jump through a lot of hoops. Unlike spam, reporting intellectual property violation isn’t native to the app. Instead, you’ll have to keep following links from one page to another. Along the way you’ll land on the Reporting Copyright Infringement page. There they advice users to contact the copyright infringer first.

Rather than commenting on the offending post, send a direct message (DM) first. Those who knowingly take other people’s photos have a tendency to block anyone who approaches them about copyright. When you send a DM, this ensures that even if they change their usernames, it’ll be reflected in your Instagram inbox. As the saying goes, “You can run, but you can’t hide.” That’s the principle you apply by contacting them privately first.

After sending a DM, you may want to comment on the relevant post(s) as well. What I do is to inform them that I’ve sent them a DM. This is because Instagram splits those received from someone you follow and those from strangers, so they might not notice your DM otherwise. If they’ve seen the DM but don’t respond within 48 hours, and worse, continue to post new images, then it’s clear they’re ignoring the issue. That’s when a public comment asking them to take down the photo is the next measure.

If the copyright infringer refuses to comply with take-down requests, go ahead and fill out Instagram’s copyright report form. It’s a little lengthy with a lot of checks and balances. They do that to reduce fraudulent reporting.

The other thing is, only copyright holders can fill this out. You can’t help a friend out by reporting on their behalf. The affected party has to fill out the form themselves. That being said, as long as you have sufficient proof, Instagram will take down photos legitimately reported for copyright infringement.

Did someone steal your photos on Instagram before? How did you deal with them?