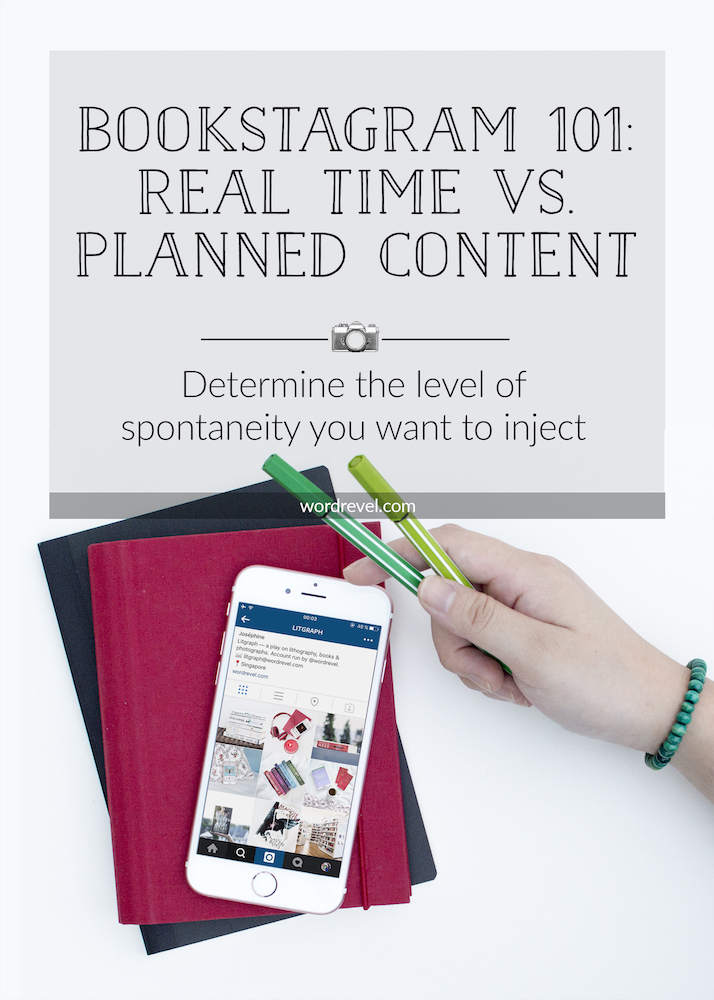 Initially I planned to either cover apps that aid productivity or programs to edit photos on computers. The more I thought about it, the more I became convinced that we should tackle this topic first: real time vs. planned content. There are different approaches and there’s no hard and fast rule but it is worth thinking about levels of spontaneity. Knowing which approach you choose will make it a lot easier to keep your bookstagram account going.

The difference between these two is that when you post in real time, you upload photos on Instagram straight after taking them. Planned content (usually) means taking photos ahead of time and posting them later. I say usually because planned content could also entail a frame set up for the sole purpose of a bookstagram post and still be uploaded straight after.

Which Approach is Better?

Neither, really. It depends on your resources and on what your goals are. Personally, I’ve a hybrid going on @wordrevel with a strong tendency towards planned content. I post most of my photos shortly after taking them but every so often specifically lay things out for my photos. I recently started an experimental account, @litgraph where my content will predominantly be planned and photographed in advance.

To decide which approach suits you best, let’s break them down.

Spontaneity is the key factor of real time content. You capture what’s before you and post that. Examples would be photos taken at bookstores, libraries or perhaps even your own bookshelf as well as your current read at a café or sprawled out on your bed. It’s a very interactive way to communicate what is happening in your life right now.

Doing this requires little investment in time because you’re already in the moment. It could be considered a more authentic voice because you’re “not putting on a show”. You’re portraying yourself through your books the way you are.

Posting photos in real time also means that you can cover events very quickly. That’s what I did when I attended the Frankfurt Book Fair last year. I still relied on my DSLR to take the photos that I wanted, then transferred them to my phone via Wi-Fi. This allowed my followers who weren’t able to attend to see the book fair through my lens.

The problem is that when life takes over, your bookstagram account inevitably becomes dormant. During the times that you’re not reading, not visiting bookstores and aren’t adding books to your shelf, you’ll not have any content to post. To stay relevant in social media, posting regularly can make a huge difference. Although, don’t get too hung up on it. There are bookstagrammers who disappeared for months and when they returned, their followers welcomed them back with open arms.

A huge benefit of planned content is that you’ve got your photos ready to roll. Even on days that you aren’t in the mood to press a shutter, you have something to post. It’s also very useful to take photos over the weekend when you can take advantage of daylight. Many of us only reach home from work or school after sundown — not ideal times to take photos. Planning helps combat this.

Planning also helps to keep a consistent feel to your feed. For instance, if you want to post photos only taken outdoors like @abookishheart used to do, then you do need to plan. If you want to stick to pretty consistent backgrounds like @sapphire.reads and @outofthebex do, then you definitely need to plan. Taking photos in advance takes the pressure off during the times that you’re unable to put together new photos.

One downside is that some people consider planned content “unattainable”. I can’t remember who commented this once on one of my photos but that person preferred real time photos with less emphasis on attaining a perfect feed. It does make sense since after a while, photos that look identical can come across as rather clinical. That’s were you’ll need more creativity to break the monotony, particularly if you don’t want to change the overall look of your photos.

Marrying real time and planned content is my solution to address the problems of strict adherence to either approach. I plan @wordrevel such that I alternate between dominant white and colour, forming a chequered pattern. This makes everything look cohesive while allowing me to post whatever I’m in the mood for. When I have time, I take a few extra photos in case I need fillers.

Abeer mixes books and lifestyle exceedingly well yet still manages to make everything look very cohesive with her brown tones. She shows us a glimpse of her life through a lot of spontaneity, sometimes falling back on planned content.

Alison also sticks to brown and white. A lot of her photos are specifically set up for her bookstagram photos but when she sees colour in her life that matches, she adds her books to the frames and shares those moments.

Judith could be considered a part-time bookstagrammer. She also documents food and other life snippets. Since she keeps things clean and simple, any book photographed on a white or wooden background fits right in.

Determine Your Level of Spontaneity

As I already mentioned, your level of spontaneity depends on your goals. Think about how much time you’re willing to invest. Do you want to integrate other aspects of your life? If you only want to feature books, do you want them to be “models” or do you want to portray them in a more personal light? Do you want to recommend books or do you want to have conversations with others who have read them too?

Considering all these aspects should help you decide which approach to take with real time vs. planned content.

That being said, planning is always involved. You probably don’t want to bore your followers by posting photos of the very same book ten times in a row. Chances are you won’t have anything new to say and your followers might grow bored. Even if it takes you a month to read a book, maybe insert a book recommendation or a couple of books that you plan to read soon. That will help to keep your content fresh and the converation going between you and your followers.

What are your thoughts on real time vs. planned content? Do you prefer bookstagram accounts that are more spontaneous or more curated?