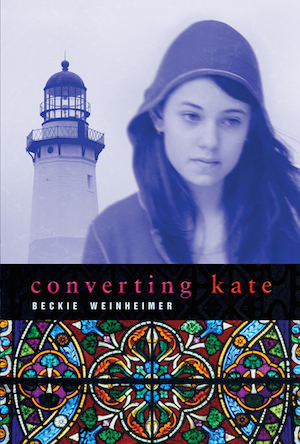 Kate was raised in the Holy Divine Church it influenced everything from her homeschooling to her handmade clothes. But ever since her unbelieving father's death last year, she has suspected that there's more to life than memorizing scripture.

Taking advantage of their move to a new town, Kate to her devout mother's horror quits Holy Divine. She joins the cross-country team, wears shorts to public school, and even tries a traditional Christian church. As she struggles to come to terms with her father's death and her mother's unquestioning beliefs, Kate discovers there's a big difference between religion and faith and that the two don't always go hand in hand.

Kate is a character I’m going to remember for a long time to come. She is someone I’d like to be friends with if I were to meet her in real life. Most of the time I remember books for their stories and their ideas but I will remember this book for the person whose story was portrayed and whose ideas seeped through the pages.

Converting Kate is one of those books that are very unassuming when you first pick them up. I wanted to read it because the portrayal of religion and religious beliefs in fiction tends to bring a depth that doesn’t get explored a lot. Somehow characters’ faiths and beliefs aren’t brought up much, or at least haven’t been brought up much in the YA books I’ve picked up over the past year. That’s why I’ve been seeking them out more intentionally and that is how I found this book right here.

When I read Converting Kate, I was surprised how multifaceted the plot and the characters were. I thought I’d just be reading a book that dealt with questioning the religious order of the (fictitious) Church of the Holy Divine and Kate grappling with her faith. I got so much more out of the book than that.

While loss of a loved one and grief are common plot lines, it felt different reading about Kate coming to terms with the death of her father. Kate’s parents had been divorced largely because her father wouldn’t convert into her mother’s religion. I think that these circumstances gave a voice to those whose parents don’t share the same faith. There’s a constant tug-of-war between the parents with regards to how their children should be raised. Even if one parent accedes, that doesn’t reduce the internal struggles of their children, especially when adhering to one religion over the other also feels like expressing greater love for one parent over the other.

Besides the religious aspects of Converting Kate, I also liked the exploration of how books influence our lives. If Kate’s mother had her way, Kate would’ve only read the Bible and religious paraphernalia distributed by the Church of the Holy Divine. Kate however filled her mind with the literature that her father held so dear.

Coming from such a conservative household, Kate wasn’t prepared for things that were considered evil to be commonplace in the rest of the world. Talking to boys and not to mention, being alone with one were very foreign concepts to her. Fitting in socially was a challenge, and when she came across the possibility of homosexuality actually being acceptable in society, she was overwhelmed. Her responses and thoughts on all these matters along with her questioning mind made me want to sit down with her over a cup of tea to talk about all these things that left her unsure.

Since Kate also was cross-country runner, I must say Converting Kate contained a lot of elements that get me excited when I find them in books: depth (in narrative and characterization), sports, religion, and strong friendships among the characters.