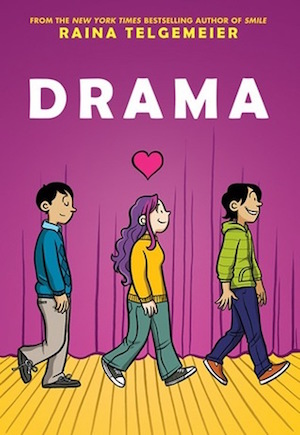 Callie loves theater. And while she would totally try out for her middle school's production of Moon Over Mississippi, she can't really sing. Instead she's the set designer for the drama department stage crew, and this year she's determined to create a set worthy of Broadway on a middle-school budget. But how can she, when she doesn't know much about carpentry, ticket sales are down, and the crew members are having trouble working together? Not to mention the onstage AND offstage drama that occurs once the actors are chosen. And when two cute brothers enter the picture, things get even crazier!

Some of you might recall that I blogged about Drama being under review at my local library. It was in their online catalogue but listed as “under review” for over half a year. I had placed a reservation for it and trouped down to the library to collect it after I received an allocation notification. The librarian told me that there was a system error. She couldn’t tell me either when this title would be available again. When I could get my hands on Drama at the Frankfurt Book Fair in October, I pounced on it. It’s only natural to want what you otherwise can’t have, aye?

Well, after reading it, I wondered why the National Library Board (NLB) was fussing over it for so long. Just bump it up from the Middle Grade shelves to the Young Adult ones and be done with it, I thought. Even after reading Drama, I didn’t think that it warranted censoring. Though given the precarious attitudes towards homosexuality, I could see why Singaporean parents might not want their children to read this book. For teenagers, however, it’s a very tame representation of homosexuality since it isn’t even crucial to the main plot.

When it comes to graphic novels, I prefer realistic over abstract illustrations. That’s why I was very partial to Drama. The scenes were simple but impactful with clear details. They weren’t breathtakingly beautiful or anything, but they were clear and pleasing and to look at.

Overall, I thought Drama was a rather sweet book, detailing the lives of middle schoolers. It dealt very well with the confusion that comes with being in your early teens. There are so many first encounters during that time which can lead to a fair bit of awkwardness. Middle schoolers would surely relate to these things while reading Drama. For older crowds, these offer much laughter and knowing smirks. Great stuff for reminiscing about simpler days.

The reason I enjoyed Drama so much was the focus on theatre. I studied theatre at A Levels and while the hours were insane, I have so many fond memories. Being stage, working with others to bring a play to life is magical. There’s so much creativity that goes into acting and designing, sets, costumes, lights and sounds. This effort was so well-documented within the pages of this graphic novel, which made the story all the more believable.

Since there’re so many considerations that go into staging play, there’s a multitude of things that can go wrong. This offered lots of opportunities for conflict. I’m glad to say that Raina Telgemeier more than took advantage of those moments.

PS: My first edition hardcover was printed in Singapore. What irony.