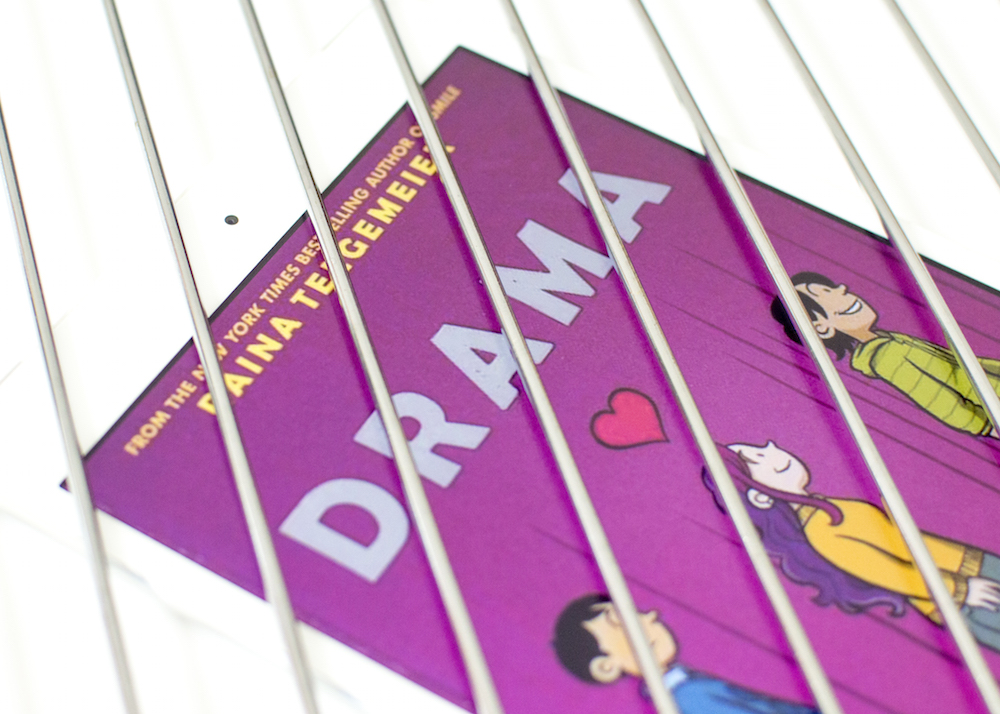 Book Under Review by NLB

Who would’ve thought that I of all people would chance upon a book that is under review by the National Library Board (NLB), Singapore? I certainly didn’t think I would — not after 14 years of patronising the public libraries here and almost always finding what I looked for. Occasionally books weren’t in the catalogue at all and I could guess which themes were potentially “questionable”.

What baffled me was that I couldn’t fathom what it is about Drama by Raina Telgemeier that would necessitate such a course of action. Why is it under review?

Challenged Outside of Singapore

Looking for answers, I turned to Google and found out that Drama by Raina Telgemeier is among the most challenged books in U.S. libraries. Given these circumstances, there’s a whole lot more behind the challenge than I had anticipated. Turns out the grounds of challenge are that it’s “sexually explicit”. This leads me to wonder why Drama was shelved in the Junior (Middle Grade) section at the public libraries.

Had Drama been shelved in the YA section, would it still have come under review? I can’t weigh in much since I’ve not read it yet. I’m not so keen on spoilers either. On the other hand, if they do pull it from the shelves altogether I won’t be able to borrow it. So, dilemma. Anyway, I forged ahead to find out more about this challenge because I was curious.

As I continued searching for reasons while shielding my eyes from excessive spoilers, I found what I expect to be the reason that Drama by Raina Telgemeier is under review:

“Although most readers of all ages found Drama to be just as endearing and authentic as Telgemeier’s other books Smile and Sisters, a small but vocal minority have objected to the inclusion of two gay characters, one of whom shares a chaste on-stage kiss with another boy.”

Will Drama by Raina Telgemeier be Banned?

When books are under review by the NLB, reasons aren’t cited in their catalogue. There’s no set timeline either. That’s why I reserved the book. If it gets re-shelved, I’ll be able to borrow it the moment it’s free for loan again. I’ll be notified then.

Strangely there was a system glitch over the weekend that notified me it’s available for collection. When I wanted to collect it, the librarian on duty couldn’t find it. She called me later to apologise, saying it’s still under review. She couldn’t tell me why and asked if I wanted to continue my reservation even if it might take some time until it’s released, if at all.

Does this mean Drama by Raina Telgemeier will be banned by the NLB? Only time will tell. At the heart of it, this book has been challenged, regardless of whether or not it returns to the library shelves in future.

Update, November 30, 2015: After looking it up in the library’s online catalogue today, I learnt that Drama has returned to the library shelves. It moved from the MG to the YA section.

Did you ever come across a challenged library book?