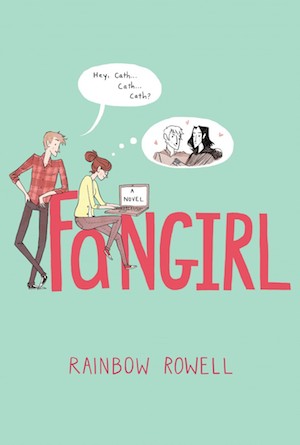 Cath is a Simon Snow fan. Okay, the whole world is a Simon Snow fan, but for Cath, being a fan is her life—and she’s really good at it. She and her twin sister, Wren, ensconced themselves in the Simon Snow series when they were just kids; it’s what got them through their mother leaving.

Reading. Rereading. Hanging out in Simon Snow forums, writing Simon Snow fan fiction, dressing up like the characters for every movie premiere.

Cath’s sister has mostly grown away from fandom, but Cath can’t let go. She doesn’t want to.
Now that they’re going to college, Wren has told Cath she doesn’t want to be roommates. Cath is on her own, completely outside of her comfort zone. She’s got a surly roommate with a charming, always-around boyfriend, a fiction-writing professor who thinks fan fiction is the end of the civilized world, a handsome classmate who only wants to talk about words . . . And she can’t stop worrying about her dad, who’s loving and fragile and has never really been alone.

For Cath, the question is: Can she do this? Can she make it without Wren holding her hand? Is she ready to start living her own life? And does she even want to move on if it means leaving Simon Snow behind?

Fangirl was funny and sweet and wonderful. What I liked best was the college setting without an intense focus on romance. This book was about Cath who tried to find herself, even though she felt she was losing everything. She so desperately tried to hold on to familiarity through her high school boyfriend, her father and most importantly to her, her twin sister Wren. For the first time, she had to be truly independent. I believe that for many, college is the time to find oneself and Rowell presented this transition very well in Fangirl.

Cath continued to pursue her passion in college, even as her sister abandoned it. Cath loved to write fanfiction so much, it practically was her life. It took precedence over everything else, including her studies. Still, Fangirl was also about more than that. It was also about gaining trust in other people like her roommate Reagan and Reagan’s friend, Levi.

The only parts that I didn’t much care for were the stories of Simon Snow, be it the fanfiction or canon. I liked reading about Cath’s feelings and thoughts about Simon Snow but not so much the actual written pieces. They felt came across like a reincarnation of Harry Potter and Twilight combined. Why Rowell wrote a book for publication about Simon Snow is beyond me. Sure, it’s cool when fictional books become reality but I think some books should just remain fictional.

In any case, Fangirl is a book I would definitely recommend for the college-bound. It’s a fairly realistic representation of what happens when young adults leave home. Some people embrace the newfound freedom and go crazy, while some prefer to live in the past or in the very least, their own shells. I liked the contrast between Cath and Wren, which made for a great dynamic. Reagan and Levi were very cool additions to Fangirl as well.