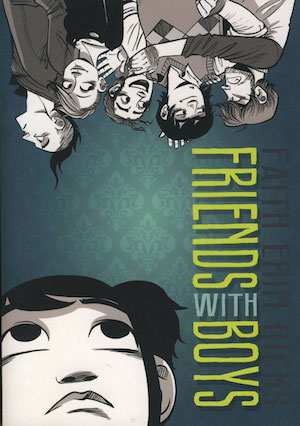 A coming-of-age tale with a spooky twist!

Maggie McKay hardly knows what to do with herself. After an idyllic childhood of homeschooling with her mother and rough-housing with her older brothers, it's time for Maggie to face the outside world, all on her own. But that means facing high school first. And it also means solving the mystery of the melancholy ghost who has silently followed Maggie throughout her entire life. Maybe it even means making a new friend―one who isn't one of her brothers.

Funny, surprising, and tender, Friends with Boys is a pitch perfect YA graphic novel full of spooky supernatural fun.

Friends with Boys Was Nice, but…

For the most part, I enjoyed Friends with Boys but… there are two buts. Firstly, the title is infinitely deceiving. Boys aren’t exactly the focal point. The boys in her life were her brothers. The boy who was a friend wasn’t the focus either. I’d say a more appropriate title would’ve been this: Finally Friends with a Girl. Secondly, where did the ending go to? Quite literally, I thought my copy was missing pages.

While I often go into books blind (i.e. I don’t read synopses) because I hate spoilers, I don’t like being misled either. That title was so off-base, I got confused. I was waiting for the boys that should’ve become Maggie’s friends. They never appeared. Perhaps the title was meant to be Friends with Brothers but the cover was already in print by the time anyone noticed that error? So yeah, I have issues with the title Friends with Boys.

In any case, reading the synopsis does tell you that this book isn’t an ordinary work of contemporary fiction. It has paranormal elements because yes, Maggie is haunted. That part is quite true. There is a ghost and it follows Maggie around.

What I found very odd was the lack of an ending. Friends with Boys doesn’t have a sequel. That’s why I thought it should’ve been imperative to bring the story to a natural conclusion. A cliffhanger would’ve been fine because life isn’t neat either. However, this graphic novel basically ended mid-sentence. Well, no character was actually mid-speech but the end was so abrupt. It was akin to having a rug pulled from beneath you. One moment you’re standing and the next you’re not and there’s not much you can do to reconcile that.

Besides the absence of an appropriate title and ending, Friends with Boys still held its charm. The characters were likeable, which made the glimpse into their lives pleasurable. The dynamics of Maggie and her brothers was a lot of fun to see. Plus, the transition from homeschooling to public schooling must be quite a shock. I liked watching Maggie go through that. I’ve never been homeschooled, though I’ve been the new girl often enough to know how awkward that can be. The anxiety that came with it was presented well in Friends with Boys.