Cue the cheers for Dudette Reads has grown up into Word Revel! I’m mighty excited about this because Dudette Reads was never meant to exist as long as it did. Dudette Reads was a placeholder to get me started. Say, it was an experimental platform of sorts while I figured things out. This means that the move to Word Revel was inevitable, and I’m really happy that the day has finally come.

I think for many of us, our identities are very closely tied to our names. Nicknames we go by shape us on an even deeper level, as our affections are often embedded in them. To some degree, I would say the same is true of our blogs. The names we choose do affect the way we view them. Pride for our blogs starts with the name. If we’re ashamed of the name, we’ll in turn be less fond of our blogs. That is not to say I didn’t like Dudette Reads but it’s not a name that felt representative of me either. I chose it mostly because every other name that came to me last year had already been taken.

Now, why did I go ahead with Dudette Reads then? Well, if I didn’t take it, I knew I would never start. Sometimes things like that build a barrier that we can’t penetrate because we feel that something has to be perfect before we proceed. I’m consistently guilty of that, which is why I convinced myself to forge ahead anyway. Had I waited until I finally came up with Word Revel, then I wouldn’t have had the pleasure of blogging over the past year, so for that, it was worth taking on Dudette Reads.

When I had Word Revel written down on paper, I knew that was it. I finally have a name that resonates with me. It’s short, which makes it punchy and also easier to remember. It still captures the essence of a book blog, while allowing me to expand and blog about other things, should that fancy strike me in future. Besides, who can resist a name that rhymes with rebel? Hah. I kid. Or maybe not. I do like the sound of it. 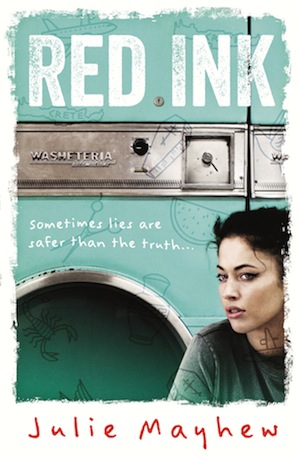 Since I’m in a very celebratory mood, I decided that I want to give away a copy of Red Ink by Julie Mayhew. Prior to blogging, I usually wrote reviews on Goodreads. But after reading Red Ink, I decided I wanted my own space to talk about books. That is how I ended up writing my very first review on the blog.

Red Ink helped me through a low point in my life because it allowed me to escaped into another life, while experiencing the catharsis of it all. Julie Mayhew crafted her characters beautifully, telling her story in a very relatable manner. Evidently, this book is very dear to me, so I would love for more people to read it.