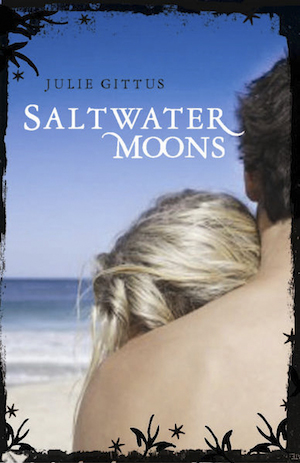 In the beginning it seems so simple. A poem in the mail. A weekend invitation to the coast. But when Sun says yes to a midnight walk, her life becomes suddenly complicated. Saltwater Moons tells the story of Sun Langley during her final months of Year Twelve. There's the intensity of her first relationship, complicated by the fact she continues to exchange poems with her boyfriend's best mate. It's a story about love and betrayal, about constantly longing for the things we can't have.

First off, this book is mad difficult to find. None of my local bookstores sell it and neither do any of the major online retailers because it’s out of print. AbeBooks also doesn’t return any results. As for library systems, according WorldCat, only libraries in Australia, New Zealand and Singapore have Saltwater Moons in their systems. I suppose if you’re really interested in reading this, you could try getting directly in touch with Julie Gittus. Or hope that some random seller lists it on Amazon. I reserved it at my library, so that’s how I got my hands on it.

Saltwater Moons is a very contemplative novel, full of heartache from the beginning right through to the end. What I liked about it is how true to life it is. I think that’s difficult to pull off. As much as realistic fiction carries the label realistic, it’s more about being believable because so many things happen in life that are unbelievable, yet in fiction, readers struggle to suspend their disbelief when such events take place in books.

When I say true to life, I mean that Saltwater Moons is messy. Sun is partly to blame because her choices have consequences but she also is the victim of her circumstances. Take Tycho. He and Sun have such a great connection but for all the best intents in the world, such deep soulful connections don’t always lead anywhere. At least that’s what my own experiences have taught me to believe. This is why I appreciated Tycho, who clearly is a nice guy, yet is so difficult to figure out. Then there’s his mate, Mark. He’s much more forward than Tycho, and clearly has no qualms about taking advantage of others around him. Tycho included. At the same time, he has his family to worry about, so that adds another dimension to his character. And let’s not forget Nicky, Sun’s best friend, who has every reason to be mad at Sun.

Despite all the complications Sun faces in her relationships, Saltwater Moons has a mellow tone. The drama isn’t over the top or in your face. Instead, it is introspective and grounded in lyrical prose, supported by snippets of poetry that Sun and Tycho are so fond of.

Sun’s voice is clear despite her inner turmoil and confusion. I think it’s very fitting of a 17-year-old who seeks independence, all while finding it difficult to justify her own actions. She is rebellion personified when it comes to her parents’ rules, yet is close enough to her mother to talk to her about important issues.

Even though I like the tone and the overarching premise, I wish the plot would’ve had a little more to it. I get that Saltwater Moons is about Sun’s life in Year 12, her thoughts and hopes, but while the relationships had something going for them, the plot basically rose in an even plane. This also affected my own emotional involvement. I only felt a very brief investment once towards the end though it dissolved very quickly. Nonetheless, if you come across a copy of this book, don’t hesitate to pick it up!