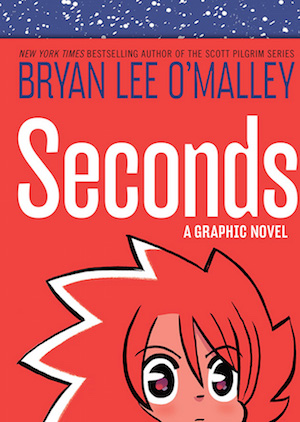 Katie’s got it pretty good. She’s a talented young chef, she runs a successful restaurant, and she has big plans to open an even better one. Then, all at once, progress on the new location bogs down, her charming ex-boyfriend pops up, her fling with another chef goes sour, and her best waitress gets badly hurt. And just like that, Katie’s life goes from pretty good to not so much. What she needs is a second chance. Everybody deserves one, after all—but they don’t come easy. Luckily for Katie, a mysterious girl appears in the middle of the night with simple instructions for a do-it-yourself do-over:

And just like that, all the bad stuff never happened, and Katie is given another chance to get things right. She’s also got a dresser drawer full of magical mushrooms—and an irresistible urge to make her life not just good, but perfect. Too bad it’s against the rules. But Katie doesn’t care about the rules—and she’s about to discover the unintended consequences of the best intentions.

From the mind and pen behind the acclaimed Scott Pilgrim series comes a madcap new tale of existential angst, everyday obstacles, young love, and ancient spirits that’s sharp-witted and tenderhearted, whimsical and wise.

Life choices, second chances and changing the past are major themes in Seconds. That’s why I think it’s a graphic novel that appeals to a wide audience, even if the medium isn’t something one usually reads. It’s natural to wish things had gone differently, lamenting that everything could’ve turned out better, dwelling on the perpetual if only…

In Seconds Katie has the opportunity for a do-over when she finds a magic mushroom. She gets to change something in her past, to correct her mistake and hopefully find herself in a better present. But does she? A shift in the past can have a drastic effect on the future. Katie too learns that lesson in Seconds. Yet she yearns to correct that new mistake. Then she find a lot of mushrooms. Of course she seizes them and makes it her quest to make life perfect.

What she refuses to accept is that there are rules. Rules are there for a reason and rules serve to protect. Katie unleashes mysterious forces upon her universe and the consequences of her actions are dire. The way Seconds is presented and the way greed for a perfect life is explored left me appreciating what I have.

Too often I wonder, what if things had gone differently? What if my family hadn’t moved to this part of the world? What if we would’ve moved to another of the several alternative places? Life would’ve certainly turned out differently for me.

At the end of the day, what matters is what we make of our future. I am who I am today because of my past and its circumstances, if changed would’ve resulted in a very different me. I might have ended up blogging in French, Spanish, Portuguese, Swahili, kept to German or maybe not have come to blog at all.

The main reason I picked up Seconds was that Jade recommended it and when I looked it up I saw that it involved food! Food was really all the reason I needed. Katie’s a chef and aspires to open up her own restaurant. I love books with protagonists that have ambitions and set their hearts on making them happen. That’s were Seconds particularly shone for me.