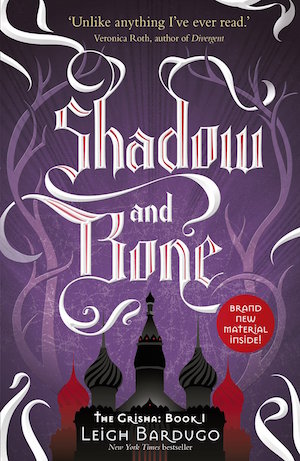 The Shadow Fold, a swathe of impenetrable darkness, crawling with monsters that feast on human flesh, is slowly destroying the once-great nation of Ravka.

Alina, a pale, lonely orphan, discovers a unique power that thrusts her into the lavish world of the kingdom's magical elite – the Grisha. Could she be the key to unravelling the dark fabric of the Shadow Fold and setting Ravka free?

The Darkling, a creature of seductive charm and terrifying power, leader of the Grisha. If Alina is to fulfil her destiny, she must discover how to unlock her gift and face up to her dangerous attraction to him.

But what of Mal, Alina's childhood best friend? As Alina contemplates her dazzling new future, why can't she ever quite forget him?

The best part of Shadow and Bone was the setting. I loved that it was Russian-inspired, which lent the book a fair bit of intrigue for me. When it comes to fantasy, the more imaginative the setting, the better. It offers a lot to work with in terms of world building and invites readers into a new realm.

Sadly, as much as Russian influences were indeed evident, they were inconsistent. When examining the terminology, it becomes evident that the “foreign” words weren’t always Russian but made-up terms. That threw me off a fair bit because while I recognized some of the words and their meanings, I was dumbfounded as to what some of the made-up words were even supposed to refer to. Take kefta. It bothered me that I couldn’t figure out what it was. Turns out, it was a wordplay on kaftan.

That’s why I wish a glossary of some sort would’ve been included to offer readers more clarity since a Russian dictionary alone doesn’t suffice.

All in all, Shadow and Bone was alright. No denying, there were interesting developments throughout the book. Trouble is, the connections lacked finesse. The plot points were so haphazardly connected, there were a lot underdeveloped fillers that made reading feel rather disjointed.

It didn’t help that the writing didn’t impress me. The pacing was off too. Some moments needed more space to breathe and even worse, some moments made me stumble along as I read because they were so awkward. In terms of characterisation, the depth was lacking.

Shadow and Bone would have benefitted from more editing. It is rough around the edges and is so formulaic at its core, it needs further development, or a stronger world building. Adding more complexity to the characters would’ve improved the book a lot more as well.

Despite all my gripes, I enjoyed Shadow and Bone. I liked being transported to a world so different from my own, where good and evil is also very much ambiguous.