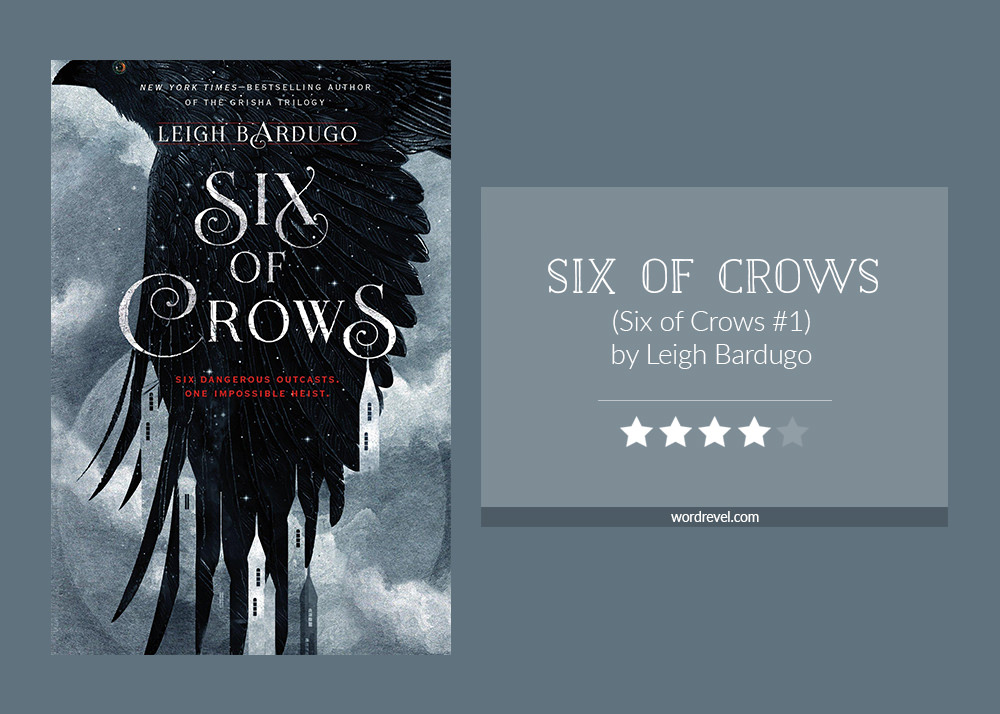 Ketterdam: a bustling hub of international trade where anything can be had for the right price–and no one knows that better than criminal prodigy Kaz Brekker. Kaz is offered a chance at a deadly heist that could make him rich beyond his wildest dreams. But he can’t pull it off alone…

A convict with a thirst for revenge.
A sharpshooter who can’t walk away from a wager.
A runaway with a privileged past.
A spy known as the Wraith.
A Heartrender using her magic to survive the slums.
A thief with a gift for unlikely escapes.

Six dangerous outcasts. One impossible heist. Kaz’s crew is the only thing that might stand between the world and destruction―if they don’t kill each other first.

Six of Crows was an intimidating book to go into. I had problems with Shadow and Bone, and liked the sequels in The Grisha trilogy even less. Needless to say, a spin-off series set in the same world didn’t appeal to me. Thing is, I already owned a copy of Six of Crows (bought it before even reading The Grisha), so I tried to downplay the hype in my mind and dove in. Buddy reading with Crini, Elaine and Sana was an added incentive. What came of it? I actually liked the book quite a lot!

So Much to Love about Six of Crows

At first, the sheer number of characters was overwhelming. It took me some time to adjust and figure out who’s who. Once I did, though, I found myself loving this motley crew. They shone as individuals, had distinct personalities and possessed a “never back down” attitude that drew me to them. The relationships among them were complicated, marred with distrust but still strengthened through necessity. Everyone had secrets, everyone had personal motives, and everyone sought to gain. I loved how unapologetic they all were about these things.

The pacing was on point, speeding up and slowing down to fit each moment. It helped that Bardugo’s writing style improved significantly from her first trilogy. In fact, I couldn’t even recognise the prose as coming from the same author. The Grisha bored me so much, and yet when it came to Six of Crows, I couldn’t get enough. I was chasing the story from beginning to end because I had so much fun. Add the wit and snark that peppered Six of Crows, and I was thoroughly entertained.

Stuff that Still Tripped Me Up

As much as I adored Six of Crows, there were elements that tripped me up in similar fashion to The Grisha trilogy. The setting, Ketterdam, was obviously based on the Dutch city Amsterdam. I couldn’t completely divorce the fantasy world building from reality on that front. It bothered me but I was prepared that I inevitably would because I hated the pseudo Russia that Ravka was in The Grisha.

What also continued to bother me was the mangling of real languages for fantasy ones. Some words were derived from the actual Dutch language, while others were of German origin (which was weird), and then some were simply Dutch-sounding. That inconsistency in constructing a fantasy language unsettled me. It’s a good thing Six of Crows had so much going for it that I didn’t end up dwelling all too much.