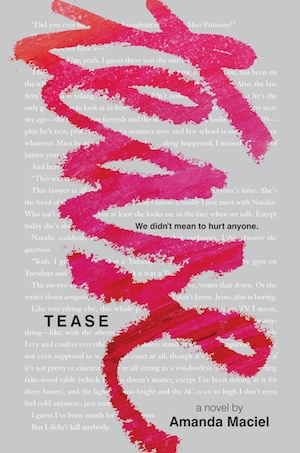 Emma Putnam is dead, and it's all Sara Wharton's fault.

At least, that's what everyone seems to think. Sara, along with her best friend and three other classmates, has been criminally charged for the bullying and harassment that led to Emma's shocking suicide. Now Sara is the one who's ostracized, already guilty according to her peers, the community, and the media.

During the summer before her senior year, in between meetings with lawyers and a court-recommended therapist, Sara is forced to reflect on the events that brought her to this moment—and ultimately consider her role in an undeniable tragedy. And she'll have to find a way to move forward, even when it feels like her own life is over.

In this powerful debut novel inspired by real-life events, Amanda Maciel weaves a narrative of high school life as complex and heartbreaking as it is familiar: a story of everyday jealousies and resentments, misunderstandings and desires. Tease is a thought-provoking must-read that will haunt readers long after the last page.

Some might find it difficult to read a book about bullying from the perspective of the one who bullied. That is exactly the perspective that Tease offers. It is not a book that can be taken lightly. Neither is it a book about a victim of bullying who overcomes her plight. No, it is a story about the bully after her victim committed suicide.

What makes it so difficult to read is that Sara’s reaction is not remorse. Instead, she thinks about all the ways that Emma’s death messed up her own life. She is fixated on her belief that she shouldn’t have been singled out for the lawsuit. Others were just as guilty of the harm that had been inflicted upon Emma. Most importantly, she didn’t kill Emma. Emma took her own life.

As much as many readers like to be able to sympathise with characters in books, Sara doesn’t fulfil that ideal. She challenges it. That doesn’t mean that Tease glorifies bullying in any way though. The consequences are evident. What it does is explore why anyone would resort to bullying in the first place and what their mindset might be like.

We May not Be Bullies but we Aren’t above Them

Most of us, I’m sure, have been guilty of doing something wrong that we didn’t initially think was wrong. We only came to terms with that in retrospect. That is the crossroads that we find Sara at. I liked that Maciel alternated between the present and the past. It portrays the contrast of Sara’s thoughts very well, in terms of before and after, and how she deals with all the hostility towards her as a result of the tragedy.

As I said, Sara’s story hasn’t been written to create another character for readers to love. Amanda Maciel wrote in her author’s note that she believes every story deserves to be heard, and I agree with her. No matter how much I wanted to shake Sara, I thought it was refreshing to consider bullying from the bully’s view for a change. Maciel did a remarkable job writing Sara’s story, wonderfully capturing the nuances of Sara’s thoughts and emotions.

My Experience with Bullying

On a personal note, I don’t think that Tease is a book to which anyone should take offence. I was bullied so much in high school, I transferred schools. Officially, I did it to gain an academic advantage but bullying was the tipping point. This is why I think I am in a position to say, give Tease a chance. I don’t condone Sara’s actions but I do know that often bullies are grossly misguided and they need as much help as their victims do.