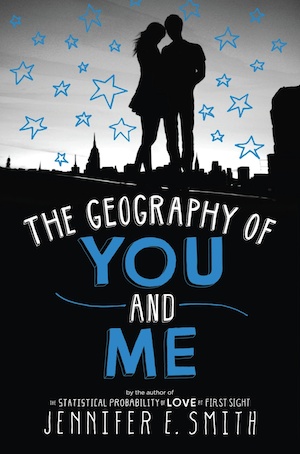 The Geography of You and Me by Jennifer E. Smith • contains 352 pages • published April 15, 2014 by Little, Brown and Company, Poppy • classified as Contemporary, Romance, Young Adult • obtained through NetGalley • read as eARC • shelve on Goodreads

Lucy and Owen meet somewhere between the tenth and eleventh floors of a New York City apartment building, on an elevator rendered useless by a citywide blackout. After they're rescued, they spend a single night together, wandering the darkened streets and marveling at the rare appearance of stars above Manhattan. But once the power is restored, so is reality. Lucy soon moves to Edinburgh with her parents, while Owen heads out west with his father.

Lucy and Owen's relationship plays out across the globe as they stay in touch through postcards, occasional e-mails, and — finally — a reunion in the city where they first met.

When I finished reading The Geography of You and Me, I wasn’t terribly impacted but I could appreciate the good parts of the book. The thing about life is that a lot of experiences are so outrageous, we’d be in utter disbelief were we to read about them in a book.

Jennifer E. Smith cast probability aside and started off her story with a a city-wide blackout in New York. The sequence of events — plausible? Not particularly. In fact, highly improbable. That didn’t deter Smith.

To tip the scales of improbability, Lucy and Owen met when they were trapped together in the lift of the building they both lived in and then were trapped again in another lift later in the story. It’s these tales that pull readers out of the mundane everyday life into situations that happen against the odds.

Moments like these make stories worth telling. Just as fate would bring Lucy and Owen together, faith pulled them apart as they each embarked on journeys, separated by the Atlantic Ocean. I think anyone who has ever been separated from their loved ones will appreciate that distance upon which a large part of The Geography of You and Me was built.

On the whole, I think the best part of The Geography of You and Me was the plot — the ups and downs combined with the travels Lucy and Owen were on. The plot absorbed me into the book, so I kept reading.

I particularly liked reading about Lucy’s time in Edingburgh. Perhaps because I can identify with trying to build a life in a foreign country. Owen on the other hand left me emotionally detached. I found myself skimming a lot of the pages that he dominated. In part, that might have been also because road trips rarely hold my interest.

What baffled me a little was the supposed relationship that Lucy and Owen managed to develop during all this time apart. They didn’t spend all that much time to begin with from their first encounter until they had to part ways again.

The claims that The Geography of You and Me is about a long-distance relationship didn’t hold much water, in my opinion. During the time that they were apart, I didn’t see much of a developing relationship. I saw two teenagers getting on with their own lives, worrying about their own problems. In the end I was much more interested in them building relationships with the people they did get to spend time with.

Defining what Lucy and Owen had as a long-distance relationship comes across as naïvety to me. Then again, what was I when I was 16 years old but a naïve idealist? At least The Geography of You and Me lived up to the geography bit of the title.