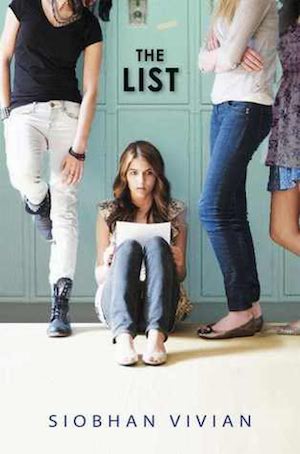 An intense look at the rules of high school attraction—and the price that's paid for them.

It happens every year. A list is posted, and one girl from each grade is chosen as the prettiest, and another is chosen as the ugliest. Nobody knows who makes the list. It almost doesn't matter. The damage is done the minute it goes up.

This is the story of eight girls, freshman to senior, “pretty” and “ugly.” And it's also the story of how we see ourselves, and how other people see us, and the tangled connection of the two.

There are a whole lot of main characters to keep track of in The List! Eight of them, to be exact. At least the narrative is in third person. That gives it a semblance of consistency, even though it still felt like I was juggling eight points-of-view as I read the book. At 332 pages, each character averages 40 pages, unless their paths overlap, which doesn’t happen all that much because they all hail from different social circles.

The four prettiest and the four ugliest girls, a pair from each grade at Washington High are declared with the list at the beginning of every year. These are the eight that make up the main characters in The List. They reactions are documented, and a semi-mystery unfolds as rumours spread about who constructed the list that year. Was it the prettiest senior? A lot of students seem to think so. It does basically guarantee her the homecoming crown. Why would anyone be so cruel and place the ugliest senior on the list for the fourth year in a row?

With so many characters to keep track off, I think what comes to matter more are the attitudes that surface and the underlying principles with which people approach beauty and ugliness. Siobhan Vivian set up a thought experiment of sorts, presenting how these ideas affect girls. What it means when others see them as ugly, and how it affects them. How being seen as beautiful isn’t necessarily a blessing either. She also considers bullying, the varying forms of it and the hurt that it causes.

The List is an interesting exploration of high school relationships, the driver of friendships, and the shallowness that perceptions of beauty supports, all while creating depth as she looks at the underlying issues as well, such as anorexia, low self-esteem and trust.

As much as I liked what The List was trying to achieve, I felt that it was trying to accomplish too much for a book. That gave rise to a lot of unresolved plot points. It also made The List come across as more of an anthology of the immediate consequences of that list but nothing more. The characters too were unresolved somehow. Even though they each had depth, they just couldn’t be developed enough for a novel.

On a side note, reading The List somehow gave me the impression that it was a partial blueprint for the series Burn for Burn. High school drama, multiple characters, everyone embroiled in some kind of mystery, where suspicion jumps from one person to the next, ending up with the most unexpected and innocent-looking person… But maybe that’s just me.