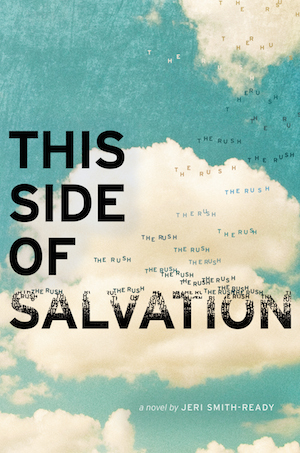 Everyone mourns differently. When his older brother was killed, David got angry. As in, fist-meets-someone-else’s-face furious. But his parents? They got religious. David’s still figuring out his relationship with a higher power, but there’s one thing he does know for sure: The closer he gets to new-girl Bailey, the better, brighter, happier, more he feels.

Then his parents start cutting all their worldly ties to prepare for the Rush, the divine moment when the faithful will be whisked off to Heaven…and they want David to do the same. David’s torn. There’s a big difference between living in the moment and giving up his best friend, varsity baseball, and Bailey—especially Bailey—in hope of salvation.

But when he comes home late from prom, and late for the Rush, to find that his parents have vanished, David is in more trouble than he ever could have imagined…

This Side of Salvation had a lot going for it. Sports, school, religion and romance — all things that are important to a sixteen-year-old. David had a bright future ahead of him in baseball. He trained just as hard for it off-season as he did during his seasons. College scouts were on the look-out for him and his high school coach had taught David all he could.

Homeschooling put David and his sister Mara ahead of their peers, so they attended courses at their community college. Romance-wise, David had Bailey’s attention, so on the whole, David’s life was going great. Except, he had lost his brother John, which cast a huge blanket of grief on his family. David lashed out at God, questioning why John had to die. His parents on the other hand, became more zealous.

Their zeal landed them in the midst of a group of people who claimed that the Rush was imminent. They refused to refer to it as the rapture because so many ministers had predicted the date and failed. This time was going to be different, they believed. Except, David believed the words of the Bible and that was that the end of the world couldn’t be predicted. Mara didn’t even believe at all.

At the core of This Side of Salvation lay the search for and the grappling with faith and beliefs. Faith tore David’s family apart, yet faith was what kept them going as individuals. I liked the exploration of differing beliefs within their family. It was interesting to read how David and Mara dealt with their parents and how religion could have such a strong effect on their lives.

Despite my interest in the religious aspects of This Side of Salvation, it took me quite some time to read the book. The alternating settings between “now” and the past that led up to the Rush were cumbersome to read. I prefer linear time frames. It was even worse when the “now” was riddled with David’s reveries. Personally, I don’t think the alternating settings anything to the story. It only hampered my reading.

Things got worse for me towards the end. You would think that a book that was such a slow reading would have an equally long-drawn resolution. That was not the case at all. This Side of Salvation ended extremely abruptly. For all the 368 pages, less than 30 pages offered up any form of explanation for the events that had been laid out in extensive detail beforehand. It left such a damper for me at the end, my very last sentiment was annoyance. Pity, for This Side of Salvation dealt with very well with the representation of a cult versus the church.