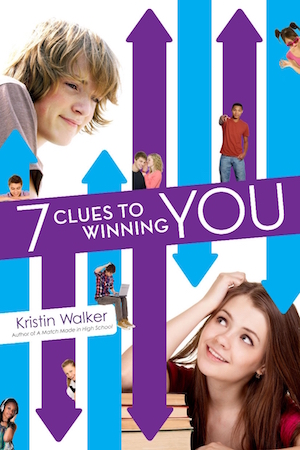 When a humiliating picture of Blythe goes viral, she’s instantly the target of ridicule at her new school. To salvage her reputation, Blythe teams up with Luke to win the Senior Scramble scavenger hunt. But Luke is an unlikely ally and potentially can’t be trusted.

Perhaps it’s his Shakespearean witticisms that reel Blythe in despite her better judgment . . . or maybe she just craves the thrill of the game. But as the hunt progresses, their relationship heats up. Soon their madcap mischief spirals out of control. Blythe is faced with arrest and expulsion, among other catastrophes – until Luke shows her what the Scramble (and love) is really about.

Don’t be fooled by the cover of 7 Clues to Winning You. Looking at it made me think the book was gonna be some sad and sappy teenage romance but it’s not. Yes, there is romance but it’s not sappy or annoying. On the whole, I thought it was rather humorous and I appreciated the wit.

Even though Blythe transferred to Ash Grove, she made an effort to maintain her friendships from Meriton. After all, they still lived in neighbouring districts. The portrayal of their increasingly strained relations was realistic since their lives came to be revolved around different social circles.

It’s always tough being the new kid in school. It’s even tougher when it’s half-way through the year. Blythe has it even worse than that though. Not only does she have to transfer in the middle of the school year, but her notoriety precedes her. She is the principal’s daughter and a humiliating picture of her had been an object of ridicule at her new school. To top it off, Blythe convinces her father to ban the Senior Scramble, so she becomes the most hated person at her new school.

In a bid to save her reputation, Blythe teams up with a senior, Luke, to run the scavenger hunt underground. They have to do so at their own risk though because if they are caught, they will be suspended. But that only adds to the thrill of it all.

What I particularly liked about 7 Clues to Winning You was Blythe’s volunteer work at the nursing home. She was especially attached to Ms Franny and Ms Eulalie. The two of them alone made the book for me. Their characters were hilarious and I could totally picture every scene with them.

Nonetheless, I did enjoy reading this book and it did leave me with some lasting sentiments:

“Why had I ever cared about happy endings? Happy beginnings were so much better.”