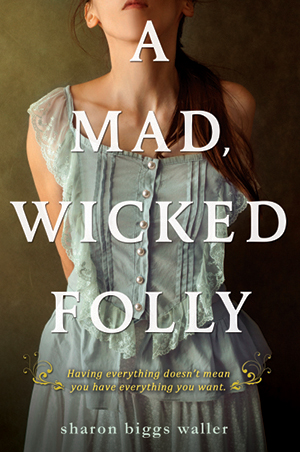 Welcome to the world of the fabulously wealthy in London, 1909, where dresses and houses are overwhelmingly opulent, social class means everything, and women are taught to be nothing more than wives and mothers. Into this world comes seventeen-year-old Victoria Darling, who wants only to be an artist — a nearly impossible dream for a girl. After Vicky poses nude for her illicit art class, she is expelled from her French finishing school. Shamed and scandalized, her parents try to marry her off to the wealthy Edmund Carrick-Humphrey. But Vicky has other things on her mind: her clandestine application to the Royal College of Art; her participation in the suffragette movement; and her growing attraction to a working-class boy who may be her muse — or may be the love of her life. As the world of debutante balls, corsets, and high society obligations closes in around her, Vicky must figure out: just how much is she willing to sacrifice to pursue her dreams?

I absolutely adored A Mad, Wicked Folly. It is hands down the favourite book of mine thus far this year. The Edwardian setting of Trouville, France, followed predominantly by London was glorious. There was such a great mix between history and fiction, I felt like I could see myself as an observer right there by Vicky’s side; at the same time, immersing myself in stunning storytelling. Victoria Darling could be such an impossible main character — rather naïve, really — and yet I found myself caring a great deal for her plight.

Art is one of those things that makes me love a book. It’s an element, much like music, that adds vividness and life to books. Reading about Vicky’s passion for it made it burn right within me too. The difficulty lay in balancing that passion with other responsibilities in life, especially as a woman.

Caught in the Suffragette Movement

Feminism today is seen by many as a derogatory term. Personally, I don’t understand this. Feminism is a call for equality and yet for some reason there’s this mistaken notion that it stems from the desire of women to usurp men. Then there are those who take this equality for granted. This is why portraying the turbulence of the suffragette movement in A Mad, Wicked Folly was so important to the book. It’s something that needs be told and something that shouldn’t be forgotten.

The equality of women vis-à-vis men didn’t come so easily as just about a century ago it was the norm that a woman should marry and submit herself to her husband. Yet there were women who fought that tradition and broke away from their families to build their own lives.

The internal conflict that Vicky embodied reflects that of many women today. On one hand, they try to distance themselves from feminism while on the other, they want to pursue their own goals. Despite the historical setting, Vicky was a splendid example of that. She didn’t want to identify with the suffragettes, lest she completely destroy her family’s reputation. Yet all she wanted of herself was to be an artist. She had no interest in taking care of the affairs of an upper class household, calling in to visit others of the same stature, hosting tea parties and keeping up appearances.

Besides art, Vicky also was conflicted when it came to agreeing to an arranged marriage and allowing herself to follow her heart. The idea of love greatly enamoured her but amidst repairing her own reputation and pursuing her dreams, she didn’t know how love could ever factor into her life. All these conflicts seemed so foreign yet familiar to me, which made A Mad, Wicked Folly a very compelling read.

Siblings Above All Else

Frederick, oh Frederick. He was the cherry on top. Without him A Mad, Wicked Folly would’ve been a good book. With him it was perfect. As the elder brother of Vicky, he had his own experiences that mirrored hers. That made the contrast between a son and a daughter in their era very evident. Neither had an inclination towards their father’s wishes. Both were at his mercy. He however eventually regained his father’s respect. She didn’t even receive so much as a glance from her father when she went against his wishes.

That’s where the relationship of these two siblings shone. Frederick fully understood his sister and was the one ardent supporter of Vicky. He helped her wherever he could while letting her make her own decisions, regardless of whether or not he agreed with her. He didn’t try to put her in her place. Instead he loved and helped his sister as much as he could. In fact, he didn’t allow her to second-guess herself merely because she was a woman.

The linguistic style of the prose set the tone as it was more old-fashioned. What I liked about it was that Sharon Biggs Waller still managed to make it accessible to the modern reader. She chose expressions that while not entirely common anymore still weren’t too alien either.

The interactions were also a slight bit more formal between everyone, contrasting the familiarity between Vicky and her maid for instance, with whom Vicky insisted on forgoing decorum. Behind her mother’s back Vicky allowed her maid to address her with her first name rather than surname. This showed the heart and the desire for equality that Vicky had, even if the suffragette movement originally wasn’t her life’s cause.

I’ve tried to keep my review organised and yet I feel like I’m all over the place. My love for A Mad, Wicked Folly engulfed all logical thought — the main reason it’s taken me so long to sit down type out my book review. Really, at the end of the day, what I want to say is, Read this book!