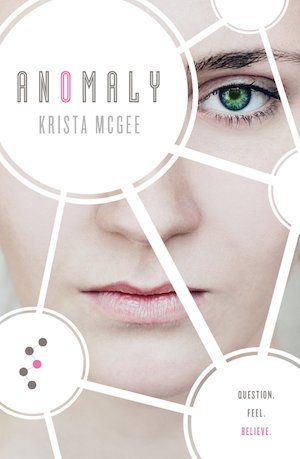 Thalli has fifteen minutes and twenty-three seconds left to live. The toxic gas that will complete her annihilation is invading her bloodstream. But she is not afraid.

Thalli is different than others in The State. She feels things. She asks questions. And in the State, this is not tolerated. The Ten scientists who survived the nuclear war that destroyed the world above believe that emotion was at the core of what went wrong—and they have genetically removed it from the citizens they have since created. Thalli has kept her malformation secret from those who have monitored her for most of her life, but when she receives an ancient piece of music to record as her community’s assigned musician, she can no longer keep her emotions secreted away.

Seen as a threat to the harmony of her Pod, Thalli is taken to the Scientists for immediate annihilation. But before that can happen, Berk—her former Pod mate who is being groomed as a Scientist—steps in and persuades the Scientists to keep Thalli alive as a test subject.

The more time she spends in the Scientist’s Pod, the clearer it becomes that things are not as simple as she was programmed to believe. She hears stories of a Designer—stories that fill her mind with more questions: Who can she trust? What is this emotion called love? And what if she isn’t just an anomaly, but part of a greater design?

Anomaly contains everything a reader expects in a good story. A protagonist, a hero, a plot with highs and lows, problems that need to be solved and an unexpected twist.

Thalli knows she is different; she has known for a long time. She is also aware that being different is dangerous, so she hides it as best as she can. Hiding is becoming increasingly difficult though, especially when she player her music. She is her Pod’s designated musician but music is supposed to serve a specific purpose and that is to stimulate productivity of other Pod members.

Yet she can’t help but feel that there is so much more to music. She feels things through her music, even though she knows she shouldn’t. When she can no longer contain herself, and she is determined to be a threat to the rest of her Pod, she is removed to be annihilated.

Instead of impending annihilation, she becomes a science experiment because Berk, her former Pod mate and friend, who is in training to become a Scientist, manages to convince the Scientists to preserve her life. That decision is not indefinite but it gives Berk time to figure out how to save Thalli. It is from this point onwards that things become interesting.

What is humanity without emotion? Readers come to see what it must be like to learn about emotion for the first time. Happiness, anger, sadness, etc. are so integral to our lives that we rarely stop to think what life would be like if it were entirely rational. This whole concept in itself intrigued me and it is that which first drew me to this book. Also, I can rarely resist books in which music is integral, so it was a bonus when I read about Thalli’s role as a Musician and how she would lose herself in music.

While I had no problems with the outright religious messages weaved into the story, I do think it’s important to note that it very clearly is a book of Christian narrative fiction. Some readers may not appreciate this but the quest for the Designer is part of what propels the plot forward. It is also what gives Thalli glimpses of a greater purpose. It also added another facet to the discoveries of what life on earth was like before the nuclear war that wiped out most everyone besides the Scientists who managed to establish The State and save themselves.

Without including any spoilers, I did have a problem with the ending. Despite tying up the most immediate lose ends, it only doubled the questions for me. Granted, it was written to set up for the sequel, and it is there where more answers will be found but it bothers me when twists are so drastic, they’re almost disjointed from the preceding parts. Ignoring the end though, I did think it was a pleasant read with enough fresh ideas to be different from the other dystopian books I’ve read of late.