Literally is a website/ app that allows users to track books. Wait! Another book site?! you ask? Well, after some googling, these were the bookish sites that popped up for me:

That’s 13 of them. A number of websites shut down, so those are the ones that are standing today. 14, counting Literally. That’s not that many bookish sites, if you ask me. Then again, I don’t need 14 websites to track my reading. I reckon nobody does.

Over the past few years, I’ve tried some of the available options out there. I joined Shelfari in 2008 but shut down my account last year because I decided Goodreads was enough. I tinkered with LibraryThing for a bit but didn’t like it much. In 2009 I tried aNobii because I was looking for something with a viable mobile app. I didn’t last long on aNobii either. I’ve a Bookish account but I don’t log in.

As for the ones that I’ve not yet given up on, there are BookLikes and ThirdScribe. BookLikes is kind of a cross between book cataloguing and Tumblr. All well and good but I already have my blogging space carved out with my own domain, so I’m a little hard pressed when it comes to fully making use of BookLikes. As for ThirdScribe, I’m hanging around until things get exciting or at least until I figure out how to use the site.

The Heart of Literally

So back to Literally. I’ve decided that I’ll continue using it. See, the uses for it aren’t as ambiguous as with websites that try to compete with Goodreads or LibraryThing. Thankfully, that’s not what Literally is trying to do. Sure, there are the default shelves: Reading, To Be Read, Finished, oh and Did Not Finish. Hah. But cataloguing is not the heart of Literally. Reading is. Literally is more about tracking your reading progress and finding your next book to read.

What Literally Has to Offer

The first thing I see after logging in is my dashboard. This is where I keep track of the books I’m currently reading as I update the number of pages I’ve read.

The dashboard also features all the badges I’ve earned so far and also a graph showing my reading progress of the week. The badges are pretty neat. They’re nicely designed and encourage greater engagement with the site.

Spy that moustache? Yep. I’m a certified hipster because I was one of the first 100 users to sign up. Incentive right there for me not to jump ship.

There are some social features as well, so all users have their own profiles. Although, despite the option for status updates, I’m not sure what they’re good for because as of now, there is no integrated timeline. Maybe that’s for the future. Either way, profiles are the more public spaces on Literally for users to access.

Now, what sets Literally apart is how the site deals with upcoming reads. Under the Books menu, users are challenged to tackle their TBR lists, can ask for book recommendations from friends, or simply search for books that they might want to read.

What intrigues me are the TBR Challenge and book recommendations from friends. The TBR Challenge basically battles books I intend to read against each other. All I have to do is to keep picking one book between two options until I’ve found a book I want to read. 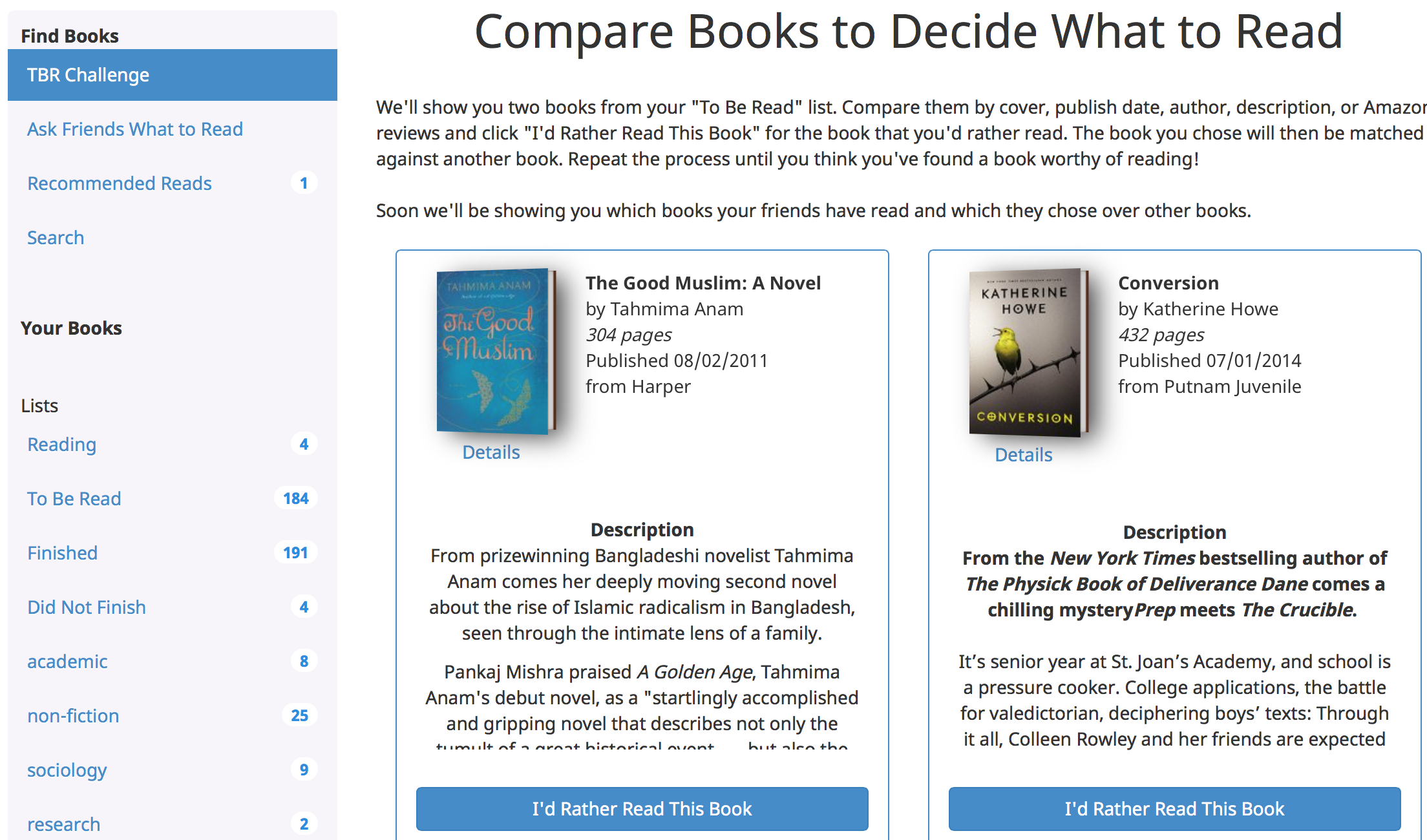 If no titles seem to appeal to me or I’m in the mood for something but don’t know what book can address that mood, I can submit a recommendation request instead, which will be sent to all my friends on Literally. After I’ve submitted my request, I sit back and wait for the recommendations to come in. I think that’s a great feature because that way recommendations are tailored to fit the users.

That’s it for now in terms of functionality of the site itself. It is still in beta, so not everything has been introduced yet and there still are bugs that need to be addressed. Nonetheless, I think Literally is pretty neat already. I think the appeal of Literally definitely is in the simplicity and in the focus on reading, rather than books specifically.

Users cannot rate books and cannot review them either. Ratings and reviews are pulled from Amazon and displayed with all the books’ information though, so choosing books to read isn’t a blind process.

The Near Future for Literally

Looking at what Literally has in store, there are a few exciting things lined up. One thing many are bound to appreciate will be the deals section. The plan is to notify users when prices of books on their TBR shelves drop below a certain amount they’re willing to pay for books. I think this is going to be a major draw towards Literally.

What I most look forward to is the mobile app. Updating my reading progress is something of a side activity, so I don’t switch on my laptop if that’s all I want to do. Going mobile means I’ll definitely use it a lot more actively than I have the past couple of months. Literally announced that the test versions of the mobile app will be released this weekend, so that’s something I’m looking forward to.

Have you tried Literally yet? How’re you liking it so far?

If you’re not a Literally user yet but want to be, I have one invite code to give away. Just mention in the comments that you want it, and I’ll email it to you. If there are several readers who want the code, I will draw lots on 6. April at 12 noon (GMT).