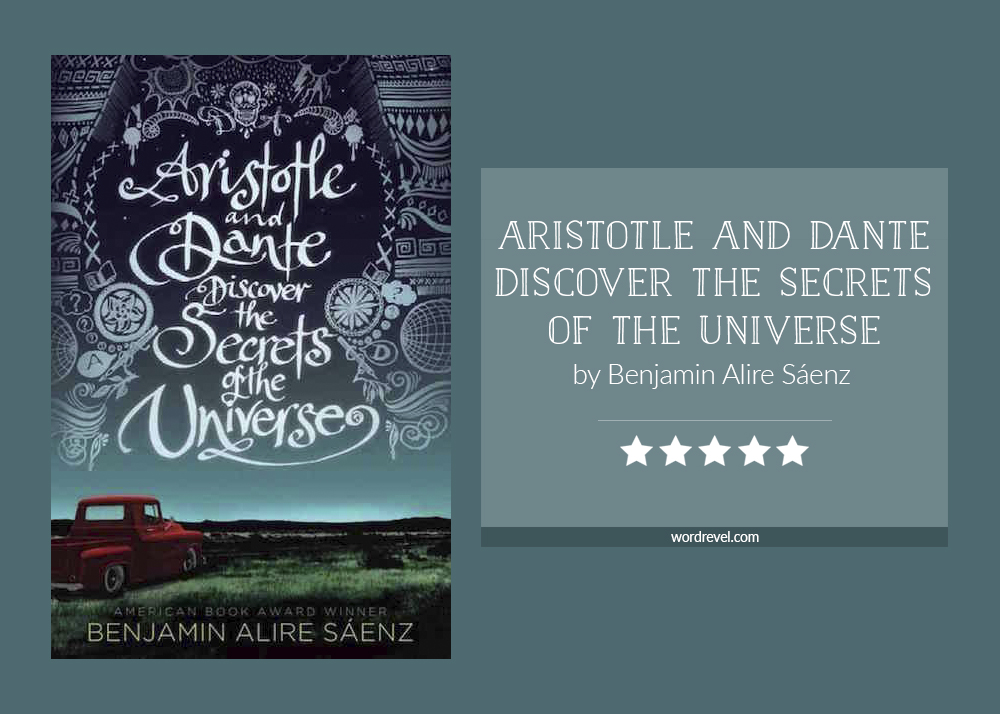 Aristotle is an angry teen with a brother in prison. Dante is a know-it-all who has an unusual way of looking at the world. When the two meet at the swimming pool, they seem to have nothing in common. But as the loners start spending time together, they discover that they share a special friendship—the kind that changes lives and lasts a lifetime. And it is through this friendship that Ari and Dante will learn the most important truths about themselves and the kind of people they want to be.

Aristotle and Dante Discover the Secrets of the Universe was beautiful! I’ve had the hardcover on my bookshelves for over two years. I also knew that Lin-Manuel Miranda was an excellent narrator. But the more people told me to read it, the more I put it off. Yes, I blame my irrational brain. I wanted to read it but then I refused because others encouraged me to. Thankfully, Hazel picked it for our June Epic Recs, so I couldn’t deny her pick. I went on to alternate between print and audio.

I adored the prose. It flowed so well from the beginning right to the end. I felt like I really got into Ari’s head. His emotions, his thoughts, were very well encapsulated. No words were wasted and yet they managed to convey a multitude of meanings. That, my friends, is literature at its very best. This book touched me, and I know it is one I will surely re-read in future.

Short alternating lines were employed very powerfully as well. These exchanges between Ari and Dante showed such intensity and understanding between the two.

In contrast, clipped exchanges between Ari and his father demonstrated the strained relationship they had. Ari wanted to know what lay behind his father’s hardened façade brought on by the Vietnam War. His father however, kept everything inside of him.

If anything, Sáenz truly understands the crafts of writing and storytelling. Anyone who scoffs at young adult novels, deriding them as books simplified for youngsters, hasn’t experienced gems like these.

As much as I enjoy action with highs and lows to engage the reader, I live for introspective books. Aristotle and Dante Discover the Secrets of the Universe is a perfect example of that.

Some day all the clues would come together. And I would solve the mystery of my father.

Some of his musings filled the time between more significant events — such as when he was walking home:

I thought about birds and the meaning of their existence. Dante had an answer. I didn’t. I didn’t have any idea as to why birds existed. I’d never even asked myself the question.

Dante’s answer made sense to me. If we studied birds, maybe we could learn to be free? I think that’s what he was saying. I had a philosopher’s name. What was my answer? Why didn’t I have an answer?

These little moments added so many layers to the character of Ari. They added nuances that pure actions couldn’t have conveyed. That is why introspection is something I always appreciate, especially when coupled with observations from the protagonist’s perspectives.

Another important aspect of Aristotle & Dante was the reflection on what it meant to be Mexican. They considered cultural practices in their everyday lives. This is something I can definitely relate to, being of German & Filipino descent while living in Singapore.

Just the other day, my dad asked me what we should gift a family friend on his wedding day. Do we go with his home country’s or local practice or do we factor in his fiancée’s ethnic upbringing? But I digress. Here’s an example from the book:

“Yeah,” I said, “but we’re not Japanese. We’re Mexican.”
“We’re not really Mexicans. Do we live in Mexico?”
“But that’s where our grandparents came from.”
“Okay, okay. But do we actually know anything about Mexico?”
“We speak Spanish.”
“Not that good.”

These conversations are so important in navigating culture. These matter in developing one’s identity, particularly when growing up in a different country. I’m so glad that Ari & Dante grappled with these issues.

Some friendships form as a matter of circumstance and convenience. Others are built intentionally. Dante forced himself into Ari’s life. That gave rise to a very special bond, which I found myself highly invested in.

Even the most mundane chapters that recounted nothing more than random conversations mattered. They showed glimpses of what it meant for Ari and Dante to be friends. At the same time, their friendship went through trials that had me biting my lips as I read on.

There came a moment that I was livid. Livid at what happened. View Spoiler »Livid at hate crimes against homosexuals, and anyone else. « Hide Spoiler Livid that their world was a reflection of the world we still live in today. That’s why I came to love Ari all the more, for the justice that he sought in everything.