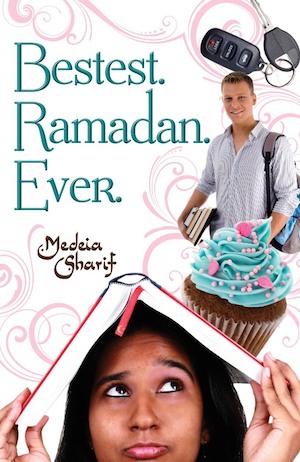 No pizza. No boyfriend. (No life.)

Okay, so during Ramadan, we're not allowed to eat from sunrise to sunset. For one whole month. My family does this every year, even though I've been to a mosque exactly twice in my life. And it's true, I could stand to lose a few pounds. (Sadly, my mom's hotness skipped a generation.) But is starvation really an acceptable method? I think not.Even worse, my oppressive parents forbid me to date. This is just cruel and wrong. Especially since Peter, a cute and crushable artist, might be my soul mate. Figures my bestest friend Lisa likes him, too. To top it off, there's a new Muslim girl in school who struts around in super-short skirts, commanding every boy's attention—including Peter's. How can I get him to notice me? And will I ever figure out how to be Muslim and American?

In light of Ramadan, it seemed fitting to finally pick up Bestest. Ramadan. Ever. With the pink swirls on the cover, the depiction of a guy and a girl together with that pastel-creamed cupcake, I expected a feel-good kind of book. What I did not expect was a load of fluff to boot. Perhaps the title should have tipped me off. I mean, “bestest”! Really? When I first saw this book at the library a few months ago, I didn’t pick it up precisely because of that. I should have left this book on the shelf. Yet, I am often drawn to seasonally fitting books, so I read it anyway, telling myself I needed a light read after delving into more science fiction of late than I usually do.

I have not come across many YA books specifically written about multiculturalism, so Medeia Sharif evidently contributed to filling that void. Almira’s life is a balancing act, bordering on a double life, as she tries to come to terms with her Middle Eastern roots whilst in America. Her struggle is a very real one because Muslims are a lot more conservative than Americans in general.

It’s only natural then that Almira should be pining after a boyfriend, even though she knows that if she does date someone, she will have to keep it secret from her family because her parents do not permit her to date anyone. At the same time, being raised in America, “the land of freedom”, means that her family is more liberal than if they would have stayed in the Middle East. Almira is not expected to wear a hijab (headscarf) or cover her arms to her wrists and her legs to her ankles. She dresses and talks like her peers, many of whom were Hispanic. In that aspect, I appreciated what this book attempted to address: the difficulties of staying true to one’s ethnic roots and culture while living in a different one.

Sadly, I have more gripes than praises. Almira is a straight-A student and her teachers agree that she is extremely intelligent. I didn’t see that. Sure, she was smarter than her best friend, Lisa, who couldn’t even remember(!) who wrote “The Diary of Anne Frank” which isn’t a work of fiction. Lisa chose it for a book report, and it seemed that she had already read it previously, so she must’ve been pretty dumb for someone in an honours class. This means that it didn’t take much for Almira to be smarter than Lisa.

Despite her supposed intelligence, she was incredibly shallow. She spent the most part obsessing over Peter and worrying about Lisa chasing him too. Then there was Shakira, the new girl. Almira of all people should have known that there is more to someone than her clothes. After all, her own grandfather referred to most women wearing non-conservative clothing “prostitutes” because he thought wearing mini skirts was a sign of corrupt morality. Still, she dismissed Shakira immediately and didn’t even bother talking to her until circumstances led them to each other.

What bothered me the most was that I expected to read about Almira’s experience of Ramadan. Ramadan however is about more than not eating between sunrise and sundown. It is about strengthening faith and a spiritual exercise. For the most part, Almira was fixated on the abstinence from food. Understandable, seeing how this was the first time she seriously took part in fasting. Beyond that though, there was little mention of her own faith. I didn’t expect soul-searching at that point but I did think it would’ve been important to explore why she so badly wanted to take part in Ramadan.

She had only been to the mosque twice in her life and neither did she have any Muslim friends, so there was no real social pressure besides her parents and grandparents. If their opinions truly did matter that much, then it’s strange that her first full fast only came at the age of 15. Instead, I got the sense that she stuck it out because she realized she could lose weight that way, and also for pride to prove her grandfather wrong because he believed she couldn’t do it. There were brief mentions on how Muslims need to be fully covered when praying and that technically they should pray five times a day, even if Almira didn’t adhere to the prayer times at all.

Readers who wish to find out more about Islam might want to look elsewhere. One stark example for me that misrepresented valid Muslim practice was the mention of nail polish and the stance towards it. Almira was annoyed about the ignorance of another girl who once was astonished that her parents allowed her to wear nail polish. She claimed that Muslims can be fashionable too. That is true. Muslims can be fashionable but the ignorant one was Almira. Pity. Normal nail polish may technically be worn but most be removed completely for prayers because otherwise ablution is not valid. Nail polish is impermeable to water, so nails cannot be cleansed properly for prayers when nail polish worn.

Bestest. Ramadan. Ever. didn’t live up to my expectations. I was disappointed because Ramadan was belittled through the eyes of the main character. Sure, she did not have a strict upbringing, even though it was stricter than that of her friends. Yet, there was no extensive Islamic influence in her life either to be representative of a Muslim growing up in America, trying to practice her faith while in a country that is exceedingly more liberal than her religion allows.

At the end of it I did not think that the question of how to be Muslim and American was answered.