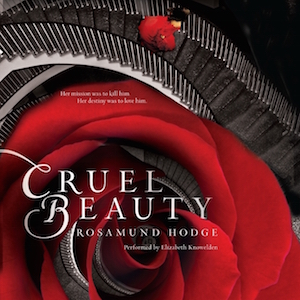 Since birth, Nyx has been betrothed to the evil ruler of her kingdom—all because of a reckless bargain her father struck. And since birth, she has been training to kill him.

Betrayed by her family yet bound to obey, Nyx rails against her fate. Still, on her seventeenth birthday, she abandons everything she's ever known to marry the all-powerful, immortal Ignifex. Her plan? Seduce him, disarm him, and break the nine-hundred-year-old curse he put on her people.

But Ignifex is not what Nyx expected. The strangely charming lord beguiles her, and his castle—a shifting maze of magical rooms—enthralls her. As Nyx searches for a way to free her homeland by uncovering Ignifex's secrets, she finds herself unwillingly drawn to him. But even if she can bring herself to love her sworn enemy, how can she refuse her duty to kill him?

Based on the classic fairy tale Beauty and the Beast, Cruel Beauty is a dazzling love story about our deepest desires and their power to change our destiny.

Searched for an Audiobook Fix

Audiobooks aren’t cheap, so whenever I came across good deals (obviously free is unbeatable), I pounce. When it’s free, it doesn’t matter if it’s a book I would’ve picked up for myself, so long as my interest is piqued. I also listen to audiobooks from my library and Overdrive but the selection is rather limited. So anyway, I wanted to listen to an audiobook and my mood pulled me towards Cruel Beauty out of sheer curiosity.

Treading into the Unknown

Even though I had seen Cruel Beauty floating around everywhere from blogs to Twitter to Instagram, I had zero knowledge of what the book entailed, save for it being a Beauty and the Beast retelling. I wasn’t prepared for the elements of Greek mythology but in the end I didn’t mind them. Occasionally they felt more gimmicky than integral to the story though, so that didn’t convince me all that much.

Throughout the book, I felt somewhat unsettled. I still don’t know why exactly. Maybe the romance made my uneasy or the fairy tale and Greek mythology didn’t bind convincingly. Nonetheless, Cruel Beauty was beautifully written and narrated. It truly was a fairy tale retold. When it comes to splendid writing or narration, I can’t contain myself; even more so when it’s good writing and good narrating combined, like for Cruel Beauty.

The timeless setting was glorious and while the style emulated the fairy tales of olden times, it still felt like a modern story because it was like a fresh and new fairy tale. Sadly, I felt a sort of emptiness after the closing lines and that wasn’t because I was sad the book was over. That, for me, was the cruelty amidst the beauty.