Disclaimer: There are spoilers for the first two books in the series, The Rosie Black Chronicles. If you have not read them yet, you might want to check out the reviews of Genesis (Book #1) and Equinox (Book #2) instead. 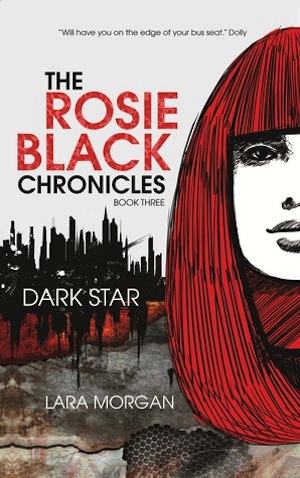 To protect Pip and fulfil her deal with Sulawayo, Rosie Black has joined Helios. But trouble is brewing within the ranks - a rebellion is rising. Who is part of the rebellion? Who is trying to take full control of Helios? How does the mysterious Dark Star fit into these plans?

The stakes are high for Rosie. The survival of Pip and the world as she knows it depends on her. Can Rosie find the truth and save those she loves before it's too late?

After I was done reading Dark Star, I was pretty satisfied with how the trilogy ended. While I didn’t yearn for another book to extend the series, I didn’t wish for less either. Three books for this trilogy was the perfect number to build up the story and to wrap it up in the end.

I liked that Rosie matured over the course of the books, since she did get a year older with each. At the same time, the presence of Aunt Essie and Essie making decisions for Rosie in the absence of her parents made it so much more believable that at the end of the day, Rosie was still a teenager. By the time we hit Dark Star, Rosie is already 18 years old, and with all those adventures behind her, she has also become a whole lot more independent. What made me like her so much was that not once did she derive her worth from another guy. Yes, she cared a lot about Pip and some of her decisions were based on him but whenever that happened, it wasn’t because he directed her choices but rather, she factored him in for his own safety. That, for me, made her very appealing to me as the central heroine of the book.

Now, at the end of Equinox, Rosie turned herself over to Agent Sulawayo to become part of Helios. Sulawayo had previously convinced her that she was leading a rebel faction, so Rosie believed that this was her last resort to bring down Helios. During her time there, she had to be part of their training program, where she met other recruits around her age. Gillian stood out the most and somehow seemed to have Rosie’s back. Still, Rosie couldn’t be sure since she was in enemy territory, so she was wary of Gillian while making friends with her. The introduction of Gillian added the story very well because Rosie after the death of her best friend Julie, she hadn’t found another friend she could rely on. Sure, there were Pip and Dalton but they were guys, so the dynamics were different. With Gillian in the picture, I felt that I got to know Rosie better not just as someone wanting revenge on Helios or as a potential love interest but also as a friend to someone.

All in all, I’d say I really liked Dark Star. Since it is the last book in the series, I suppose a lot of the resolutions were to be expected in order to wrap everything up. Still, there were enough surprises to keep me reading. Plus, I really wanted to know how the problem of the MalX would finally be solved, or if a significant number of people would die before we’d reach the happy ending. Well, I had hoped for a happy ending. Perhaps it’s not as happy, as some might prefer but I think some things were inevitable. Before I give too much away, I’ll stop here with my review. I do have to say though, try to pick up all three books if you can, you won’t regret reading them, especially if you’re on the look out for authors you’ve probably not come across before.