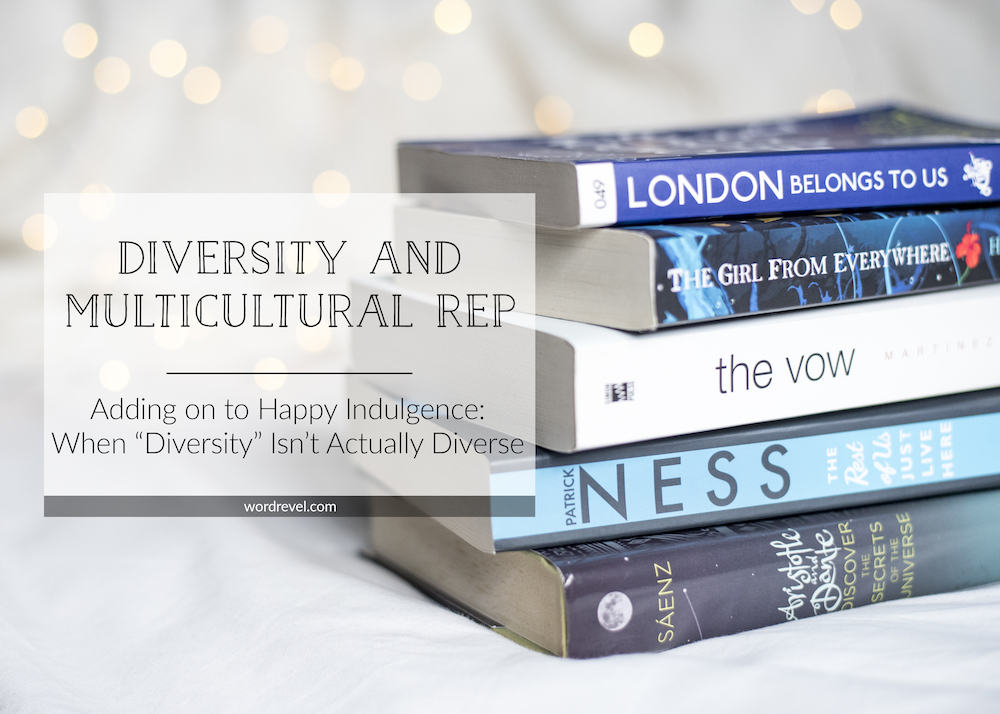 Adding to the Diversity Debates

In light of the ongoing debates on diversity in the book blogosphere, in the book tube community and on bookstagram, Jeann from Happy Indulgence thought it important to talk about when “diversity” isn’t actually diverse. Many of us know that a lot more can be done in YA literature to represent diverse voices.

At the same time, there are some people who oppose the call for diversity either because they don’t see why it should matter — they say the story matters, not the people — or they think diversity is a call for the erasure of the privileged majority. It’s not. When we say, we need diverse books, we ask for inclusivity of all. With that inclusivity, it’s important that it be presented well and not merely for the sake of it.

Now I ask that you head on over to Happy Indulgence and read Jeann’s post. When you’re done, come back here for my thoughts on the lacking representation of mixed ethnicities in YA fiction.

Before I delve into the complex topic of diversity, let me add a note about my cultural background. I’m of multiracial descent, was raised in a bi-ethnic household and have lived abroad most of my life. My family moved around a lot when I was younger until we finally settled in Singapore, a nation that prides itself in its multiracial society. It’s in this context that I voice my opinions today, although I’m sure that others around the world have had similar experiences of their own.

My Experiences as Someone of Multiracial Descent

Being of mixed ethnic descent is something that still confounds many. A common question I face is, “What are you?” While rarely intended to be mean-spirited, the phrasing of the question is hurtful. It insinuates that someone whose race cannot be concretely identified through physical attributes isn’t human, or at least, is a lesser human being. This might seem insignificant but to be asked that almost every time you meet a new person chips away at your self-worth.

Then, when I, in all seriousness, answer, “I’m human,” some apologise and rephrase. Others are embarrassed and mumble that that’s not exactly what they meant. When that’s done, some start questioning the links between my nationality and ethnicity. Some bolder people try to engage me in conversation about the stereotypes surrounding Eurasians locally — rich, nightly clubbing, excessive alcohol, etc. Others tell me I’m a terrible German because I don’t drink beer.

This reality sheds a little light on how misunderstood people who cannot be neatly boxed in are. It’s also an internal struggle of identity. With a Caucasian parent and an Asian one, where do I belong? I’ve proudly claimed both ethnicities. I speak my father’s language and eat my mother’s food. Growing up was doubly tough because when my mother would say, “Yes,” my father would say, “No.” When my father was agreeable to a request, my mother would nix it.

As I said, I am both but sometimes I’m treated as neither nor. Back in secondary school, many thought I wasn’t Asian enough, referring to me as the “white girl”, thereby signifying my exclusion.

When I’m not identified as an ang moh (colloquial term referring to white people; depending on context, also derogatory), I tend to be mistaken for a Malay person, and by extension a Muslim. I am neither. Yet during Ramadan, I’ve had to be careful about eating in public, particularly during my undergrad days. On another occasion, I ordered clam chowder and the service staff was very reluctant to hand me the bowl because the chowder contained bacon.

These are just a few of the many examples I could cite. They demonstrate that culture has a huge impact on individuals. Navigating my own as well as foreign cultures is never easy.

Intricacies on a cultural level, sadly, are hardly represented in YA literature. Yes, The Vow by Jessica Martinez examines what it means to be caught between two countries, and two different cultures. Aristotle and Dante Discover the Universe by Benjamin Alire Sáenz touches a little on what it means to be Mexican while living in the USA. However, such concerns are a rarity.

Granted, I have read a number of newly published books that featured multiracial characters over the past year. Notable ones include The Girl from Everywhere by Heidi Heilig, London Belongs to Us by Sarra Manning, and The Rest of Us Just Live Here by Patrick Ness. I’m absolutely delighted by the increasing inclusion of multiracial characters. Despite the opportunity though, the multicultural backgrounds weren’t all too pronounced in these stories.

Thankfully, all the authors I mentioned didn’t venture into the realm of tokenism. Sáenz and Heilig even qualify as “own voice” authors — authors who write about characters who mirror their own cultural backgrounds. After all, representing for the sake of representation isn’t something I advocate. What I do support is greater diversity of ethnicity in YA literature.

Books foster empathy. That is why I believe diversity in literature is important. During my teenage years, I found only one book about a biracial character. I don’t recall the title but it was about a Filipino-American girl visiting her relatives in the Philippines for the first time. It meant so much to me to read about someone discovering her roots. Knowing that there were others out there who also could relate meant the world to me.