Disclaimer: There are spoilers for the first book in the series, The Rosie Black Chronicles. If you have not read Genesis yet, you might want to check out that review instead. 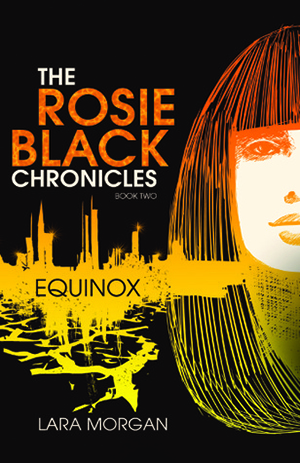 Rosie turns seventeen and she’s starting her first year at Orbitcorp Academy, but it’s not going to be all parties and pilot training. Helios hasn’t forgotten her – and she certainly hasn’t forgotten them. Bent on revenge Rosie is still working in secret to try to take them down.

But a terrible miscalculation will send Rosie once more on the run, this time into the unknown lands of the north, Gondwana Nation, where word has it Helios is building something big.

There will be a new friend and a new boy – the handsome and wealthy Dalton Curtis – who will surprise Rosie with a secret she can’t begin to guess. And Pip will return, but how does he feel about Rosie, and where has he been?

Pursued again and on the run, Rosie might not have time to find out all the answers, but what she will learn is that a capacity for evil can be equalled by a capacity for good - and she will be forced to make a choice that will change her future forever

Equinox continues right there where Genesis left off. True to all the twists and turns encountered in the first book of the trilogy, this book serves up many surprises. In the same vain, it was also confusing. Once again, questions spring to mind about who belongs to Helios, who belongs to the Senate and who is following Riley. With all the double crossing and switching sides business, I do recommend reading the books one after the other instead of waiting it out and forgetting about the plot altogether.

A new boy enters her life, Dalton Curtis. He’s popular. He’s charming. Every girl has eyes for him. Except Rosie. She knows Helios hasn’t forgotten about her, so she’s trying to lay low. Doesn’t help that Dalton has noticed her and she has no idea why. With Pip still in the picture, I’d say that as a result, the plot hovers dangerously around another love triangle. Thankfully, The Rosie Black Chronicles is more about the action and a lot less about the romance, so it didn’t bother me all too much who liked who.

The writing is solid, the plot well thought out, and the characters all have a reason for existing. Lara Morgan knows how to keep her readers on their toes because nothing is necessarily what it seems at first. Just like Rosie, readers can’t be sure who is an ally and who is an enemy. The narrative was very thoughtfully put together. I enjoyed the third person omniscient perspective, which definitely helped propel the plot forward from the beginning all the way to the end.

Since this is the second book in the trilogy, a cliffhanger is to be expected. I don’t think it’s a secret that I dislike cliffhangers. They tend to be so abrupt that the books in hand feel incomplete and really just exist, so that readers will buy the next book. But I didn’t mind it so much with Equinox. Perhaps knowing I could immediately crack open the next book helped. Still, I think issues pertaining to this particular book were wrapped up well, while at the same time paving the way to the concluding book.