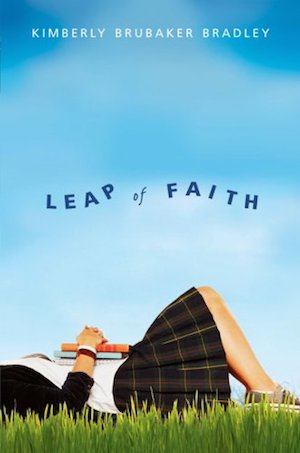 Abigail is starting a new middle school, a Catholic school, because she's been expelled from her old one. She's sure that this place will be just the same as the last, and no one will listen to her here either. Even her parents don't seem able to really hear the truth about what happened at the previous school. But now she finds herself in a community of people who do listen, who want to be her friends, and who help her discover a talent for theater that she never knew she had. Converting to Catholicism began merely as a way to annoy her parents, but quickly it becomes more. Could she be developing real faith? Kimberly Brubaker Bradley masterfully tells the tale of Abigail's spiritual journey and the faith that comes to those who need it.

Books about religious exploration somehow fascinate me, so much so that I went ahead to request Leap of Faith from the public library’s repository. Older books that are out of print or for which there are only a copy left are usually pulled from the shelves and kept at the repository. Library users who wish to borrow these books need to pay a small fee to reserve them, so that they can pick them up from their nearest library. I must say, I’m glad I specifically requested this book.

Leap of Faith was entertaining, to say the least. Those who grew up in a church will take so many things for granted. Those who didn’t though, will be extremely lost in a church. Abigail, who grew up in a family that didn’t care much for religion, had no idea what the church stands for or who God is. Forced to attend a Catholic school in sixth grade, Abigail is also forced to take part in religious class and to attend school Mass every week. Needless to say, the first time she attends Mass, she has no idea what the expected conduct is, and asks countless questions, much to the chagrin of her teacher.

The characters have depth and continually grow throughout the book. Abigail clearly gains greater maturity, as does Chris, who becomes a very good friend to her. Aside from religion, drama also becomes an integral part in Abigail’s life. While she has no real interest in it at the beginning, she eventually becomes very passionate about it, which shines right through the pages. Abigail is someone who even at the age of 13 has a strong outlook on life and is very self-assured. Once in a while that translates into stubbornness but who isn’t stubborn as child, especially towards their parents?

Ultimately, Leap of Faith is a book that explores faith, beliefs and pursuing one’s passion. It’s the kind of book I wish I had discovered when it when it was first published and I was still 16. Nonetheless, I enjoyed it tremendously even today and would recommend it especially to younger readers.