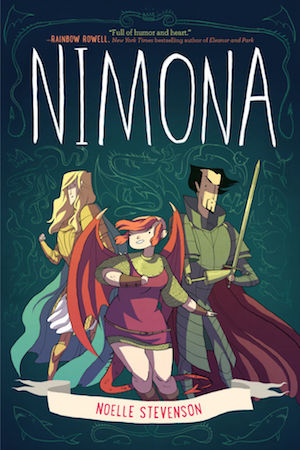 The graphic novel debut from rising star Noelle Stevenson, based on her beloved and critically acclaimed web comic, which Slate awarded its Cartoonist Studio Prize, calling it “a deadpan epic.”

Nemeses! Dragons! Science! Symbolism! All these and more await in this brilliantly subversive, sharply irreverent epic from Noelle Stevenson. Featuring an exclusive epilogue not seen in the web comic, along with bonus conceptual sketches and revised pages throughout, this gorgeous full-color graphic novel is perfect for the legions of fans of the web comic and is sure to win Noelle many new ones.

Nimona is an impulsive young shapeshifter with a knack for villainy. Lord Ballister Blackheart is a villain with a vendetta. As sidekick and supervillain, Nimona and Lord Blackheart are about to wreak some serious havoc. Their mission: prove to the kingdom that Sir Ambrosius Goldenloin and his buddies at the Institution of Law Enforcement and Heroics aren't the heroes everyone thinks they are.

But as small acts of mischief escalate into a vicious battle, Lord Blackheart realizes that Nimona's powers are as murky and mysterious as her past. And her unpredictable wild side might be more dangerous than he is willing to admit.

Hype Led Me to Nimona

Nimona is something else. All I knew was that it’s a hyped up graphic novel and for someone clueless about them, I was looking for a place to start. I found my library had it, so I decided to borrow it and the rest is history. I thoroughly enjoyed Nimona for being so refreshingly different. While the style of graphics didn’t entirely match my taste, it was consistent and very well done. Coupled with the premise, I found myself wanting more when I was done and closed the book.

This book turned the idea of heroes and villains upside down. What’s a hero? What’s a villain? Why would a villain refrain from killing? Why would a hero be so self-serving? The modern pseudo-medieval setting has knights, dragons, battles and science all amalgamated to tell a new story. It’s drawn upon myths .

Initially Nimona reminded me of Pumuckl, a character by Ellis Kaut that has been popular on TV for decades. He’s a kobold that appeared out of nowhere in Meister Eder’s life and won’t leave. That’s how Nimona entered the story, so I was reminded of my childhood. The similarities however end at the red hair. Nimona’s dream is to be Lord Blackheart’s assistant, so she shows up unannounced and makes herself at home in the pursuit of villainy.

Packed with a lot of humour, Nimona also brought some fresh ideas to the table. It’s creative and challenges a whole lot of clichés. None of the chapters were predictable despite the incorporation of familiar plot points because they were reinvented and that I think was what charmed me the most. I spent so much time smirking while reading Nimona which means I appreciated the wry humour that seeped through the pages.