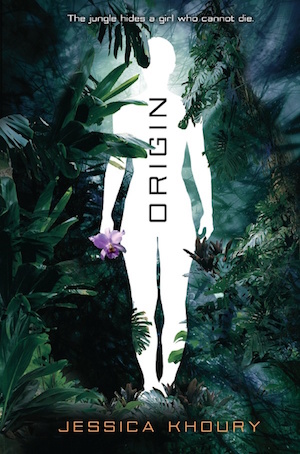 Pia has grown up in a secret laboratory hidden deep in the Amazon rain forest. She was raised by a team of scientists who have created her to be the start of a new immortal race. But on the night of her seventeenth birthday, Pia discovers a hole in the electric fence that surrounds her sterile home―and sneaks outside the compound for the first time in her life.

Free in the jungle, Pia meets Eio, a boy from a nearby village. Together, they embark on a race against time to discover the truth about Pia's origin―a truth with deadly consequences that will change their lives forever.

Origin is a beautifully told, shocking new way to look at an age-old desire: to live forever, no matter the cost.

What Drew Me First

Truth be told, I picked up Origin only because I saw the cover of Vitro, which I thought was gorgeous. I loved it the moment I laid my eyes on it and when I learnt that it’s the second book in the series, I decided I had to read the first, so I would have a reason to hold the pretty white cover with the test-tube that contains clear blue seawater and and island. Shallow, maybe. But what does it matter if a cover makes me pick up a book?

The point of book covers is to make people pick up a book. So yes, I had not idea what Origin was about besides that it’s science fiction. I didn’t look up reviews, and barely even glanced at the blurb. With that, I started reading, knowing almost nothing about the book. Exciting, right? Hah. And very satisfying too because I ended up reading a mind-blowing book!

What Origin is About

Origin is not for the faint of heart. It puts morality into question and also the pursuit of science. Let me back up though before I elaborate on those issues. The main character, Pia, is a 16-year-old girl, going on 17, with one sole dream: to become a scientist. More specifically, a scientist on the board of scientists that has worked over a century to genetically engineer a superior human race. She is the first human truly superior because it takes 5 generations to reach that goal, and that goal is immortal human beings. Pia is that, immortal. She cannot bleed, neither does she fall ill.

What it took to make her immortal is a mystery to her. Dr Paolo Alvez, known to her as Uncle Paolo won’t tell her until she is ready to step up to be a scientist herself. She knows that she owes her immortality to a special flower only native to the Amazon rainforest. Also the place she calls her home. Cut off from the outside world, she knows nothing about the people, the countries and the history of the earth. All she knows is that she would be in danger if they knew who she was.

Little Cam is where she was born and raised. Little Cam is her haven. Until she finds a hole in the fence and meets the people living in the nearby village. She recognizes that they are not scientifically advanced since they are tribal people but this boy, Eio, seems to know enough to plant seeds of doubts in her mind about the kind of research that has been done to create immortals like her.

Slight Issue with the Romance

The relationship and romance that ensues between Pia and Eio didn’t entirely make sense to me. I suppose that is one of the inherent problems behind instalove: there’s not enough time given for the characters to get to know each other. Sure, there’s the initial attraction but that hardly accounts for why anyone might be willing to put their life down for another. Usually I would’ve rolled my eyes at least but I was too distracted by what I deemed to be the main plot. Eio becomes a big part of it but to me, he remained mostly out of focus, a character who drove the plot from the sidelines, so that a conflict could be set up for the main character.

Ultimately, I was really drawn into the book because of the pertinent issues that are brought up. What is the goal of science? How do motivations factor in? Even if the intentions are good, is it right to reach for something that is beyond ourselves? As in the case of Origin, the aim of these scientists is to create immortal humans. Take away death. Sounds idealistic. It also makes for interesting thoughts of whether or not a genetically engineered human truly is human:

Then I remember that I’m immortal and that my body doesn’t work like everyone else’s. Who knows if I even can feel love?

See, humans aren’t just made up of their physical manifestation. There are thoughts and emotions as well that contribute to who were as humans. Then there also comes the sadness of having to see more deaths in one life than anyone ever will:

For these mortal humans, birthdays are a kind of countdown to the end, the ticking clock of dwindling life. For me, birthdays are notches on an infinite timeline. Will I grow tired of parties one day? Will my birthday become meaningless?

Reflections like these called into question the worth of being able to live forever. Instead of a victory, is it a curse more than anything else? At the same time, Pia’s motivations are balanced against her reservations. She wants to live with others of her kind, so it’s only natural that she aspires to be a scientist.

At some points, I felt myself questioning the science behind the book. I thought some aspects presented more magic than science. After some thought, I decided that it’s a good thing. Were it all technical without any form of mysticism, it would’ve felt too chillingly real because given the accelerated advance in technology, who knows if there aren’t some mad scientists trying to gain immortality? Besides, the mysticism ties in well with the Ai’oans, the villager nearby. They have their legends and their prophecies, which science cannot explain.

On a side note, Mitch Albom explores cryonics as an option to preserve life in his fictive work The Time Keeper. Issues like these are important to discuss, I think and I was glad to find this in Origin.

As for morality, talking too much about it would give too much of the plot away but Origin also calls into question the need to be “above morality” in order to engage in scientific research. If the end justifies the means is an overarching theme I found to be well-explored too.